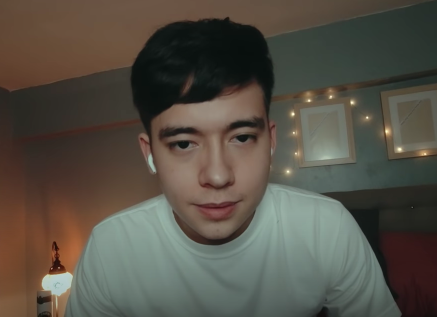 Starring in a boys love (BL) movie, “My Lockdown Romance” of ABS-CBN’s Star Cinema, does not impose serious pressure on Jameson Blake.

“I don’t feel that much pressure,” the actor said during the online press conference for the movie, Nov. 2.

“My Lockdown Romance” features Blake and Boyband PH member Joao Constancia. The movie comes in the heels of a wave of BL series in the country, spurred by the hugely successful and widely acclaimed “Gameboys” of The IdeaFirst Company, which will also soon be a movie and coming up with a season two. Black Sheep Productions of ABS-CBN Films also created its own hit series “Hello Stranger” featuring Tony Labrusca.

“I’m actually happy and excited on how the movie is going to be shown to the people because it is going to be a different style. It will be shown on social media and everybody would be able to watch at the same time [too],” he said.

Blake feels there’s not much pressure as compared to when he attends premiere nights of his movie in the past where there are so many people.

Wanting to try something new, Blake auditioned for a role in the movie and eventually got the lead part. He didn’t think twice about his character of Tom who suppresses his feelings for Kendrick (Constancia), his best friend from college.

“Hindi naman ako nagdalawang-isip (I didn’t have second thoughts). [Maybe] I was just making sure [because] I really like the role. I want to try something different. I just need more time to think about it if I wanted to do the role,” he said. “I just kept scanning the script and everything and eventually, nagustuhan ko ‘yung role talaga.” (Eventually, I really liked the role.)

When he learned that he’ll be working with Joao, he said he felt almost relieved.

“Basically, it was much easier for us because we’re friends. It wasn’t hard for us. We just need to do some adjustments,” Blake explained.

Blake is well aware that some fans are requesting a BL project with him and Joao.

“For me I’m happy that they’re happy,” he mused, citing some similarity between “My Lockdown Romance” and his first ever movie “Too Good To Be Forgotten.”

“It was also coming-of-age. I’d see some fans tweeting, they’d say, ‘do something similar.’ I felt excited for them at the same time,” he said.

Although he’s never been in a real life romance with another man, Blake was asked about three traits which can possibly get him involved in such a relationship. His answer: he could be romantically involved with a guy who is optimistic, respectful and adventurous.

Star Cinema’s “My Lockdown Romance” is available worldwide starting Nov. 13. It can be purchased for P150 with several Cinexpress channels to choose from: KTX.ph (ktx.ph) iWant, TFC (tfc.tv), channel 190 and channel 290 for HD on Cignal PPV, and channel 158 and channel 258 for HD on Skycable. JB