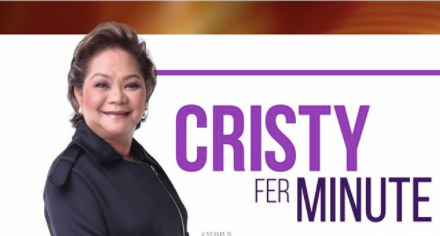 With seeming finality, veteran writer and radio host Cristy Fermin vowed not to work with Queen of Talk Kris Aquino in any future project.

This came after a botched online program which would have starred Aquino with Fermin, Lolit Solis and Mr. Fu. Aquino allegedly refused to work with Mr. Fu as she does not know him and because he is supposedly not in the level of Fermin and Solis.

Fermin spoke about the brouhaha in her radio show, “Cristy Ferminute” on TV5, Nov. 4, while having a banter with Rommel Chika.

They would work separately, though, with Aquino using the office of her manager, Erickson Raymundo, as her studio; Fermin, Solis and Mr. Fu would be streaming from Mga Obra Ni Nanay gallery owned by Fermin.

The show, to be produced by S&R and Puregold was supposed to air online for eight weeks.

Fermin stated that Solis shared with her Aquino’s text which said that she does not know Mr. Fu and that he does not belong to the level of Fermin and Solis.

Upong learning about it, Mr. Fu went to the comfort room of the gallery. Fermin followed and saw that the host looked like he just came from crying.

(I saw him. He was like this. “What did you do?,” I asked. “I just washed my face, mom,” he answered. Mr. Fu does not wash his face during “Take It Ferminute.” He already wears his make up when he arrives. What he does is just retouch. His eyes defied his heart. The man cried.)

With that, Fermin decided to back out from the program.

(Lolit, I don’t want to do the show anymore. “What a waste, right? It could have been additional income during the pandemic.” I answered, there is no extra income during pandemic for me when it comes to principles. If you will not do it, I won’t do it. And Mr. Fu will also not do it.)

(Manay Lolit said, even if you individually give us Puregold branches, we will not do the project if it is with you. As for me, whatever you do, whatever courting Chuck Gomez would do to me, Manay and Mr. Fu, forget it. I am willing to eat salt just so I do not have to be with you.)

Solis upset about Fermin being upset

Meanwhile, Solis has also spoken up about Fermin getting quite upset with Aquino over having Mr. Fu be subjected to a “trial” period.

(I am saddened that Cristy seems to be very upset and almost cried on the radio yesterday because she felt that this is the second time Kris has decided to get rid of our colleague: first is Wendell Alvarez, and now, Mr. Fu.)

(I do not know how my explanation that Kris is not comfortable with Mr. Fu, and wants him to have a grace period of four episodes, came across to Cristy.)

“I respect at hanga ako sa stand ni Cristy dahil [totoo] naman balewala ang extra income kung hindi ka maligaya sa ginagawa at gagawin mo,” she noted. (I respect and look up to Cristy’s stand because it is true that the extra income is not worth it if you are not happy with what you are doing and what you will do.)

(Everyone tried to persuade Cristy to still join the show because it is meant to air on Sunday, but she was firm in her decision because she was quite upset with Kris. I was the one left confused, because Mr. Fu was able to laugh at it, taking everything in stride while I was okay with it as I felt that everything we requested were given to us, so why not? I am sad for Cristy because I may not have told her Mr. Fu’s case properly, which is why she is angry.)

Solis then expressed her gratefulness to Aquino as she revealed that the latter actually reached out to them to join the talk show, as Aquino was supposedly meant to be a solo host.

(I just do not want Cristy to have ill feelings toward Kris if she did not fully get my explanation, because that is only a show, not something that should result in bad blood.) JB