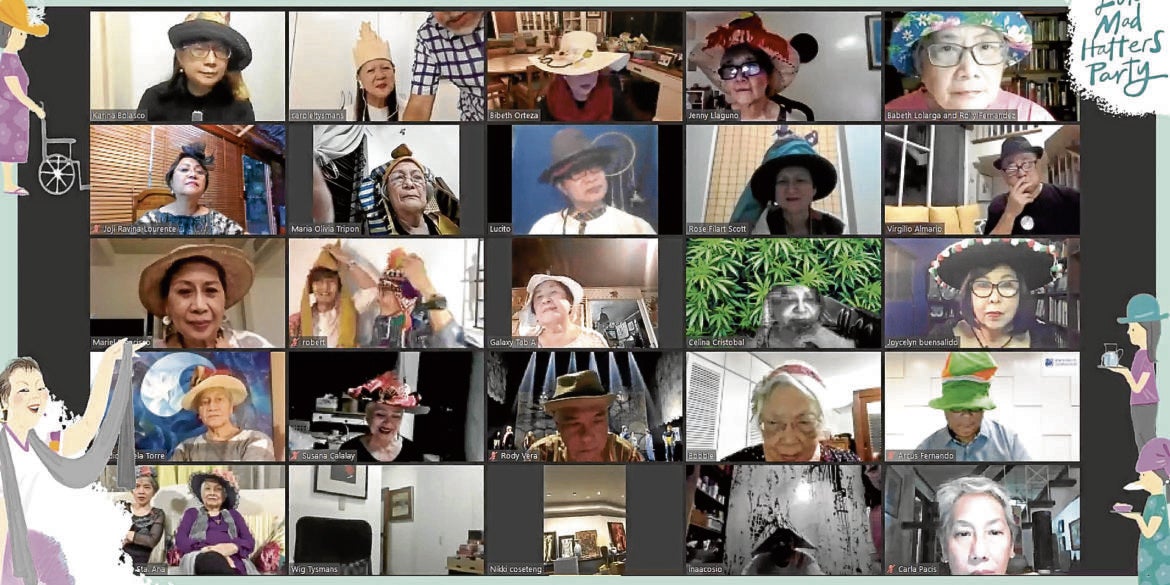 At 81 attendees at one point, the Halloween Zoom tribute to Gilda Cordero Fernando, billed the “Lola Mad Hatters Party,” was a smashing success, not counting those who watched the event live on YouTube.

Everyone whose life was touched by the woman described by emcee Kate Torralba as an “energetic force of nature” came wearing an assortment of hats.Gilda might have uttered from her heavenly post her typical bukambibig: “Ang cuuuuuttte!”

The tributes opened with a Fernando family-produced video for Gilda’s 40th day of passing Oct. 5. Son Mol narrated: “She responds to ‘GCF’ (as in GCF Books) to journalists and writer friends; ‘Ka Universe’ to comrades of her left-leaning Promethean cohort. One has to be off-kilter to warrant her attention, but as Danton Remoto writes, ‘Then and now, Gilda suffered no fools.’

“To family and the closest of her friends, she is ‘Lola Mad.’ Sorry to disappoint but the moniker isn’t rooted in the word ‘mad,’ adj., mentally ill; insane; though it seems totally apt.

“Sometime in the mid-’90s when the grandchildren started coming, growing and interacting with their grandparents, we began calling our dad, GCF’s husband Marcelo Fernando, ‘Fad,’ short for ‘father or Fader’ turning into ‘Lolo Fad,’ with ‘Mader,’ ‘Mad’ or ‘Lola Mad’ naturally evolving from there.”

Poet Danilo M. Reyes shared a video of another National Artist, Salvador Bernal, and Gilda speaking at the Ateneo Art Awards and defining what immortality is. To her it may even not be about awards or being a hero, but doing memorable acts every day, like living a life of honesty. In the end, she said, being immortal may mean being anonymous.

Journalist and fashion plate Myrza Sison listed the 10 lessons she learned from Gilda, on top of which was, “Love is not romantic but all about giving.” From the older woman she also learned that “the universe gives all the answers if you listen.”

Actor Banaue Miclat-Janssen sang her sister Maningning’s poem “Tawag,” set to music by Jesse Lucas, followed by a viewing of a Gilbert Daroy caricature of the late graphic designer Manny Chaves, Gilda’s best friend, and she herself in her pustoriosa glory.

Fictionist-activist Ninotchka Rosca, wearing a hairband made up of miniature hats, said each time she made a voyage to the homeland from the United States, she broke bread with Gilda. As a teenager meeting Gilda for the first time, she remembered the first lesson she received: light breathing and breathing light.

The members of the Lipstick Gang, aka GCF Fun Club, were captured partying with their icon with the music of Sampaguita’s rocking “Bonggahan” and Sylvia La Torre’s “Arimunding-Munding” in the background.

Writers Kris Lacaba and Kit Kwe, with their three small children afoot and stealing the show, thanked their wedding sponsor, Gilda, for being supportive in their creative endeavors. Kwe praised her for being “an ally of those who advance the interests of women.”

Writer Jeannie Javelosa read a short excerpt from Gilda’s essay “A Garden Story” from the latter’s memoir “Ladies’ Lunch and Other Ways to Wholeness.”

The Women for the Ouster of Marcos and Bases wowed as they shimmied and shook to Ricky Martin’s “She Bangs.” Narrator Nikki Coseteng credited Gilda for banging the drums of history loudly. Seen dancing a mix of jazz and cha-cha were such parliament of the streets figures as Coseteng herself, Joji Ravina-Lourence, Daphne Ceniza, Judy Taguiwalo and Vikky Bondoc Cabrera.

Bodjie Pascua and partner Avic Ilagan reminisced about the Gilda who’d invite them to her home—they’d start chatting at lunch and end when it was already dark. He said, “We enjoyed each other’s presence moment by moment. Gilda, you’ve really enriched our lives.”

The women of the Center for Health and Creative Arts (Chacra), led by Mariel Francisco, also gave an audio-visual presentation (AVP) to the tune of Cohen’s “Dance Me to the End of Love.” Gilda joined Chacra activities like a climb of Mt. Banahaw through rugged terrain to learn its sacred mysteries and debuting as a lecturer of the Goldies Workshop for senior citizens.

The Chacra women exclaimed: “Oh Mother G! It was you after all who led the way to the Age of Aquarius! Look behind you! We’re trailing right behind!”

Social anthropologist-writer Melba Maggay read a poem for Gilda, which told of how bereft and orphaned the people she left behind are. At the same time, they wished her “Bon Voyage to the Sky World.”

Dancers-videographers Nonoy Froilan and Edna Vida showed a rare behind-the-scenes look into the making of the grand Gilda production “Luna: An Aswang Romance.” There were precious scenes of director Anton Juan going to the extent of correcting the movements of the actors at the ballet barre.

The First Draft group of 10 women writers, founded by Gilda in 2002, also presented an AVP to the music of “Body and Soul” by Tony Bennett and Amy Winehouse. First Draftee Chit Roces-Santos recalled, “Gilda taught us to be candid and not be afraid to be ourselves. She often chastised us for our timidity. ‘Readers can spot fakeness,’ she said.”

Susan Calalay, Gilda’s classmate in the study of anthroposophy under egghead Nicky Perlas, remembered how their teacher cast them as witches, which she thought they were at heart.

Acknowledged was Gilda’s support of her LGBTQ friends, from couples Rossana Abueva and Monique Wilson to Robert Alejandro and Jetro Rafael. The last two danced up a storm before Typhoon “Rolly” (international name: Goni) hit to the tune of Madonna’s “Material Girl.”

The people behind the “Umuulan Umaaraw Kinakasal ang Tikbalang,” led by playwright Rody Vera and director Jose Estrella, showed slides from the play based on Gilda’s book on mythological creatures “The Magic Circle.”

The chat box filled up with accolades for the tributes. PR maven Joy Buensalido wrote, “This is the best send-off party anyone could have given.”

Garrucho said, “It’s so amazing how many different sets of friends Gilda had!” Alejandro agreed: “We are so blessed by Gilda.” Writer Neni Sta. Romana Cruz asked, “Whose life did she not touch or influence?”