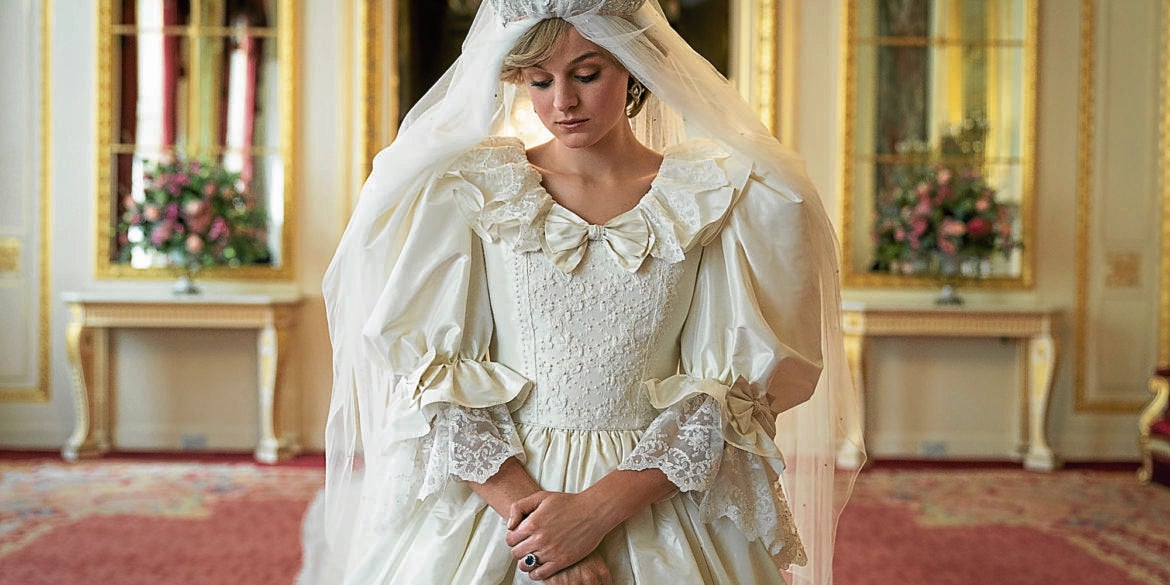 “The Crown” costume designer Amy Roberts wanted to create something that wasn’t an exact replica of Lady Diana’s original dress, but which captured the same spirit and style of David and Elizabeth Emanuel’s iconic design. —PHOTOS COURTESY OF NETFLIX

In the fourth season of “The Crown,” which starts streaming today, we finally get to meet a character that fans of the hit Netflix show have been waiting for: Princess Diana (played by Emma Corrin).

“It was an amazing thing to dress Diana,” said Amy Roberts, the show’s award-winning costume designer.

But she reminds fans that the Diana they’ll see in the fourth season, which covers 1979 to 1989 in the life of the royal family, isn’t the fashion icon the world fell in love with.

“In Season 4, she’s starting out on her journey. So we see a very, very young unformed Diana. She’s 18, 19. She’s not remotely fashion-y. She’s just a young girl with not a huge wardrobe. She doesn’t have much fashion sense,” Roberts told Lifestyle in an interview over Google Meet.

Executive producer Suzanne Mackie refers to it as “Diana before she became the Versace Diana.” “This is the slightly more innocent Diana who would wear bright woolen, almost home-knitted jumpers, bright pinks and yellows,” she said.

Yes, Diana starts off young in Season 4, so young that the first time we see her, she’s dressed in costume for a school production of “A Midsummer Night’s Dream.”

“The whole thing was lovely. I just enjoyed doing this journey of a young girl who is then magicked away to a fairy tale, and then it all, as we know, goes wrong,” said Roberts.

Roberts, who joined the show in the third season, said that things have gotten easier for her, now that she’s gotten the hang of what “The Crown” writer and creator Peter Morgan calls “The Crown” DNA. A big part of that is the incredible attention to detail that the show is known for—and that’s something that’s evident in the work of Roberts and her team.

“Everybody on screen, whether you’re a passerby in a London street, or you’re the Queen of England, are all fitted. My big thing is that they’re all as important as each other, so everybody you see is fitted. It’s quite a big task.”

And to fulfill that task, Roberts has a big team—a team of 20 on a regular day. “They make all the principal costumes you see, apart from the men who have tailors and various other characters,” she said.

Roberts finds the mix of historical accuracy and artistic license that she gets to play with interesting. “I’ve never done a job like this where there’s a mixture of accuracy and naturalism.”

Some costumes, she said, need to be “forensically accurate,” clothes from key moments that people can remember or look up. “There’s no point suddenly putting them in something else. But then there’s lots of moments in between where we don’t actually know what they did or said where you can be more imaginative and filmy and glamorous. It’s a brilliant job for that mixture, you’re kind of grounded by certain events then you can fly free with lots of other situations.”

One of those key moments, of course, is the wedding of Prince Charles and Diana. David and Elizabeth Emanuel had designed the ivory taffeta and antique lace gown that Diana wore in her 1981 nuptials. To recreate the look, Roberts and her team, including Sue Crawshaw, who had the task of making the dress, met with David Emanuel. “He came in with copies of the original drawings,” Roberts said.

Her first question for him: What color? “I had color choices for the dress because you know it’s quite hard, you look at photographs and you look at film and you’re never quite sure what that color it is. Is it going toward cream, is it going toward slightly pink-y? We had them all laid out and David said, ‘That one.’”

Roberts’ plan had never been to replicate the dress, and Emanuel supported that. “He was the most generous, funny, lovely man, and he sort of gave us permission to just get on with it because you could get a bit overwhelmed with that. I think my job was just to create for people what they knew about that, what they felt about that, just this incredible fairy tale, every little girl’s fantasy of what a princess is going to look like. As I like to say, there were 2,021 pearls on the bodice. That wasn’t my job to do that. It was to just give you an idea of it.”

A regular costume on “The Crown” requires two to three fittings but not Diana’s wedding gown. “It was quite a long job. And we probably had about five to six fittings with Emma, which is immensely exciting.”

Three people worked on the dress for four weeks. It took 600 hours, 95 meters of fabric and 100 m of lace to complete it. The lace trim they used was recreated by the Nottingham factory that made the original lace.

“One of the successes of The Crown is the reengineering of these costumes that we are familiar with,” said director Ben Caron.

According to Roberts, “Every time we shot in that dress, it needed its own transport, really. And the veil, as you know, is 25 feet long, so we had to have three or four people just to deal with that dress.”

The dress caused a stir even among the people on set. “The crew was all really busy setting up, and there was a ripple that you could feel coming from the corridor that then very quickly came into the room as Emma walked in the wedding dress. It was like a chill going through the room and everyone just went silent. I guess that image itself is so powerful that to see it just gave everyone pause. It was probably the only time I’ve experienced something like that, and very unlikely I’ll experience it again. Everyone just stopped what they were doing and time just sort of stretched,” said Caron.

The wedding gown wasn’t the only memorable costume Roberts’ team created to help Corrin bring Diana to life. All in all, they made 80 pieces for her, with 17 outfits just for the important 1983 Australia tour Diana and Charles (played by Josh O’Connor) go on in Episode 6.

“You walk into Amy’s office at Elstree and it’s just wall-to-wall pictures of Diana in every single outfit of hers that we remember,” said Mackie.

One of the challenges for the costume department was sourcing the right fabrics for those tour outfits. They succeeded by using a mix of vintage fabric and dyeing more modern ones.

Corrin said working with the costume team was her favorite. “We had such a fun time. Diana’s wardrobe is like a character in itself,” said the actress. “She had so many outfits, especially in the later episodes when she started taking more risks and being more playful with fashion. She had this YSL bomber jacket which was so great. I loved her casual stuff, the jeans and jumpers were very her. Her fashion marked such a change in the royal family. It kind of modernized them quite a lot and she took it to another level, working with designers, going to the Met Gala.”

And there will be more of her to see in the fifth season. Roberts said, “It’s a young girl starting out and finding her way, both in her look and the designers that she uses. So really, it’s just the tip of the Diana we know, and I think Season 5 will be more about the Diana that probably people remember, that kind of glamorous fashion icon. She’s only just starting out really now.”