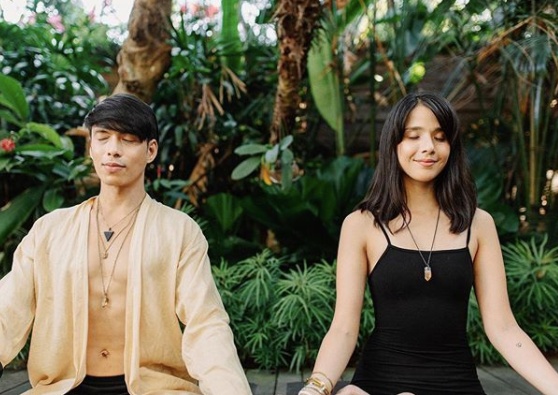 Actress and yoga instructor Maxene Magalona, based now in Bali with her husband, musician Rob Mananquil, will undergo a 10-day Vipassana meditation silent retreat with him.

Magalona cited several reasons for joining the retreat as per her Instagram page last week.

“One of the main reasons why we decided to join this retreat is because ever since we’ve been beautifully stranded/divinely placed here in Bali during this pandemic, we decided to study and take as many courses, workshops and retreats that we can which we know will help us heal, grow and become the best versions of ourselves,” she said.

“We really believe that this global pause is the best time to unlearn old and unhealthy habits to make space for new and helpful ones,” Magalona added.

The couple learned about the Vipassana meditation technique from Mananquil’s sister Raya Mananquil DeLeon who was the original yogini in the family.

“She did it many years ago and said that it was one of the toughest things she ever had to do but also one of the most rewarding,” Magalona said.

The couple was so inspired by her that they decided to do the retreat themselves to have a personal experience of what it is all about. She said Rob wanted to do it at the beginning of the year in the Philippines but their schedules did not permit it, and she admitted to not being ready yet at that time.

“Now that we’ve been praying to God to send us messages about which steps to take on this healing journey, one of our yogi friends here in Bali told us about the Vipassana retreat with @meditationdave of @the_yogi_lab which he took last September and said that it was one of the best decisions he had ever made,” she shared.

Magalona also spoke about how she saw the sign that she and Rob needed to join the retreat.

“He said he loved it so much that he decided to join the one in November which happens to be on the 11th until the 22nd. When he mentioned the dates and we noticed that it ends exactly one day before my birthday, we took it as a clear sign from God that we were meant to do this,” Magalona revealed.

Magalona believes that the retreat will help her heal since this meditation technique is known to address complex post-traumatic stress disorder, the mental health condition which her psychiatrist diagnosed her with.

“My birthday wish is for more people to meditate with us during this transformative experience so that we can all help the world recover by healing ourselves,” Magalona said. JB

How Francis M showed up for Maxene Magalona’s wedding