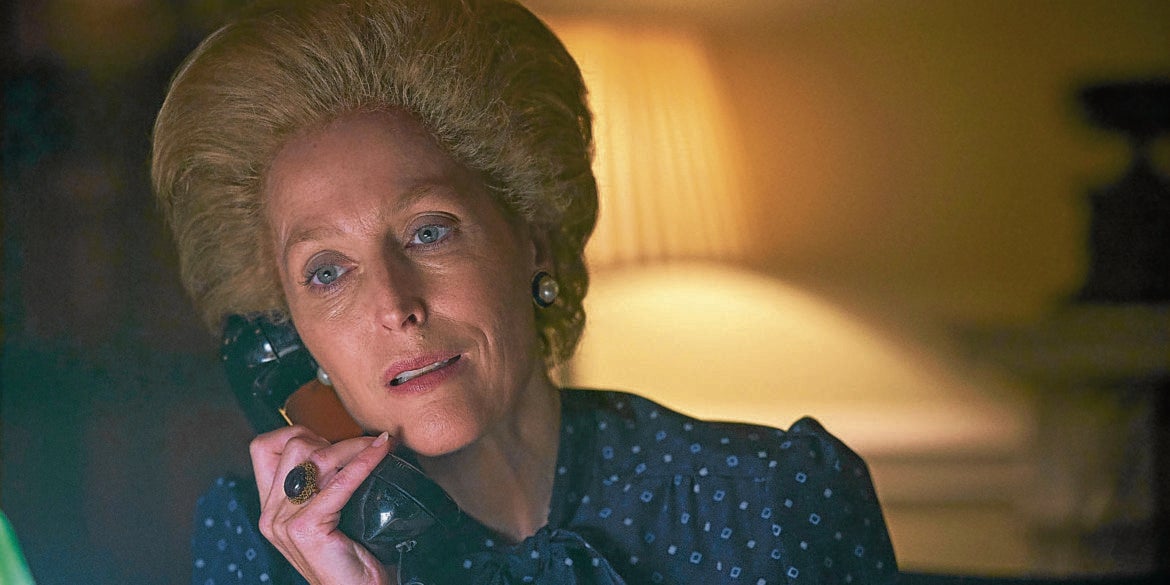 Anderson is superb as Thatcher with that iconic hair. NETFLIX PHOTO

The fourth season of “The Crown” has been streaming for just a week, but fans of the show are already predicting awards for Gillian Anderson’s brilliant portrayal of Margaret Thatcher, the United Kingdom’s first female and longest-serving prime minister.

Her scenes with Olivia Colman, on her second season of playing Queen Elizabeth, are so delicious to watch—two powerful actors playing two powerful icons. Anderson quoted Prince Philip, who described Thatcher and the queen in the show as “two bears who can’t live in the same cage.” (Warning: some spoilers ahead.)

The wigs, makeup and clothes help these seasoned actors step into their roles. “Once you get all the garments on, you feel, ‘Oh, cool.’ It all helps,” said Colman. “My job is three-quarters done before I step on set. [Costume designer] Amy Roberts and her team are as dazzling and brilliant as the makeup team. One of the most impressive things is that they can recreate an iconic outfit by finding cheaper fabrics and paying attention to the detail. I loved my fittings… They knew how to adapt something to fit my very different shape to the queen’s. They are highly skilled.”

Anderson transformed into Thatcher with research, that iconic hair (each principal character supposedly has six wigs and each one takes three weeks to make), clothes, a little makeup and a lot of talent—she mastered the prime minister’s strained mouth without the use of prosthetics.

To prepare for her role, Anderson dove deep into the research process, so much so that “The Crown’s” head of research Annie Sulzeberger said that Anderson is welcome to join her team anytime.

Anderson said of her character, “I think I pretty much watched everything there was to watch on her… She had such a specific way of speaking and moving and divided people so thoroughly that showing all sides of that kind of character becomes even more vitally important and challenging.”

The real Thatcher and the real queen had over 200 audiences, but on “The Crown,” we see this prime minister have her Tuesday meeting with the queen 11 times.

Colman said, “On the face of it, Elizabeth and Margaret should get on. They are the same age, have the same drive, same devotion to their fathers, same work ethic. But yet they don’t. It’s not the beautiful friendship that the queen hopes it’s going to be at the beginning.”

“It was fun to have those horrible moments with brilliant Gillian,” said Colman.

Sometimes the tension can be wickedly funny. The Balmoral episode (Episode 2) is memorable and one that offered quite a few laughs. In the episode, Thatcher and her husband Denis are invited to holiday with the royal family in Balmoral. There, they fail the Balmoral test miserably—and their inappropriate clothes are a big part of it.

“It’s the kind of episode which is quite light and quite funny, really, seeing this very powerful intelligent woman out of context and out of place and so we wanted to really push the color palette,” said Roberts.

“Places like this are all about what you wear and when,” said Thatcher in the episode. And she made a big mistake when she and her husband overdressed for dinner.

Roberts said, “Director Paul Whittington and I talked about that a lot and we felt very strongly that she is a very urban woman and she’s sort of thrown into this rural… we couldn’t get more country than the Scottish Highlands. Most of your other characters are all in very gentle natural tones and countryside colors and then there she is in sort of man-made fabrics rather than God-made colors.

“We really wanted to push that kind of separateness of her from this established family who are completely at ease in their surroundings. We just wanted to push for once, Thatcher being out of her comfort zone. Color choices are very important so that very vibrant purple-y color we felt kind of said that, really.”

The next day, while the royal family are comfortable in their tweeds, wools and Wellington boots—clothes that are ready for getting muddied—Thatcher shows up to go stalking with the queen in a royal blue dress, a scarf, pearls, purse and heels.

“Say nothing,” the queen tells her family.

“Again, she’s in the most inappropriate color and outfit for stalking in the highlands. It’s the one time for her that it’s quite funny,“ said Roberts.

The rest of the time, though, Thatcher is the epitome of power dressing: blazers and suits and tailored dresses. Her style evolves with the fashion changes of the decade and also as her political stature changes.

“As she increases in power, she creates a personal style to project her political values, adopting the ‘power dressing’ of the 1980s,” Roberts said. “She could use this look to great effect wearing wide-shouldered, strongly tailored suits, but cleverly softening this by wearing pussy bow blouses.”

“Amy’s given Gillian’s Margaret Thatcher a really beautiful line, she’s got a really beautiful silhouette,” said executive producer Suzanne Mackie. “So, she looks both smart and authoritative but there is something almost sexy, I would say, about her appearance. That’s not just because Gillian is playing Margaret Thatcher; there’s something about the way Amy’s dressed her, and it feels entirely right and authentic.”

As for the queen, we see a wardrobe that’s more muted in the fourth season. Fewer pinks, lilacs and blues and more of what Roberts calls “middle-age colors.” “The queen is really established now on the throne. Her family is growing up. Her marriage is more sorted. So I felt the palette somehow needed to be steadier particularly for the queen. It’s not as fresh and not quite as vibrant as it was in the ’60s.”

It wasn’t just colors that changed. “Shapes are a big difference, wider shoulders, bigger, looser tops, narrower skirt and trouser shapes. Toward the mid-’80s, the power suits hinted at more confidence for women in the workplace, they were very fashionable as seen on Margaret Thatcher,” said Roberts.

Colman’s queen seems softer and warmer this season, the last season we’ll be seeing her in the role (unless there are flashbacks). Imelda Staunton is replacing her in the show’s fifth season to play an older version of the monarch.

A memorable outfit for the queen in Season 4 is her Trooping of the Colour uniform, made by tailor Sophie Guerrier. Colman wears it with a tricorn hat with regimental plume. “That’s got to be absolutely forensically correct,” said Roberts.

Because of its complicated facade, this costume took four fittings with Colman before it was completed. The Trooping of the Colour uniform is just one of around 1,500 uniforms seen in the show’s fourth season. Four hundred costumes were created for the principal cast, each one taking around two to three weeks to finish depending on its intricacy.

Another tidbit from the costume department? The queen has six handbags, most of which were bought from the company that makes Queen Elizabeth’s bags.