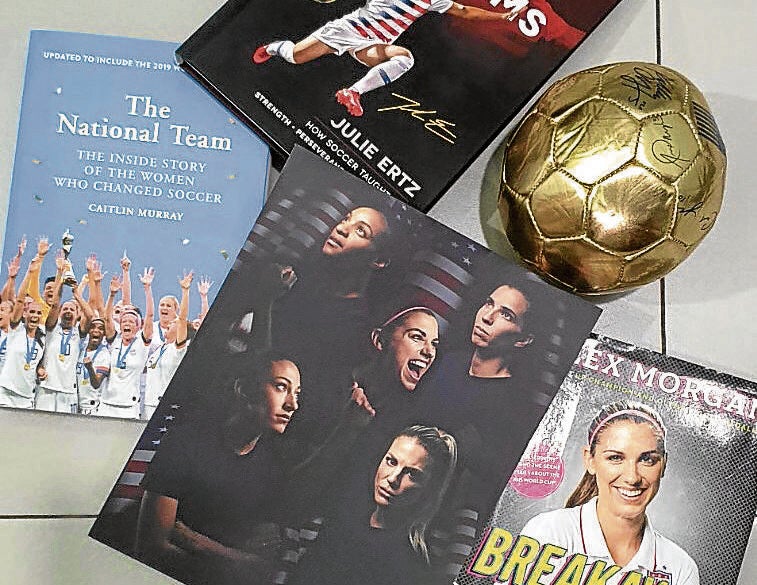 US Women’s National Team merch owned by the author

What it’s like to be part of a fandom

You’ve probably heard someone say that they were having a “fangirl” moment because of something or someone that excited them. This term has now evolved into a new related term called “fandoms.”

A fandom refers to a group of people who support the same thing or share the same interests. Some fandoms even create names for themselves, like Swifties (fans of American singer Taylor Swift) or Directioners (fans of pop band One Direction).

These fandoms can be supporters of anything. But the most common fandoms usually fall under these categories: sports (teams, athletes); actors, movies, TV shows; musicians, bands; and authors, books.

Fandoms today are created through social media which allow people to communicate even if they’re on opposite sides of the world. This means rapid increases in the number of fans and followers.

Although members of fandoms have a tendency to spend too much time on their phones, being in a group where you and your peers have things in common can also have an upside: It can help grow you grow network and improve your communication skills.

There have been times when world records were broken by different fandoms.

AlDub Nation, a fandom of the Alden Richards-Maine Mendoza love team, set the record for the most used hashtag on Twitter in a 24-hour period. The hashtag #AlDubEBTamangPanahon generated almost 41 million tweets in 2015 and was recognized by Guinness World Records.

What’s fascinating about fandoms is that interactions aren’t necessarily limited to social media. Some fandoms hold actual events or gatherings in order to bond more. Sometimes they even invite their idols to those events. Concerts, book signings, sports tournaments and meet and greets—it’s cool how one can make so many friends over the internet and then get to meet them in person. In some cases, fans would even travel long distances just to meet up with their newfound friends.

Fans also like to showcase their support for their idols by buying merchandise such as clothing, mugs, bags and more.

There’s more to fandoms than just showing love for their idols. Many fandoms form a deeper relationship, which encourages them to unite and support bigger causes.

Back in 2015, AlDub Nation organized a blood donation drive. Using the hashtag #ALDUBRedCross on Twitter, the fandom was able to donate 195 bags of blood.

I have been playing football for almost seven years now and I, too, have people I look up to. The US Women’s National Team (USWNT) was the 2019 Women’s World Cup Champion and is one of the best teams in the world. I am proud to be part of the USWNT fandom.

I watch their games and show my support by buying their merchandise and posting updates on social media. The team’s skills and intelligence as athletes have helped me overcome challenges and given me valuable lessons that I could use on the field.

Being part of the USWNT fandom has taught me lessons that I can apply not only to my life as an athlete, but in my personal life as well. I’ve met a lot of people online, some I even consider my close friends despite most of them being miles away. It’s amazing how meeting new people online has immersed me in different cultures and traditions, helping me understand the world a little more.

What makes my fellow fans so admirable is how passionate they are. They go the extra mile to show their support in different ways, whether it’s staying up all night to await a release or announcement, or traveling to a different country to meet the people they look up to.

Fandoms aren’t only limited to doing things related to their idols. Sometimes they even create charity events to help the public, raise awareness and simply unite to help those in need.

It’s a pretty crazy ride being part of a fandom. But it’s the easiest way for you to meet new people, help others and have fun. —CONTRIBUTED

The author is a 17-year-old student of Assumption College San Lorenzo.