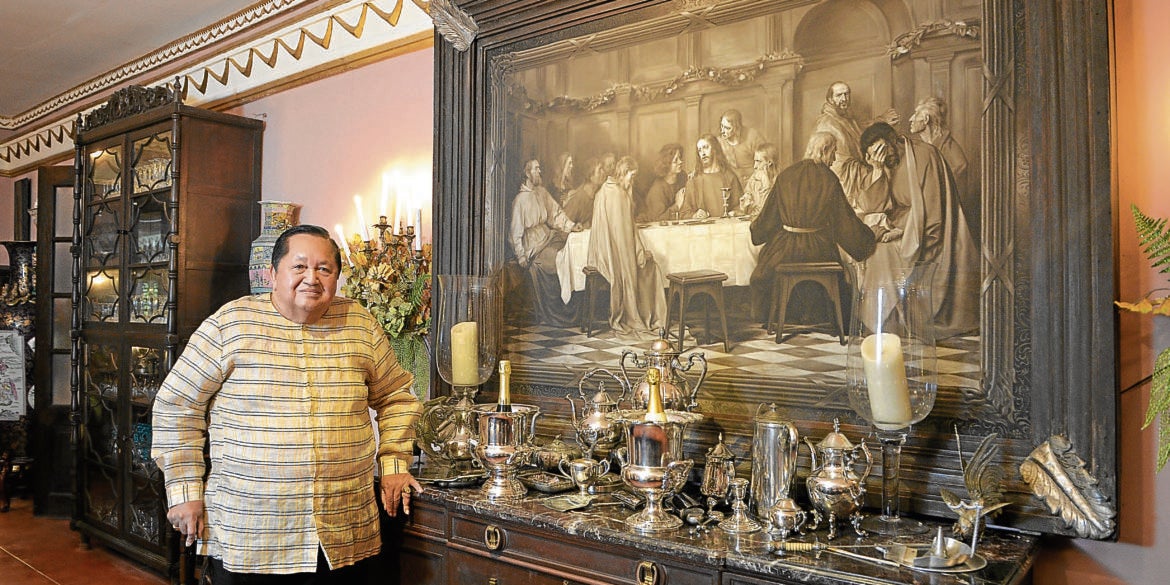 The last of the great party icons

November saw the demise of two icons that made an impact on the country’s social history.

Public relations and events consultant Luis “Louie” Cruz died from lung cancer at age 71 on Nov. 20. On Nov. 21, visionary culture advocate and patron Conrado “Ado” Escudero died of a lingering illness born out of pulmonary complications and comorbidities. He was 87.

Cruz and Escudero were popular in high society not because of their pedigree. They were admired for their theatrical style, solicitous hospitality and big hearts.

Escudero grew up surrounded by artifacts and antiques collected by his hacendero parents, Arsenio and Rosario. He was likewise exposed to lavish entertaining when his parents hosted VIPs in their home in San Pablo, Laguna, and served as patrons of town fiestas.

Living the gente de razón (a term for the culturally Hispanicized) lifestyle shaped his involvement in heritage conservation, his dress code, entertaining style and celebratory nature.

As a member of Patrones de Casa Manila—supporters of a museum in Intramuros—he helped organize colonial-style events and urged visitors to wear Hispanized Filipino costumes. He was also an important supporter of the Cofradia de la Inmaculada Concepcion Foundation and the Intramuros Administration, organizers of the Grand Marian Procession in December.

In cultural tourism, Escudero’s biggest accomplishment was converting the family plantation in Tiaong, Quezon, into a heritage village, which featured historical tours, museums of his ancestors’ collections, live entertainment and dining at the foot of the waterfalls. Because he loved theater, Villa Escudero had its own rondalla, folk dance group and production crew to make the sets and costumes.

Following family tradition, Escudero sponsored the Holy Week procession in San Pablo. On Easter, Villa Escudero resort would commemorate the Feast of the Ascension of Christ with a fluvial parade, Latin Mass, symphony orchestra, choirs and a guest singer.

As the venue of Escudero’s epic birthday parties, the resort would be packed with a thousand guests, mostly Manila’s elite and the diplomatic corps. The themes ranged from colonial-inspired Filipiniana to Old Hollywood, with Escudero dressed as director Cecil B. DeMille. The most memorable was the Hawaiian theme party in the ’80s. Dressed up as Kamehameha the Great, founder of Hawaii, he made his grand entrance with drum beats and arrived on the scene, floating on the barge along the river.

Emperor of the world

That dramatic arrival was repeated in 2013 for his 80th birthday, which Escudero said would be his last epic bash. This time, he was dressed elaborately as the Emperor of the World. When his barge docked, he was transferred to a portable throne lifted by hunks that carried him to the pavilion. As in his previous birthday parties, 150 costumed guests joined his parade. The guests were entertained with gay impersonators, and singers Gary Valenciano and Dulce. It was always an overnight event where guests were fed six to seven meals.

His last birthday celebration on Aug. 13 was simple by his standards. Following health protocols, some 120 guests came for a Filipino merienda buffet. “Until the end, he was still entertaining even if he was wheelchair-bound and had breathing difficulties,” says Tesoro.

His wake and funeral were celebrated in the family tradition of pageantry. People from the resort were dressed up in period costumes as they marched to the chapel. His remains were buried in the family mausoleum.

“An era has gone by,” says Tesoro. “We used to go to parties at a drop of the hat from the ’60s to the ’90s. The partygoers were getting older. Times have become challenging.”

For the love of laughs

Design maven Antonio “Budji” Layug recalls Louie Cruz as a livewire in the Ateneo grade school and high school. “Louie was already zany then,” he says.

Cruz went to college in Letran and Bard College in New York. He cultivated his wanderlust when his father, Ambassador Jose V. Cruz, was posted in Germany, The Netherlands, the United Kingdom and the Middle East from the ’70s to the ’80s. To bide his time in Europe, he took up hairdressing at the Vidal Sassoon Academy in London.

He inherited his entertaining skills from his mother, Luisa, who was known as a great hostess in the diplomatic circles.

Cruz’s party style was inclusive. From the grand “Halakhakan” (amusement) party in the martial law era to Giraffe clubbing in the ’90s, his parties had guest lists that were always a mix of high society, creatives, power gays, professionals and status seekers.

Layug likens the “Halakhakan” party to a grand disco. “These parties were held in big venues such as the back of the Cultural Center of the Philippines, supported by a cast of thousands. You dressed as you wished, but he made the parties colorful with themes,” says Layug.

The nightlife mecca of the mid-’90s, Giraffe Bar at 6750 Ayala, became an intimate venue compared to the “Halakhakan.” Like its predecessor, the guest list was democratic. People would come alone but would end up gaining some friends.

To sustain the interest of its habitués, Cruz organized theme parties. In the Pajama Party, socialites dressed up in sleepwear while Cruz flashed his bikini under a robe.

But the clubbing wasn’t all merrymaking. He organized fun events to raise funds for charity.

In bohemian Malate in the late ’90s, Cruz was a partner at Politixx, a bar famous for gay revues. He would also hang out at Myther’s in Adriatico Circle. “It was like the battle of Fundador every night. He loved good food and good company,” recalls Annette Ablan, honorary consul to Belarus. At Myther’s, Cruz organized weekly gatherings with a resource person for the press.

In the zeroes, Cruz moved to Boracay to set up a restaurant with rooms for rent in a two-story building. It was named McSandro after his then partner, Sandro “Mike” Rieta, who once worked for McDonald’s. He trained the waiters and supervised the kitchen crew, living up to the standards set by his mother.

Wearing  his signature sarong, T-shirt and slippers, he and his partner would be downstairs at the restaurant having a good laugh. At night, Cruz would be bar hopping, doing karaoke at the Regency hotel or  oganizing dinners with resort owners. When prominent people such as Gabby Lopez came, he would arrange a magnificent dinner.

As Boracay became congested, Cruz and Rieta closed the restaurant and moved back to Manila. In the last decade, he continued to entertain in his condo, wearing his trademark off-the-shoulder shirt. “Louie pulled out all the stops so that people would feel at home,” says Ablan.

When friends came for dinner, he would lay out a dozen viands, all heirloom recipes. The most famous was the mechado, local beef stew.

Cruz endeared himself to everyone because he never judged people, says Ablan. “When there’s an issue, he would hear both sides. He was a good listener, such that people warmed up to him. He would analyze, look at things from different angles and sometimes played devil’s advocate.” —Contributed