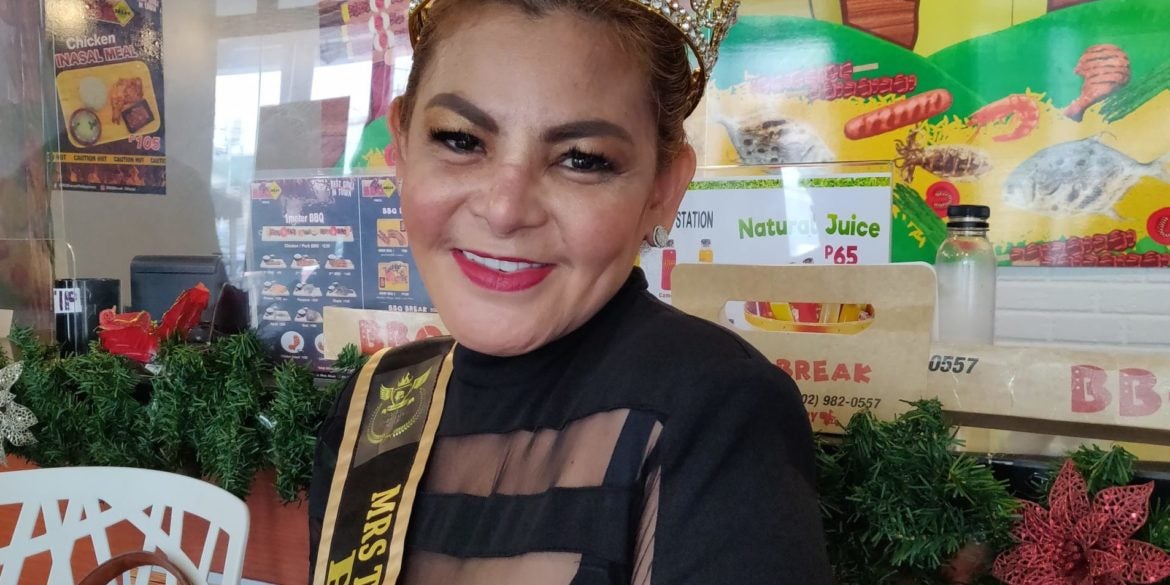 Single mother Aida Patana got an early Christmas present when she learned that she was chosen to represent the Philippines in the 2021 Mrs. Tourism Ambassador Universe pageant in Malaysia./ARMIN P. ADINA

MAKATI CITY, Philippines—A Cebu-based host and entrepreneur wants to inspire her fellow single mothers to be strong like her through her participation in a global pageant.

Aida Patana, who finished second in the 2019 Mrs. World Philippines pageant held in Paris, France, was chosen to represent the Philippines in the 2021 Mrs. Tourism Ambassador Universe contest in Kota Kinabalu, Malaysia, in February.

“It’s not too late. I’m happy that we have these ‘Mrs.’ pageants to give chance to those who are no longer ‘misses’ to pursue pageantry,” Patana told a small group of media scribes at the BBQ Break Pureza branch in Sta. Mesa, Manila, on Dec. 5.

“Us older women have a certain level of confidence, and I want to inspire my fellow single moms to also be strong and reach for their goals,” she continued.

Patana has been raising her five children all her own for 14 years now, and she has not asked her estranged husband for support. She now has four grandchildren who all inspire her to keep going,

The global pageant’s national director for the Philippines, Rodell Salvador, chose Patana to carry the country’s colors in Malaysia for her determination and innate strength as a woman.

“We’re not going there for sightseeing. We have to send someone who can win, and win big,” Salvador said.

“I have my full support behind our next representative,” the Japan-based Tsutaichi told Inquirer in an online interview.

This year’s competition will also have a category for men, 30 to 50 years old, who will vie for the Master Tourism Ambassador Universe title.

Joining Patana as her male counterpart is Gerald Barbacena from Pasig City, who competed in the recent Mister Continental Philippines contest.

Salvador said before Patana leaves for her international competition, she will undergo an intense training regimen to sufficiently equip her, especially for the question-and-answer round.

He said the Malaysian organizers did not require a two-week quarantine for Patana upon arriving in Kota Kinabalu. They are just waiting for flights to be open for inbound visitors.