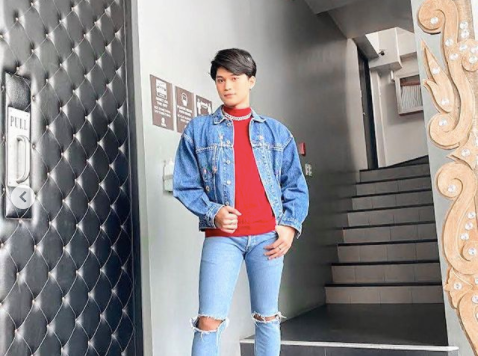 (Yes, I get giddy over him. Keann is a gentleman and very caring on the set. He is a straight guy.)

Lindayag, who is openly gay, revealed that the movie is meaningful to him because Johnson’s mom is lesbian.

“He has said that in a lot of interviews. Isa sa mga rason kung bakit niya tinanggap ang proyektong ito is because ‘yung story ng community natin, it’s something na nakaka-relate siya kasi his mom is also part of the community,” he said.

(One of the reasons why he accepted the project is because [it is] the story of our community. It is something he can relate to because his mom is also part of the community.)

As to Johnson’s other personal traits, Lindayag finds his co-star highly likable, something that is also evident in the film.

(You will see it in the movie and even in person, when we’re together, when you look into his eyes, you will seriously melt because he is so sincere when he speaks.)

Lindayag, even before shooting the movie, is already familiar with Johnson since they have previously done a movie together with Trina Legaspi and Mariel Pamintuan.

But despite his admiration for Johnson, Lindayag does not see his co-star as boyfriend material for himself.

(I don’t fall in love or I don’t get attracted to straight guys. Because I’m gay, I want to make sure that I get into a relationship with another gay man.)

Still, Lindayag was candid to admit that some of his celebrity crushes are straight, such as Drew Arellanao, Robi Domingo and Ryan Agoncillo.

When it comes to relationships, Lindayag is quite conservative. His relationships have got to have the blessings of his parents.

“The Boy Foretold By The Stars” is one of the official entries in this year’s Metro Manila Film Festival. It is a Boys’ Love (BL) tale about two senior high school students who meet at their all-boys school’s retreat. There, they develop a special friendship.

The film is written and directed by Dolly Dulu and produced by Jodi Sta. Maria of Clever Minds Inc., The Dolly Collection and Brainstormers Lab. The streaming of the movie via upstream.ph will start on Christmas Day, Dec. 25. It can also be availed through “My Shows” for those with GMovies accounts. JB