Merry Christmas, in spite of it all | Lifestyle.INQ ❮ ❯ 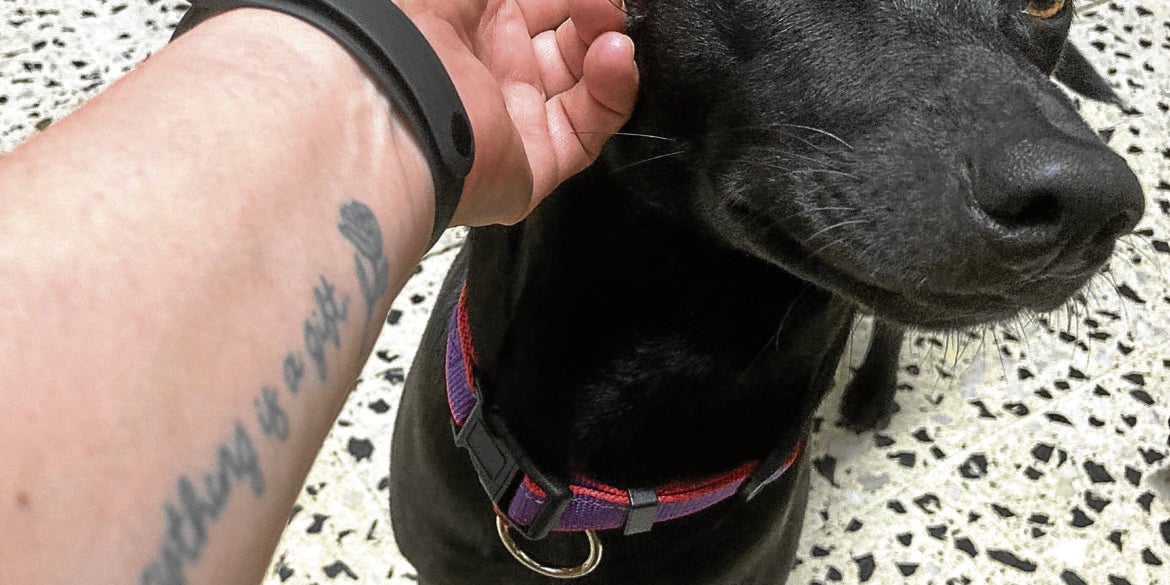 The author shows off her tattoo while petting Frankie, one of her year’s biggest blessings.

Merry Christmas, in spite of it all

You don’t become grateful because you’re happy; you become happy because you’re grateful, and living in gratitude is probably the best mechanism for survival in times like these

A couple of years ago, I read this essay in Huffpost by Tracy Brittis, whose bout of throat cancer left her permanently unable to eat any food, except through a tube—a reality aggravated by the Thanksgiving holidays. Imagine never being able to savor your favorite dish ever again, a thought that would drive many to utter despair. Yet, she amazingly learned to look beyond what she had come to see as a small price to pay for still being alive.

“With every small bite of food or sip of wine, the body releases chemicals that make us feel good,” Brittis wrote. “But feeding the brain with appreciation for sunsets, flowers and friendships—delicacies for our soul—produces the same good chemicals. I have come to believe that the diet of my thoughts can and must be selected very, very carefully.”

Nowadays, in the midst of mind-boggling hardships, there’s no need to look far for examples of gratitude all around us, coming from the most unexpected places. It’s easy to count your blessings when you survived the horror that was 2020 relatively unscathed—family intact, no major dent on your finances, no flooded home, no complaints except missing the parties you used to attend.

It behooves us to consider, then, those who had very little to begin with. Think of people who lost their daily-wage jobs and literally had nothing to eat, who live in shanties so small that the spreading of a virus, whether it was a common cold or the dreaded COVID-19, was a done deal. Think about children who had to stop schooling altogether, restaurant workers laid off because businesses closed down, or small entrepreneurs whose life’s work and savings disappeared with their dreams.

No reason to live

That’s why you can’t help but bristle a little when a rich woman whines about missing Paris or having no reason to live while sitting in an air-conditioned boudoir, declaring that her faith saved her, while blowing money on designer shoes that will not take her anywhere, even as her driver’s daughter in the province doesn’t own a gadget to see her through school. Yes, sh-t still happens, and sh-tty people have survived the pandemic. Maybe we should be grateful for them, too, but I’m not quite there yet.

There’s redemption on the other side of the spectrum, however. There was the motorcycle delivery guy who stopped to feed stray cats. There was the balut vendor who wouldn’t raise his prices during the pandemic because other people had to eat, he said. And there was my new idol, Lydia Torio, who watched as Typhoon “Ulysses” (international name: Vamco) swept her television, her kitchen, her home away while she held on to her five dogs.

Yet she later found it in her heart to give thanks, saying, “Ang importante, buhay din kayo” to her beloved fur babies with a big smile, a human ray of sunshine amid the mud and debris. Of course we could go to town with the circumstances and ineptitude that led to Lydia’s house being swept away—but the point was, she was still grateful. How big a heart must you have, indeed, to think that way?

“The root of joy is gratefulness,” says gratitude guru Bro. David Steindl-Rast. And indeed, as he also said, you don’t become grateful because you’re happy; you become happy because you’re grateful, and living in gratitude is probably the best antidote for survival in times like these. Having a “thank you” readily on the tip of your tongue leaves little space for whining, really; every little thing is something to be grateful for when we know that things could have turned out otherwise.

I started practicing being in constant gratitude mode after I was diagnosed with cancer almost eight years ago, and it made things much easier. There were huge things to be thankful for—friends who joined ranks, health insurance that covered a big chunk of expenses, strength that didn’t allow the disease and treatment to knock me down. I gave thanks for looking cute even without hair, for still being able to work and exercise.

As life went on, I gave thanks for finding a psychiatrist who was an invaluable guide through my posttreatment depression. I was glad to get back to driving again after a year, and praised the high heavens when traffic was light, when I found a parking space, when it didn’t rain until I was inside a building. I gave thanks when my tire blew only 200 meters from a gas station, or when a driver ahead of me in a hospital parking structure allowed me to take that slot first because my radiator had overheated, so I could get some water. When you’re grateful, every little thing carries a dollop of delight.

I still have my meltdowns and low periods, of course, but they don’t incapacitate me like they used to, because let’s face it: you can’t stay pissed when you’re sincerely saying “thank you.”

This exceptional year was no different. My mom died in February at age 95, but she didn’t suffer too long, passing away two months after we took her home from the hospital. We had her for one more Christmas, and we buried her 10 days before lockdown. I still feel like dropping to my knees in gratitude to God that she went peacefully when she did, because having a sick person at home, with nurses and 24-hour needs, during a pandemic, would have killed even me.

We were stuck indoors and I worked from home, which allowed me to ever so slowly fix Mama’s things and mourn her loss quietly. I had time to read some books, do Leslie Sansone walk-at-home classes, and become a BTS fan (the latter being a huge surprise, but I give thanks for them every day, too!). I saw my family every day, and every meal together was a heartwarming occasion.

I was certainly on the more blessed side of the spectrum, even as I experienced pay cuts and lost work, which broke my heart. Yet I still managed to whisper a feeble “Thank you, God” for savings and odd jobs. I then began teaching online English writing workshops, and I am grateful for the 18 batches of students I’ve had since July.

So the annus horribilis is coming to an end, and we’re in the final days of a year that tested us severely, and which, more than ever before, helped us discover what we are really made of and what mattered most. I don’t remember how many times I tried to do some frivolous online shopping, only to cancel my purchase and ask, “What the hell for?” The one time I did succumb (at 75 percent off!), I almost forgot about it, until the sneakers arrived, got disinfected, and went straight into the closet. (I’ve used them since then, but no, I did not need them at all.)

Some things have changed forever for many of us. I will never get to kiss my mother’s forehead again, or smell the baby shampoo that her yaya washed her hair with. It’s both amazing and paralyzing, when you realize what you will miss the most when you lose someone you love. For added cheer, I adopted a third dog, a Taal rescue named Frankie, one of my year’s biggest blessings.

Some things are not going to be the same for a long while. Yesterday we had our yoga studio’s Christmas party via Zoom, what has always been a fun affair with lots of Indian food, boisterous games, screaming and hugging. Not a few tears were shed for lost loved ones, trials during the year, or because we simply missed each other. I never thought I would want to hug so many people so much at one time, as everyone valiantly and sincerely shared what they were grateful for, as well.

I’ve appropriated one of the ever-wise Brother Steindl-Rast’s quotes as a mantra: “Every moment is a gift.” (I have “Everything is a gift” tattooed on my left inside forearm.) He continues, “Whatever life gives to you, you can respond with joy. Joy is the happiness that does not depend on what happens. It is the grateful response to the opportunity that life offers you at this moment.”

Maybe that’s the key to staying grateful: realizing that we’re blessed to have today, because today is all we’re really sure of. We’re not certain about the vaccine, the economy, the people in our lives, but we can be sure about where we are right now, and the God who put us here.

As the saying goes, that’s why it’s called the present—the best Christmas present we could ever get.