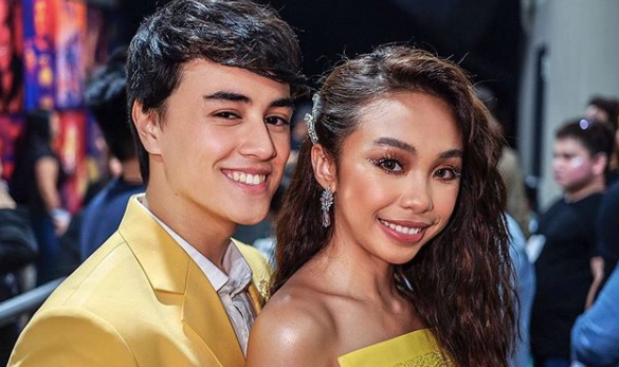 Friendship is all there is between Maymay Entrata and Edward Barber, and they maintain that they are content with that kind of relationship.

Asked if there is already romance brewing between them, during the online press conference for the love team’s latest movie “Princess DayaReese” last Saturday, Dec. 19, Barber answered in the negative.

“Again, whatever we have, we’re really happy. I think I’ve answered this question today three times already. The keyword that I always say is ‘content,'” he explained. “We’re contented with where we are, with the friendship that we have.”

“Si direk Barry (Gonzalez), he saw this through a lot. Hindi kami nag-uusap (We were not talking). Literally, we’re just sitting there,” the actor said. “We’re not just even talking but after two hours when we finally got to take, we’ll light up and we’d be able to work together. So, it’s not just a showbiz relationship.”

Barber knows that MayWard fans would always want them to be in a real relationship but he couldn’t be pressured to be in such a scenario.

“No, I will quit my job if I have to do that. But Maymay and I are the closest of friend,” he insisted. “Whatever the industry might want, whatever the fans might want, this is where we are and we’re content and happy with what we have.”

Barber feels Entrata knows him from the inside, though, especially when he’s not in his element.

“Ako, I say this, si Maymay all the time if she asks me if I am okay, I’ll say ’yeah.’ She’d be able to see if it’s real or not. Maymay is one of the people na talagang kahit itinatago ko ang feelings ko or anything that is going within of me, she smells it. Hindi ako makakatakas,” Barber shared.

(Me, I say this, with Maymay, all the time, if she asks me if I am OK, I’ll say ‘yeah.’ She’d be able to see if it’s real or not. Maymay is one of those people with whom I really cannot hide my feelings or whatever is going on within me, no matter how I try. She smells it. I can’t escape.)

“Princess DayaReese” tells the story of Reese (Entrata) who dreams of living like royalty. An opportunity arrives when she meets Princess Ulap (also played by Entrata), a runaway princess from Oro Kingdom who looks exactly like her. Switching places for 40 days in exchange for gold, Reese flies to Ulap’s kingdom where she meets Caleb (Barber), a young and determined reporter who is set to find out the truth about the kingdom.

“Princess DayaReese” streams worldwide beginning Jan. 1, 2021 on ktx.ph, iWant TFC, TFC IPTV, and pay-per-view via Cignal and SKY. Fans may already add to cart their tickets for P150 each. JB