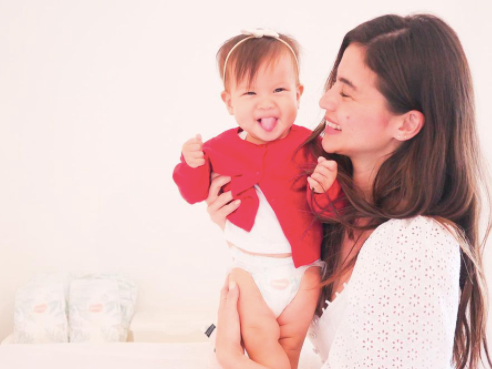 First time mom Anne Curtis’s priorities in life has changed now that she has given birth to her firstborn, Dahlia.

The actress and TV host spoke about these changes during her and Dahlia’s launch as endorsers of an international diaper brand, in a virtual event hosted by Patty Laurel-Filart last Sunday, Dec. 20. Curtis and her baby were in Australia during the interview.

“Alam mo (You know), it’s been the most amazing experience,” she declared when asked about how motherhood changed her. “The love that you feel is just overwhelming that’s why I’ve experienced this kind of happiness.”

In Curtis’s life now, everything revolves around her baby Dahlia.

“‘Yung when you open your phone, lahat ng pictures puro Dahlia na. Very rarely na lang na makakakita ka ng selfie,” she said. “‘Di ba before I have mga OOTDs, makeup look. But now when i open my phone, it’s all… pictures of Dahlia. As in napupuno na ang memory…”

(Like when you open your phone, all the pictures are already of Dahlia. Very rarely now will you see a selfie. Isn’t it that before, I used to have OOTDs and makeup looks? But now when I open my phone, it’s all pictures of Dahlia, as in my [phone] memory is filling up.”

Filart then shared that there were times when she would already miss her baby even when she just finished playing with him. To this, Curtis agreed.