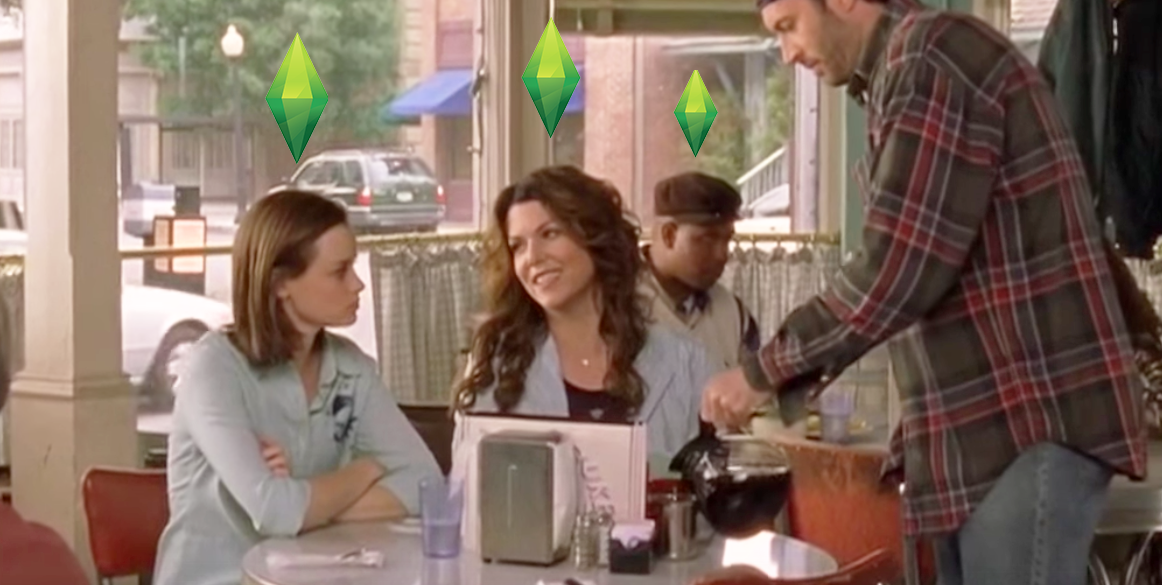 Is ‘Gilmore Girls’ secretly a simulation?

I had many brushes with “Gilmore Girls” as a kid. The first season aired in the US in 2000, I was 10, and they must have started to show it here on Studio 23, the local non-cable English-language channel (now defunct), shortly after.

I had a cousin who particularly liked it. Looking back, she would have been about the same age as Rory, 16. And I’m guessing she saw herself in Lorelai Junior: smart, quirky, awkward. The kind of student who laments an A-minus, twice in the stretch of two real-life episodes. Maybe this cousin read Flaubert during that tender age, too. Like Rory, she is altogether very nice and, indeed, very smart.

That is to say, I was aware of some of the stars of that distant constellation—the corner diner, the rich grandparents, the perpetually autumnal opening sequence—but never actually saw it in the real sense. I was 10! (If I’m getting the timeline right, the best show on TV would have been the Filipino-dubbed Hunter X Hunter on GMA. As it happens, it would remain to be one of the enduring wonders of the world until I’m 30, and even then the manga isn’t done yet. That’s another story.)

Another time I almost watched “Gilmore Girls” was in high school. My tastes have become decidedly more grown up. I’ve seen Kill Bill and Dancer in the Dark. There’s nothing I can’t not watch now.

The opportunity came during Holy Week, when we were staying with an aunt in her house in the south. As it happens, Holy Week is when a “Gilmore Girls” reruns marathon would be on TV. Your waking hours spent in Stars Hollow, as you remember Jesus dying on the cross. Anyway, they say balance is key in life.

As I sunk in my aunt’s couch and had the TV on Studio 23, my plan, in its infancy, was blithely aborted. Apparently my aunt particularly disliked “Gilmore Girls” for being “too talky.”

Although it would’ve been the perfect excuse, it had nothing to do with the solemnity Holy Week required. She seems to have been against it on an ideological level. Does she vote conservative? Where do you place “Gilmore Girls” on the political spectrum, anyway? I guess that’s another story, number two.

Now, because it’s right on top of Netflix, I get to finally watch “Gilmore Girls”. I started last weekend. Consider this a premature review.

A detour, for context: Often there comes a point while watching a show when I think to myself, Oh, I get it now. “The Queen’s Gambit”, for example, I’m convinced is anime. Forget that they are, in fact, real people. The round-by-round plot development, the performatively stoic chess geniuses, the bad teeth of one of them, the ghostly moving-pieces visions, the uphill battle to Final Boss stage—it’s as if a long-lost anime adaptation has come before, and now here’s the live-action version.

I felt a deja vu, too, when I saw the pilot episode of “Industry”. Then I realized that it reminded me of Misaeng: Incomplete Life, the South Korean drama about an intern in a competitive trading company. I have yet to continue watching “Industry”, so I don’t know if the impression will hold. But, yes, I basically thought it’s the Lena Dunham K-drama. Let’s watch overworked kiddos rise and fall in this dog-eat-dog world. Fun.

Not always, but it is with this habit that I watch shows, guessing the underlying framework (narrative, aesthetic, etc.) that holds it all together. And it’s even better when it’s the Freudian sort, the primitive Id that the show itself is unaware of.

This brings me to the question at hand: Is “Gilmore Girls” secretly a simulation?

There are many aspects of “Gilmore Girls” that are simply heartwarming and adorable in a pre-Elon Musk world. The idyllic small town being one of them. (If someone else hasn’t already invented a Stars Hollow tin of butter cookies, I’m doing it.) The archaicly Greek labyrinthine antiques shop, the small grocer with shiny produce straight out of North Korea… Surely someone here at some point swallowed the blue pill?

Watching “Gilmore Girls”, specifically in 2021, makes some of its quirks—its raison d’être in a pre-apocalyptic world—undeniably creepy. The obsessive natures of its characters and their repetitive behaviors—40 plus iterations of “magic risotto”, and coffee, coffee, coffee!—once easily and kindly understood as bucolic personality traits, conversely conjures up the image of wind-up toys with a limited set of programmed capabilities. I’d offer pertinent video game nomenclature if I were so able, but you get the idea.

Like any respectable conspiracy theorist, I make these pronouncements four episodes deep into season one. Rory is having a hard time keeping up with the impossible standards at Chilton. Lorelai is bone-deep worried that Rory isn’t telling mom about her first kiss. Sookie is running around town, effectively dodging extras tasked to cross the street and walk aimlessly, apologizing for cheating on her fruit supplier. Everyone’s having issues, and when I’m not in a suspicious mood, I feel for them entirely.

With my four-episode worth knowledge of Gilmore lore, I have a prediction about how “Gilmore Girls” will end. Of course, everyone gets their happy ending. Maybe, as an extra treat, Cinnamon the cat will be resurrected from the pet grave. The camera focuses on each person’s blissful visage, a communal scene with the perfect temperature of warmth, like a freshly baked cookie that is ready to eat, as the camera zooms out, showing Stars Hollow under a star lit sky.

Then the camera zooms out some more, and we find out that the “Gilmore Girls” universe takes place inside the prettiest little snow globe, but instead of cold snow, it’s pumpkin-tone autumn leaves, dancing in the breeze.

Just imagine such a thing! It would be so nice to look at, when you’re feeling lonely and so cold.