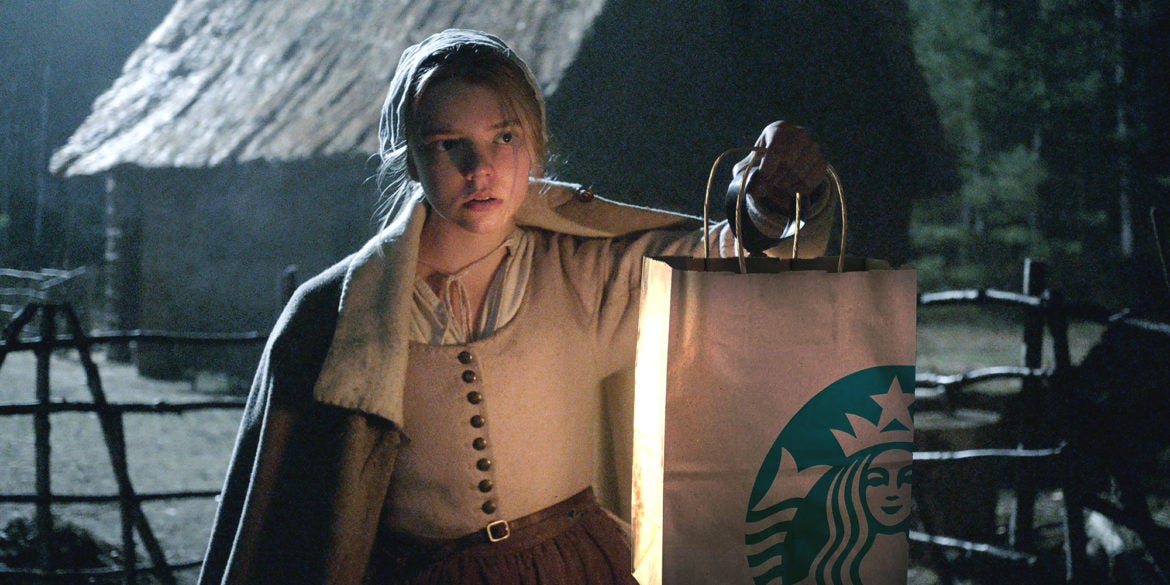 A friend of good manners and taste was nudging me to see The Lighthouse and I said, yeah, I really do plan to see it at some point. Moreover, I already know that I will like it. It has Robert Pattinson and Willem Dafoe and it’s black and white. What’s not to love?

But it’s one of those films that I’m still preparing myself to see. It’s not something you watch while polishing the silver. You have to be in the proper state of mind, if you know what I mean. That’s why every single movie I saw when I was 13 was phenomenal—maybe it’s the movies, but we know it’s the angst.

While I fabricate the requisite heartache-induced depression suitable to sit through The Lighthouse, I thought I’d go the lawful-good student route and see the complete Robert Eggers filmography chronologically. And because that’s just two films anyway, The Witch it is.

First-impressions-wise, The Witch has all the right stuff: pious period folk, cinematographic bleakness, and a Satanic goat on the poster, among other things. So I was expecting something complex that warrants the 90% Rotten Tomatoes rating. What I got was very pretty, but altogether quite basic.

That doesn’t mean it has no good bits. In fact, it has many. I’ll save those for later.

I suck at telling stories, so I’ll spare you the synopsis. (Open a new tab, be my guest.) Instead let’s go straight to the value judgment one will inevitably make relatively early on while watching the The Witch. That is, to make a premature guess about whether or not any of it is real.

And don’t worry, The Witch wasn’t so developed that it will make you debate the metaphysics of so-called reality. The Witch has none of the seductive, opaque fogginess of the Tarkovskian or the Lynchian. Its simple transparency makes The Witch unchallenging and approachable.

The coin toss: If the occult evil is real then there must be some pragmatic use for Christian salvation. If it’s not real, then everything from hereon is an arthouse playground for dreamy paranoia and fertile delusions. So which is it?

It would’ve been cool if it was the first. In confronting that challenge, the film would’ve unwittingly succumbed to becoming a sinister allegory of contemporary life, where the beliefs and convictions of different people are as complex as they are contradictory, as deeply-held as they are volatile. But that’s tricky to pull off. The second is easy. It’s just budget, brainstorming, and special effects.

The Witch serves a palatable premise about how its characters are poor victims of their own ardent faith. The dad is a Job figure; he seems decent enough but he’s just unlucky. Caleb is good at memorizing churchy chunks of text but he’s too innocent to be thinking about his baby brother burning in hell. As a parent, what you need in times like that isn’t food but a teaspoon of imagination—make something up! Poor kid. Thomasin is okay, she’s a stand-in for the level-headed audience. What the dad lacked in imagination, the twins got, times two. Or maybe they’ve seen The Crucible. Finally, the mom is really a non-character. But we need her for token hysteria. Also we need her breasts to feed to the crows.

When Black Philip acts up and things go irreconcilably downhill, it’s exactly like the garden party stab-a-thon in Parasite. It’s neither cathartic nor climactic, because everyone, in some ways, has been doomed for the start. Of course we’re meant to gasp at the horror of it all. But everyone is primarily a pawn to prove a point. Their sacrifice is inevitable.

The second, witch-ain’t-real framework is where The Witch thrives, at least aesthetically and in rhythm. Once the occult evil is relegated to the realm of puritanical fear, the film effectually relinquishes all responsibility to deal with it as clear and present danger. The film gets stuck in the fun-and-games juncture of the beat sheet, and thoroughly enjoys that pornish purgatory of bombshell witch, ecstatic demon possession, crazy goat, crazy mom, ASMR devil voice, and Goya painting.

Do not believe the bewitched soul that says The Witch is riddled with mysteries. Perhaps the only real mystery in The Witch is the blink-of-an-eye disappearance of baby Samuel. The film attempts to offer two possible answers: wolf or witch. Take your pick.