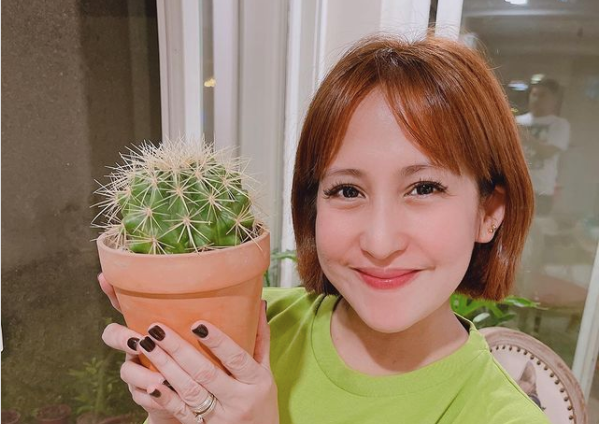 Jolina Magdangal reveals being scammed when she bought cactus online

Actress and TV host Jolina Magdangal still couldn’t shake off her disgust after being scammed recently for a cactus she purchased online, which prompted her to warn fans about such schemes.

Magdangal deemed it wise to speak up about her unfortunate experience and share how it happened, via her Instagram page yesterday, Jan. 16.

At first, she was commending a plant seller for its good transactions with her, posting a photo of a “Golden Barrel” cactus from the said seller.

(To @thepeapot, many many thanks for being generous to me. I am at peace when my plants come from you because I know it has been cared for before you sell or give it to someone.)

It was after commending the said seller that she recalled a bad experience with another seller who scammed her.

(Last Sunday, I was scammed by a cactus seller in FB Marketplace. In my desire to buy a Golden Barrel, [I came across] one seller who was selling it in a very low price. I bought from her [three Golden Barrels and seven other different kinds of cactus.)

Initially, the negotiation went smooth, she said. The mode of payment was through GCash. The last text Magdangal received was about the delivery of her order. She was messaging the seller until Monday but the seller would not take in calls to her GCash number.)

Magdangal’s husband, musician Mark Escueta, tried to help by messaging the seller in Facebook Marketplace. He attempted to place an order and the seller answered back. When he asked her about his wife’s order, the seller did not answer anymore. Soon, she can’t be searched anymore as well in the platform.

(Whoever you are, “Samantha” (that is her GCash name, I don’t know if that is her real name), take pity on those you robbed off of their hard-earned money. I know life is tough now but [what you did] is not the way to earn money.)

Magdangal is among some celebrities who are into planting and gardening, such as longtime partners Aubrey Miles and Troy Montero, and newscaster Gretchen Fullido. JB