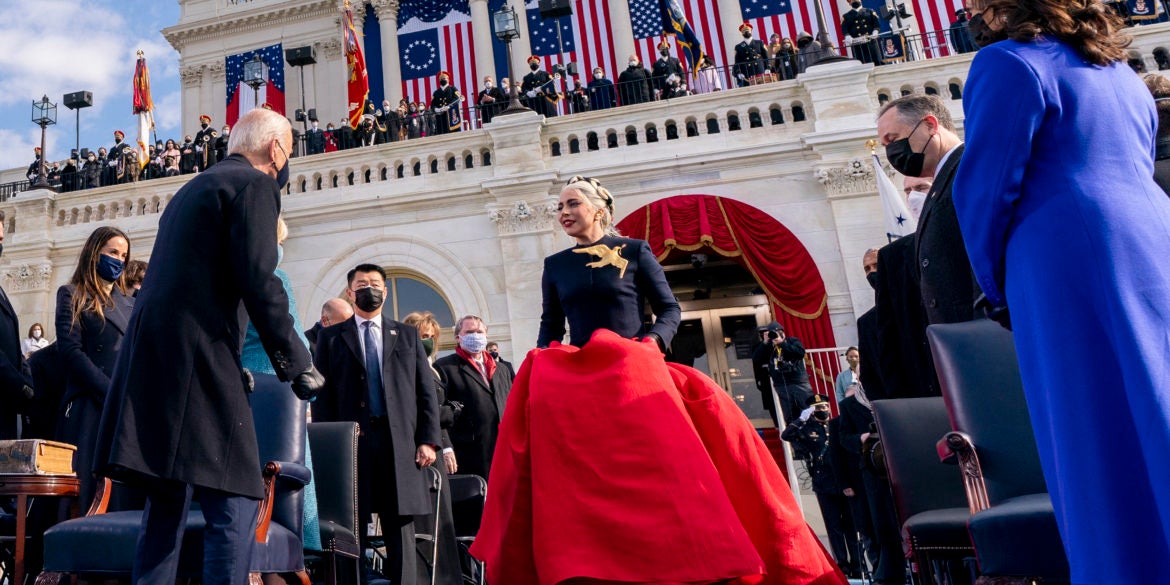 by Michael Mathes / with Maggy DONALDSON in New York

Joe Biden’s inauguration offered the American capital city a rare occasion for glamour, with Lady Gaga leading the way in a billowing ball gown and enormous dove brooch as she belted out a classic rendition of the US national anthem.

The long-sleeved gown featured a fitted navy drop-waist bodice with a demure mock neck collar, a look completed with a voluminous scarlet skirt that ensured she kept her Covid-friendly distance.

“My intention is to acknowledge our past, be healing for our present, and passionate for a future where we work together lovingly. I will sing to the hearts of all people who live on this land,” Gaga tweeted ahead of her performance.

Daniel Roseberry, the Schiaparelli designer behind the dress, said in a statement to The New York Times that “as an American living in Paris, this ensemble is a love letter to the country I miss so dearly and to a performer whose artistry I have so long admired.”

Following Gaga’s performance of “The Star-Spangled Banner,” Jennifer Lopez took the stage wearing Chanel, performing Woody Guthrie’s classic “This Land Is Your Land”, a tune with a socialist bent that the folk legend is said to have written in response to the more nationalistic “God Bless America.”

Bronx-raised with Puerto Rican roots, Lopez finished with “America The Beautiful,” adding in a line from the national Pledge of Allegiance in Spanish: “Con libertad y justicia para todos” (“With liberty and justice for all”).

Sporting a white pantsuit ensemble with a ruffle collar, Lopez also shouted “Let’s get loud!” during her performance, a nod to her turn-of-the-millennium signature hit, delighting social media.

And the youngest inaugural poet ever, Amanda Gorman, wore a sleek canary yellow coat, gold hoop earrings and a bright red headband to recite her moving work “The Hill We Climb.”

Prior to the swearing-in performances celebrating the 46th president, the Capitol was a parade of jewel tones as VIPs arrived in their winter finest for the inauguration.

President Biden and Emhoff both went classic in America’s legacy designer Ralph Lauren, with Biden in a lavender tie.

Biden’s wife Jill arrived in a look from the small house Markarian, whose young designer Alexandra O’Neill crafted an ocean blue tweed dress with a hint of shimmer and a matching coat that featured dark blue lapels, with a coordinating mask and gloves.

The New York designer has dressed a number of stars, including Laura Dern and Lizzo, despite establishing her fashion house just four years ago.

“It is an incredible honor to dress Dr. Biden today,” O’Neill said to AFP. “I am so humbled to be even a small part of American history.”

The 2020 CFDA American Emerging Designer of the Year, Rogers is a rising American star partial to color-drenched looks with artful tailoring.

Not everyone leaned into the glitz, however: one senator went viral by dressing as if the inauguration were but one stop on his long to-do list.

Bernie Sanders, the democratic socialist former presidential candidate and incoming Senate budget committee chairman, wore his meme-famous parka made by Burton, the snowboarding company based in the Vermont capital of Burlington.

He also charmed the internet with his practical oversized knit mittens, a gift from a Vermont teacher who said they are made from repurposed wool sweaters and lined with fleece manufactured from recycled plastic bottles.