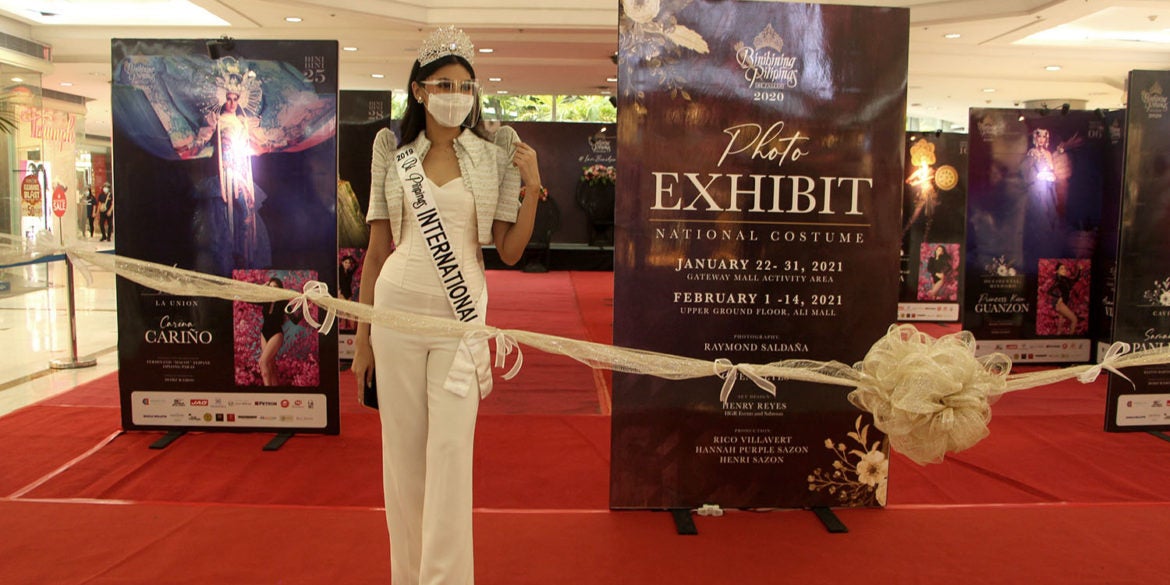 Reigning Bb. Pilipinas International Bea Patricia Magtanong is at the activity area of the Gateway Mall at the Araneta City in Quezon City where the national costume photo exhibit is mounted./CONTRIBUTED PHOTO

MAKATI CITY, Philippines—Months after announcing the indefinite postponement of its 2020 edition, the Binibining Pilipinas pageant is finally back on track, and marks its resumption with an exhibit of the aspirants’ photographs, and an announcement setting an April 17 coronation.

The 2020 Bb. Pilipinas pageant was supposed to stage its coronation ceremonies on April 26 last year and then moved to May 31 when the government imposed quarantine measures to abate the spread of Covid-19 in the country. But when the lockdown continued to prevail in most parts of the country weeks ahead of the supposed finals, the national beauty competition announced an indefinite postponement of the contest.

The country’s premier beauty pageant opened the year with a colorful resumption of its competition through a national costume photo exhibit featuring the candidates, an annual tradition that was also interrupted by the pandemic.

This year, the Bb. Pilipinas pageant also decided to mount the exhibit in two locations, instead of just one. It opened in its usual venue, the activity area of the Gateway Mall at the Araneta City in Quezon City, and will run until Jan. 31. From Feb. 1 to 14, the photographs will be on display at the upper ground floor of Ali Mall, also at the Araneta City.

Magtanong, who finished in the Top 8 of the 2019 Miss International pageant in Japan, also offered a walk-through of the exhibit in a virtual launch shown on the pageant’s official Facebook page on Jan. 22. She later hosted an online discussion with reigning Bb. Pilipinas Intercontinental Emma Mary Tiglao, together with other panelists, where they talked about each of the costumes that will be seen on the exhibit.

“I am happy to announce that [BPCI] is all set to continue with the pageant this year…see you all on April 17, 2021, for the [Bb. Pilipinas] Grand Coronation Night,” Araneta said in her statement.

She also shared that the competition will be “done in a ‘new normal’ and safe setting.”

Araneta also enjoined the pageant’s fans to its celebration of the country’s “colorful culture and our talented local designers” through the national costume photo exhibit.

After losing the Miss Universe franchise to a new team, and the Miss Supranational license to the Miss World Philippines Organization, four national titles remain with BPCI.

Bb. Pilipinas winner Gazini Ganados was invited to relinquish her crown in the separate Miss Universe Philippines pageant staged by another group in October while reigning Bb. Pilipinas Supranational Resham Saeed has yet to know if and when she will be able to turn over her title.

As of this writing, 39 delegates are vying for the four Bb. Pilipinas crowns at stake, including former Bb. Pilipinas runners-up Vickie Rushton and Samantha Bernardo.