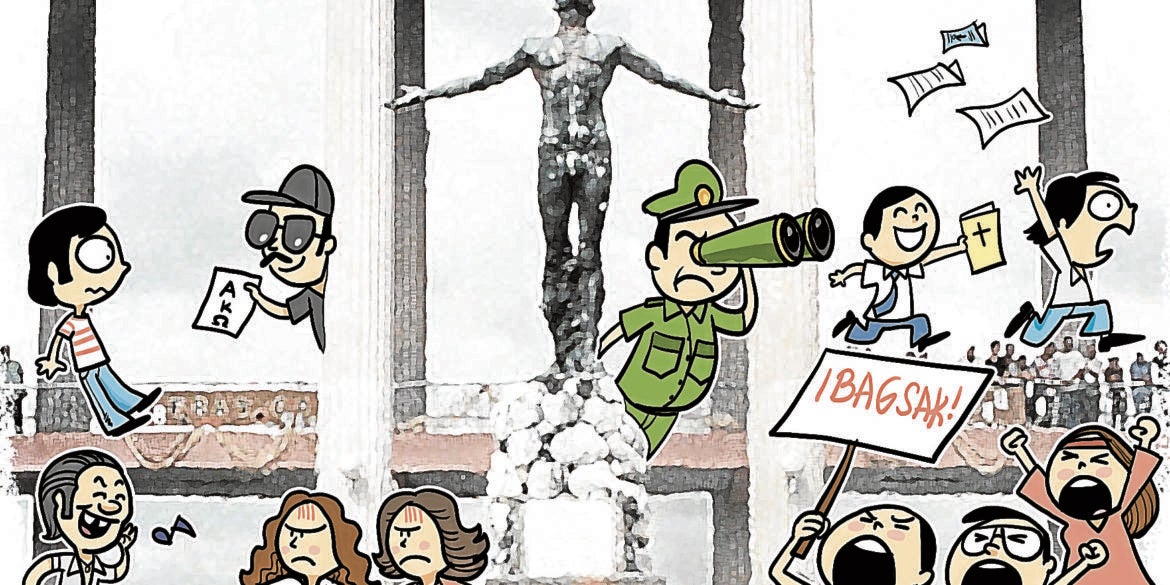 Sightings of the mythical ‘CPP/NPA recruiter’ were rare even then, so attempting to revive a page from an obsolete playbook only underscores the government’s failure of imagination

But recent netizen calls to #defendUP, in response to looming militarization, purportedly to “protect our youth against CPP/NPA (Communist Party of the Philippines-New People’s Army) recruitment activities,” brought back some fond memories of campus daze.

I belonged to the first freshman batch to enroll in the University of the Philippines (UP) Diliman after martial law was declared in 1972.

(I realize most of you reading this probably weren’t even born yet, but bear with me.)

Many of us came to the hallowed halls of the state university feeling that we had missed the party.

Upperclassmen regaled us with tales of their glory days at the barricades during the Diliman Commune (soon to celebrate its 50th anniversary), and vivid accounts of pitched street battles with the Metrocom and the Philippine Constabulary during the First Quarter Storm.

That was just part of the folklore that we imbibed along with whatever schooling we got.

In fact, there was no need to militarize the campus (though then as now, we did make a lot of noise about it) because the entire country was militarized. Marcos would eventually install one of his buddies as university president.

Sightings of the mythical “CPP/NPA recruiter” were exceedingly rare, if nonexistent, probably because Marcos was already doing much of the recruiting himself. Come to think of it, I don’t remember meeting any undercover military intelligence agents, either. They would have been too easy to spot.

Of course, some UP students did head for the hills, and some lost their lives in the struggle and were subsequently eulogized in Diliman. But they went of their own volition, after long and careful deliberation. I seriously doubt any of them were duped by some recruiter. That was just a fantasy dating back to the 1950s “red scare” days, the Hukbalahap and the ultraparanoid Committee on Un-Filipino Activities—old hat even in the 1970s. Attempting to revive a page from an obsolete playbook only underscores the government’s failure of imagination.Surprisingly, even during those dark days, the spirit of free inquiry was alive and well within the Diliman campus.

Every Friday, students could look forward to their copy of the Philippine Collegian, which at the time was said to be the only free press in the Philippines. Collegian editors risked being “invited” by the military for questioning, and quite a few ended up as political prisoners, but the newspaper stayed in print.

There would be the occasional classroom walkout or even a small “lightning rally” (what we now call a “flash mob”), over issues such as academic freedom or the regime’s human rights violations. (The more things change… the more they stay the same.)

Amazingly, all this done without social media or even cell phones.

We enjoyed a frisson of the forbidden when movies that had been banned in commercial theaters under martial law censorship were screened in a campus theater (I remember “Che!”—not the 2008 film with Benicio del Toro, but the 1969 one with Omar Sharif as Che and Jack Palance as Fidel).

From Danny Purple to Imee

UP’s attitude of liberalism and tolerance extended beyond the political realm.

Back then, the campus oddball was a guy named Danny Purple, so named because of his signature purple pants. He was an older guy with slicked-back hair who used to go around screaming obscenities at the co-eds.

In today’s politically correct climate, he would have been committed to a mental health facility for sure. But in the ’70s, he was just another amusing eccentricity of campus life. (The urban legend was that he had once been a student, fell hard for campus beauty Boots Anson, was rebuffed and consequently lost his marbles and became a UP fixture.)

In comparison, the current resident eccentric, the man known as “Zorro” (so named because he dresses as the titular swashbuckling hero) seems relatively benign.

As for recruiters, the evangelicals—in the form of Billy Graham’s Campus Crusade for Christ—seemed the most motivated to swell their ranks with converts. You could find them handing out pamphlets in the school corridors, and I learned quickly to give them a wide berth.

Occasionally, one of the smaller, lesser-known fraternities would hold a recruitment drive, but I was resolved to remain a “barbarian” (frat-boy speak for nonfraternity members).My weirdest UP encounter, however, was with now Sen. Imee Marcos.

One day, she walked into my Philippine History class wearing her Kabataang Barangay T-shirt, tailed by two burly presidential security group bodyguards. Her entrance was met with an awkward silence, especially since the professor was the renowned nationalist and avowedly leftist thinker Renato Constantino, just out of house arrest.

Constantino eyed her for a few seconds, then went on with his lecture.

This was UP, after all. INQ