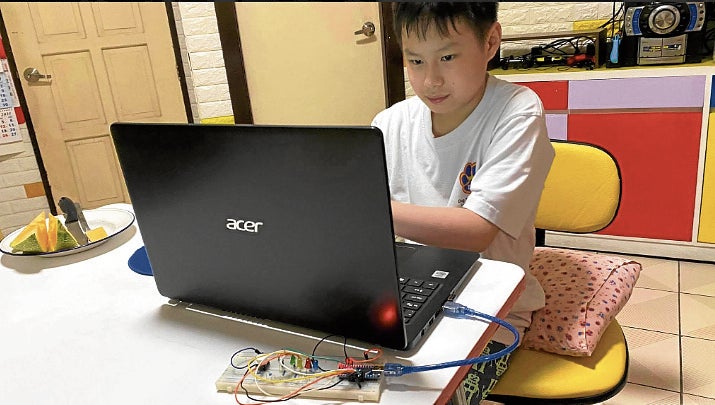 Teddy Tan’s parents home-school him while teaching him life skills.

With the online setup, it’s become difficult for many to approach learning with enthusiasm, given the many stressors in the pandemic we live in today. Many may find it too tiresome to pick up a new skill or hobby to practice, especially out of the digital classroom environment.

But such is not the case for father Wilson Tan and son Theodore “Teddy” Tan. Recently, the pair coded and built a UV sterilization box entirely from scratch—and that’s just one of their many projects this quarantine period.

Teddy was responsible for the box’s programming and coding while Wilson was in charge of the structural components. We talked to the father-and-son duo about the joys of learning and Wilson revealed his secrets on how he is able to teach his children anything, be it complex things such as coding, or everyday activities, in preparation for the real world.

As a parent, Wilson believes that firsthand involvement in his children’s learning process is key to ensuring that he can help them reach their full potential. “You can see their limits and then you see where they’re better suited,” he said.

This kind of involvement gives him a better grasp of the material to be learned, and what he can do to supplement additional support in learning. Not only does he understand what needs to be done, but he is also able to pick up a thing or two himself.

He explained that this was one of the reasons he and his wife opted to home-school their children, saying that it was more efficient once they understood the learning styles of their kids. It also gives them more freedom to think independently, since they work at their own pace.

Wilson mentioned that one of the things he ensures in his teachings is that they have real-life applications. He believes that the traditional formal education can be a little stifling, “a one-size-fits-all” kind of experience. He finds it more practical and valuable to be teaching them life skills.

“I’ve learned gardening, cooking, even washing the dishes. It’s good to know it, but it doesn’t matter if you don’t use it,” said Teddy. As for coding, dad Wilson believes that it would be extremely helpful if everybody learned how to do it, especially with the constant technological advancements of today’s society.

For Wilson, the most important element in learning is to always have fun above all else. “If they don’t enjoy it, there’s no use for it. If they’re not having fun, what’s the point,” he said.

He firmly believes that the joy these new interests bring is vital because it is what gives his children the drive to keep learning.

Wilson said that he’d pay attention to what his children were into and push them a little more in that direction while making sure that they were learning to their fullest potential.

He believes that it is important to be progressive and open-minded when it comes to learning.

Teddy agrees. “It’s more important to get to accomplish your end goals.” —CONTRIBUTED

The author is an AB Sociology freshman at the Ateneo de Manila University.