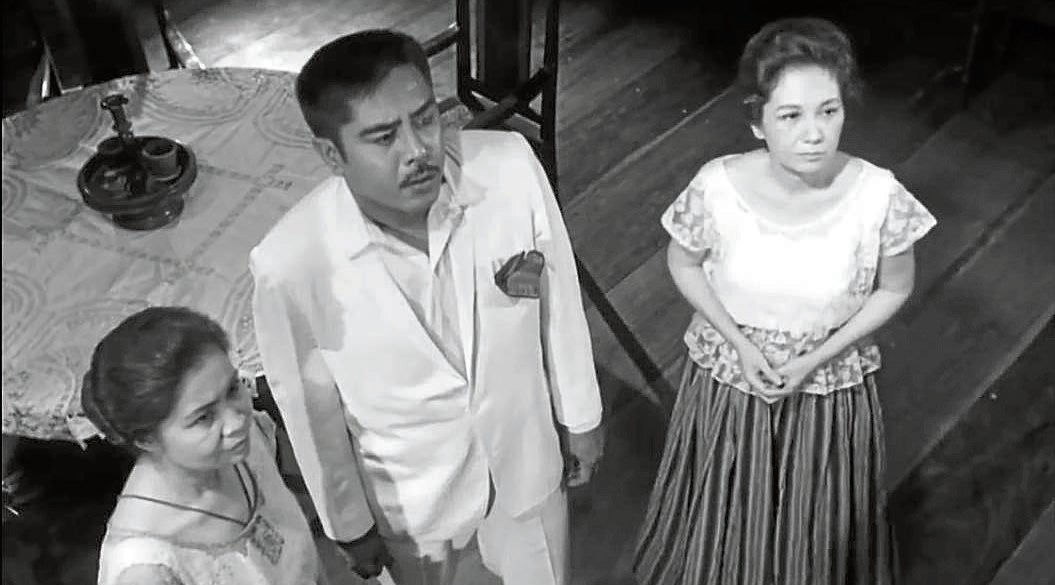 Naty Crame Rogers (left), Vic Silayan and Daisy H. Avellana in a scene from 1965’s “A Portrait of the Artist as Filipino”

The legendary actress-director, who died Feb. 1 at 98, lived by her credo: ‘Every time we fully realize ourselves in drama and the theater, we feel our immortality’

It was drama critic Gibbs Cadiz, now Opinion editor of the Inquirer, who eight years ago asked me to interview legendary actress-director Naty Crame Rogers as her family and friends were preparing to celebrate her 90th birthday. And what a rewarding experience it turned out to be.

The interview took place in her residence in Barangay Kapitolyo, Pasig City, which was like a living museum where plays directed by Rogers (or Tita Naty, as everyone called her) were presented.

She turned out to be an ideal interviewee. You just had to shoot one question to her and out would come a flood of memories and reminiscences. And digressions. So sometimes you had to gently bring her around to the issue at hand and to the clarifications you needed. Her mind was still sharp and, like a good actor, she could talk a kilometer a minute.

The friendship continued and as I learned more about her eventful life, I asked if I could write her life story. She agreed! Unfortunately her stately home burned down, but she was able to save most of her beautiful religious images, vintage photos, memorabilia, posters, décor and antiques. And she moved to a more modest residence in the subdivision.

The interviews continued, and I managed to complete a book-length manuscript titled “Naty Crame Rogers: A Life in Theater.” With all confidence I sent it to Anvil Publishing, which had published four of my travel books under Karina Bolasco. Came the blow. Anvil kept me waiting for months and then unceremoniously rejected the biography. (Bolasco was then on the point of retiring and had no say in the matter.)

The next step was to send the manuscript to the University of Santo Tomas Publishing House, whose director was a kind of prótegé of Tita Naty. The reaction this time was, if I could revise and add to the material. Perfectly justifiable, I was sure. So at first I said yes but then decided, no dice. It’s a psychological defect on my part. Once I am through with a book project and it has been approved by the client, I don’t want to go back anymore to the manuscript, especially when confronted by another project.

As Dr. Floriño Francisco, son of National Artist Lazaro Francisco, observed to me once, “even great and famous writers agree to having their works revised and improved.”

At this point Cathy Rodrigo, the hands-on niece of Naty who was her guardian during her final years, intervened. She had the manuscript printed in a limited edition for family and friends; and she and her husband became the publishers. The book was finally published and launched in November 2016.

Natividad (forever known as Naty) Crame was born and raised in Manila, eldest of five daughters of Ramon Crame (nephew of Gen. Rafael Crame after whom Camp Crame was named), a “so handsome” Ilonggo, and Espectation Kabeza, a schoolteacher from Kawit, Cavite.

Because of the revolution, the mother’s family was anticlerical and inclined toward the Aglipayans. On the other hand, the father, a debonair man about town who played the violin and piano, was a “rebellious Catholic.”

Torn between conflicting Christian religions, Naty eventually embraced Roman Catholicism as the one true Church, perhaps because of its majesty and mysticism. Her faith deepened at St. Scholastica’s College Manila, an experience which stayed with her all her life. In fact, she and husband Lt. Col. Joe M. Rogers, a survivor of the Bataan Death March, celebrated their golden wedding anniversary at St. Scholastica in 1997.

In 1939, the 17-year-old enrolled at the University of the Philippines (UP), then in Padre Faura, Ermita, Manila. “At UP even then,” she recalled, “there was this feeling that if you were there you were very bright. [Yet] I found my work in UP very easy compared to what I had to go through in St. Scholastica (then under the German nuns).”

The roles she later made famous were that of Leonor Rivera, Rizal’s sweetheart, in the plays of Severino Montano, and of Paula, who gives in to the advances of the seducer Tony Javier in Nick Joaquin’s “A Portrait of the Artist as Filipino.” And among the highlights of her career was interacting with four National Artists: Montano, Lamberto and Daisy Avellana, and Rolando Tinio.

Naty was thoroughly a theater actress (and later director), and her only film role was in Avellana’s “A Portrait…” This was shot in 1965 in an ancestral home in Biñan, Laguna, with only one camera and a few reels of film. The house was haunted. A mysterious man appeared before director Avellana one day demanding to see the owners. When told they were not around, he left in a huff. When Avellana reported the incident to the new owner, she only laughed, “Oh that was my father (who was long dead).”

Naty exclaimed, “We were all experiencing some kind of phenomena.” At one time her shawl disappeared and she prayed to the spirits to please return it. When she turned around, she saw the shawl draped over a chair. What was funny was that one of the ghosts (a female or a gay one, I don’t know which) had fallen in love with the handsome actor Conrad Parhan (who played the seducer) and would fix his things at night. So that when he woke up in the morning he found the room well arranged. And the ghost, after the shooting, even followed Parhan home!

Naty also enjoyed her stint with Tinio’s Teatro Pilipino at the Cultural Center of the Philippines. “It was always a joy because you looked forward to the costuming by Rolando,” she raved. “It was also a challenge because Rolando never hired Avon or any of those makeup people. You had to make yourself up, and the women were careful not to reveal their makeup secrets.”

One of the actors was Ding Navasero, who was very quiet but loved to play tricks on people. At one time a new actress was cast in a lead role, and she was apparently becoming a prima donna. Annoyed, Navasero talked to the lightning man and during the curtain call, when the actress was about to triumphantly take a bow, the lights suddenly went off!

“Only Navasero had the nerve to do that,” chortled Naty.

Tita Naty underwent the school of hard knocks in the theater with Montano and his Arena Theater, which broke new ground in the 1950s along with the Avellanas’ Barangay Theater Guild. Montano was one of the authoritarian directors of the late 20th century. He would shout and make a scene. “When we started in 1953 the teachers were used to this kind of behavior,” she recalled. “You know, you have to be arrogant if you’re top dog.”

Naty, however, was not one to be cowed. When she felt she was in the right she would stand up to the director. Some people, especially the young ones, thought they were a couple. Not true at all; Montano was gay, although married. As he himself put it once, his lead actress had “the heart of a man, the face of a woman” while he, the director and stage manager, “had the heart of a woman while physically a man.”

“I was his stage wife, if there is such a thing,” she quipped.

The last time I saw Tita Naty was on Dec. 23, 2019, when niece Cathy organized a party for her to celebrate her 97th birthday. Obviously weakened, she didn’t say much but gave everybody a half-smile and followed the program with interest; and last Monday, Feb. 1, she went gently into the night, to the light.

Her credo was central to her life, to her persona. I would like to think that she wanted to be remembered by her own words: “We are children of the light—you and I. Every time we fully realize ourselves in drama and the theater, we feel our immortality. This is our mission. Together.”