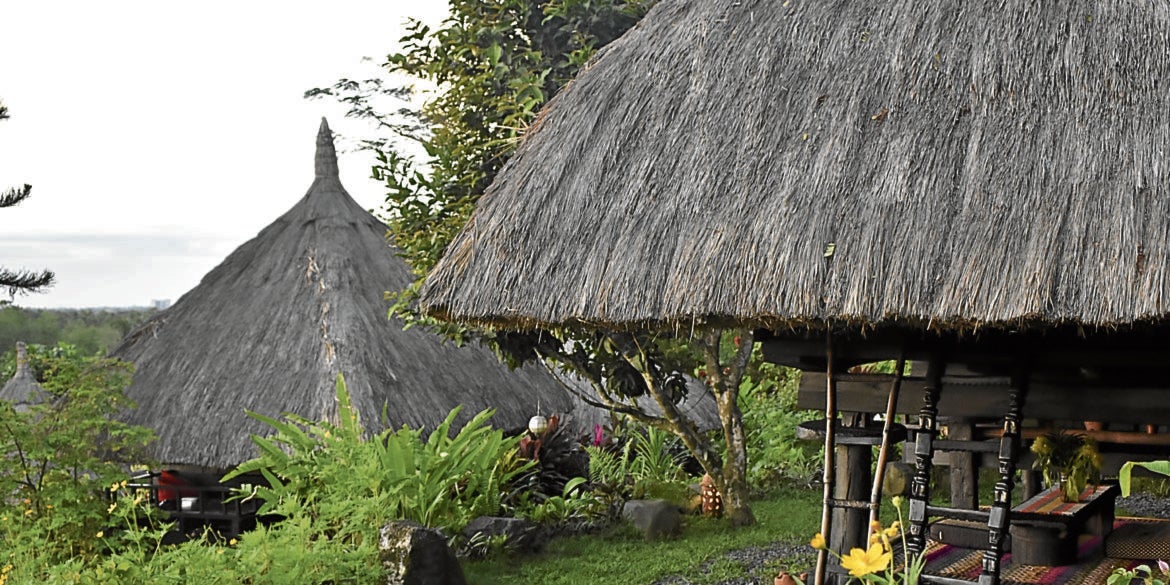 On a hill in Silang, Ifugao recreated

Shambala for the Tibetans is a mythical kingdom where only the pure of heart can live, a place where love and wisdom reigns, and where people are immune to sufferings, want or old age. An unattainable heaven for souls like me!

But in Sanskrit, Shambala refers to a place of tranquility. Well, the Hindu meaning is good enough for me.

A modern Shambala, in fact, is near enough for a family weekend even in these COVID times. And that was what we did recently, with my daughter Banaue driving, grandson Raja and me looking at the view behind our face shields and masks, and husband Mario taking pictures along the way. To Tagaytay Ridge and curving back down to Silang, Cavite.

No, we did not really need to go way up to Tagaytay. It was only my third time to go out nine months into the lockdown, Mario’s first, Raja’s second. Banaue has been doing all errands around the city since the pandemic, and only once did she drive me and her son on a pleasure trip to the nearby San Mateo hilltop with a view of the metropolis.

Now, we could venture a bit farther, to Shambala Silang.

The owner says it is a work in progress, especially following the devastating Taal Volcano eruption nearby. An enticing enough come-on.

Riza Matibag Muyot, CEO of a finance company, and her lawyer husband Albert were looking for a weekend retreat after living long enough in the city. She felt her children were missing out on the summers of her childhood spent in the ancestral home and farm at the foot of Mt. Banahaw in Dolores, Quezon. There, she and her siblings played bahay-bahayan under a mango tree, climbed guava trees and swam in the river.

“A friend, who owned a property in Silang, brought me to her place. I immediately fell in love with its rolling hills, forest and a spring,” says Riza.

They found a property close to hers and bought it in 1999. She only got to develop it in 2008 upon her father’s death and her mother’s transfer to Canada. She visited the place and planted some trees. The visits became frequent and longer. She started developing the place and called it Shambala.

“Shambala,” declares Riza, “allowed me to express my grief at the loss of my father. It made me creatively and productively respond to the major changes in my life.” she adds.

Looking at the contour of the hill, she imagined sculpting it. With the help of artisans, some of whom came from the Cordilleras, she terraced its slopes and built Ifugao huts that she sprinkled around the area. And her collection of indigenous arts and crafts for the past 20 years has found a home in Shambala, blending nature, culture and art together.

She sees in indigenous art a union of functionality, aesthetics and spirituality. She says, “Everything is interconnected. A bulol, for instance, is not just a piece of wooden sculpture but an ancestral spirit that guides and protects the house and the community.”

“When I visited Shambala I was amazed at the private collection of Riza,” says Tess Rayos del Sol, ManilArt 2020 Art Fair director. “She has distressed bulol poles that hold the house, the hagabi with coat of arms, authentic baskets and Ifugao huts she got from Ifugao.”

Hagabi is an Ifugao ceremonial bench carved out of a single tree trunk and a symbol of wealth and prestige.

Riza’s collection of indigenous art, coupled with the sculptures of top-notch artists Kublai Millan, Danny Rayos del Sol and Richard Buxani, exhibited at Tawid Art Gallery of Shambala, was the first-ever off-site exhibition of ManilArt 2020, which ran until end of January. Viewing the Shambala collection, according to Rayos del Sol, was like going to faraway Sagada and experiencing it up close.

Riza has prepared a list of coming exhibits at Shambala. Coinciding with Holy Week will be one of religious art by Aris and Dale Bagtas for the whole month of April. Wood wizard Agi Pagkatipunan will showcase his functional art in August. Shows by Millan, Danny Rayos del Sol, Carlito Ortega, Buxani, Willie Garcia and Jingoy Salcedo are being scheduled.

For Shambala’s anniversary later in the year, a monthlong arts festival showcasing various local art forms, together with the Muyots’ private art collection, will be held.

Riza’s place of peace and tranquility in Silang has given her inspiration to write her reflections and poetry. “Shambala gave me strength to rise from the ashes, literally and figuratively, and live again.” It has become for her a passion project combining the old with the new, shaping it into a lush tropical garden and a haven where art and nature meet, a proof to the age-old belief that with hard work and imagination, everything is possible.

The pandemic has made Riza open and share her Shambala with people wanting to escape even for a day COVID-imposed confinement and be surrounded by nature, relax, have a quiet conversation over Silang coffee or tea, and even dine on Riza’s specialty: heritage culinary delights from Cavite, Batangas and Quezon. Visitors can also opt to stay overnight in their Ifugao huts.

More than a place, says Riza, “Shambala Silang is an experience, a fulfillment of a dream and an answered prayer.”

She hopes, “As we welcome people to Shambala Silang, I would love it to be part of people’s own personal journey, as it is part of mine.” —CONTRIBUTED