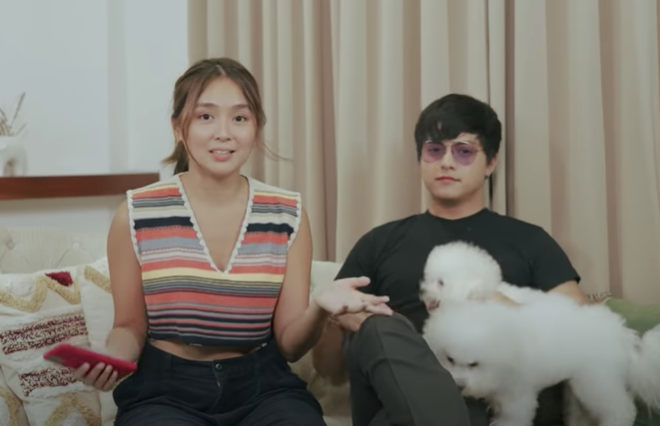 Although they have been a couple for a long time now, Daniel Padilla still has a few little things that can make him jealous over his girlfriend Kathryn Bernardo.

In the actress’ latest YouTube vlog, in the episode “Questions I’ve Never Asked My Boyfriend” on Valentine’s Day, Padilla answered all questions thrown at him by her, including about topics such as jealousy.

(Maybe for example, we’re in a party, when you don’t go back to me. It’s not jealousy. Maybe I am just irritated, but the definition of that may be jealousy.)

Padilla admits he is an attention-seeker as a boyfriend and he has to be attended to from time to time, especially during events or parties where they are together.

(Of course, I want your attention, then you don’t give it to me. You might want to check on me.)

Bernardo recalled attending a New Year’s party for Magic Ball where Padilla was with his group and she was with her celebrity friends.

(Yes but it doesn’t mean that all night, we will stay with those groups. You need to check on me, like how I go to check on you.)

Aside from jealousies, they also talked about sweet moments. When asked about what one memory with her he would keep in case he loses all other memories, Padilla said it would be of their holiday trip in Amanpulo.

“Gusto ko ‘pag tayong dalawa lang kasi inaalagaan mo ako,” Padilla said. (What I want is that you take care of me when there’s just the two of us.)

Padilla also mentioned their first Paris trip as very memorable, when they were on their way back home from Iceland. He recalled that they just ate there, and that there was a singer who belted out an operatic song before them.

“Six hour lang pero the best ‘yun,” he said. (It was just six hours but that’s the best.)

Padilla and Bernardo have been a couple for eight years now. They have starred in numerous TV series and films, including their latest hit digital series “The House Arrest of Us.” JB