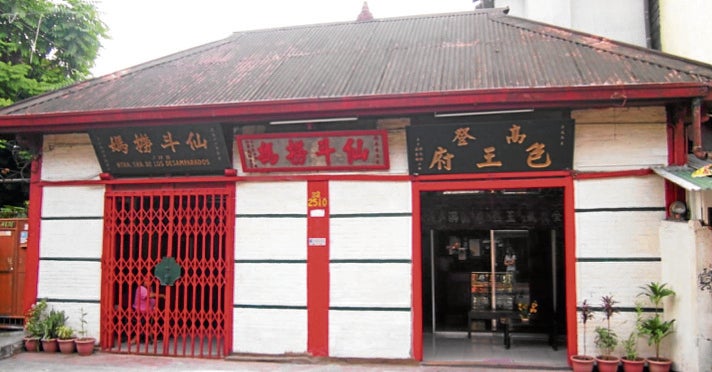 Pressure mounts to save unique Taoist temple in Manila

In early January, the National Commission for Culture and the Arts (NCCA) received a letter-petition to lift the Important Cultural Property (ICP) status of the Pao Ong Hu Taoist Temple located behind Nuestra Señora de los Desamparados in Sta. Ana, Manila, on grounds that its declaration in 2016 was done without due process as there was no public hearing undertaken prior to its ICP designation.

In addition, the letter sent by a certain Chloe Go indicated that the building, which traces its roots back to the 19th century, was turned over by the previous owner to her bare and without any artifacts in addition to both of them not knowing the structure’s ICP status, plus the Registry of Deeds was not informed of the declaration done by the National Museum.

The filing of the petition to delist the temple as an ICP is a legal move as stated in Section 11 of the Implementing Rules and Regulations of Republic Act No. 10066, better known as the Heritage Law, which notes, “a declaration or a lifting of a cultural property as National Cultural Treasure or Important Cultural Property shall commence upon the filing of a verified petition by the owner, stakeholder or any interested person with the Commission (NCCA), which shall issue temporary remedies, if necessary, to protect a site prior to declaration, after which it shall refer the matter to the appropriate cultural agency.”

The appropriate cultural agency which has jurisdiction on the building is the NCCA as stated in its Jan. 8 notice to the public.

Following the posting of the said notice, heritage advocates and organizations were quick to oppose the lifting of the building’s importance as this, sources say, may lead to demolition.

The Intramuros-based Kaisa para sa Kaunlaran with its heritage arm Kaisa Heritage Center, a sociocultural organization based in Intramuros, Manila, championing Tsinoy history, culture and heritage had expressed its opposition to the delisting of the building it described as one of the oldest Taoist temples in Manila.

In a letter addressed to NCCA Chair Arsenio Lizaso, Kaisa’s current president Michael Guzman, represented by founding president and historian Teresita Ang See, said the structure has to be preserved even if it is not the original edifice since the site has always been a place of worship by both Tsinoys and Filipinos.

Guzman said “the temple not only honors the Taoist god, Pao Ong Hu, but also has a shrine dedicated to Our Lady of the Abandoned, also worshipped as Sta. Ana Lao Ma, or the Taoist goddess Ma-Zu (Macho in Hokkien) and as the Buddhist goddess of mercy (Kuanyin), so much so in that it is considered one of the Kuanyin Mary that is unique in the Philippines.”

He said that the building is a monument to religious syncretism as it is the only one blending the Catholic, Taoist and Buddhist beliefs.

In the same letter, Guzman said the building is a symbol of Sta. Ana’s connection with the Chinese as evidenced by important archaeological discoveries unearthed in the area in the 1960s which date back to precolonial times.

Due to this evidence, he said, “Sta. Ana district has played an indelible and significant role in this trade that tied not only our islands together but also tied us to China, the East and through China to the rest of the world.”

Kaisa also countered the claim that the old and new owners had no idea of the temple’s declaration saying ignorance of the law excuses no one.

Guzman however said that her group is open in assisting the current owner in coming up with a win-win solution that will benefit all of the stakeholders.

He said the building can be adaptively reused for a number of purposes such as a training or visitor center and it can even symbolize the whole district of Sta. Ana.

“The architecture of the temple is worth preserving as it is possibly one of the oldest surviving Chinese-style architectures in the country,” he said.

“The structure, if preserved, can bring attention and resurrect the old and only existing in situ archaeological excavation that was beneath Sta. Ana Church before the Franciscans closed it down,” he added.

Another group, Manila Heritage Tours Sta. Ana (MHTSA) also opposes the delisting of the building and its possible demolition.

In an interview with Lifestyle, Boyet Magale of MHTSA said the temple is very important as it symbolizes the dialogue of various faiths.

He said the temple is located inside the declared Sta. Ana Histo-cultural Overlay Zone which makes it more significant and its preservation tantamount.

Magale said its demolition means another loss to what he described as Manila’s underrated tourism spot.

If it is torn down, he said, “we will miss something forever.”

“I hope we get the appropriate action on it—not to delist it but preserve it both as a tangible heritage as well as its intangible aspects,” she said.

Often overlooked as heritage sites, Chinese temples abound all over the country, particularly in Manila.

In an interview with Lifestyle, See said that many extant temples are at least 100 years old but most are about 50 to 70 years old, making them heritage structures, too.

The heritage law states that structures of at least 50 years of age are presumed important cultural properties and must also be protected.

See said that many temples were built in the 1950s to 1960s and “only a few ones have been built in the last decade or so.”

“The liberal policy and religious tolerance of the American regime allowed Chinese faith and folk belief to flourish,” she said.

“Also at that time, Chinese families were reunited with females (rare during the Spanish period) starting to arrive,” she explained.

“More females started coming in the 1920s and so they brought with them a more active observance of their folk traditions, rituals and faith,” she added. —CONTRIBUTED