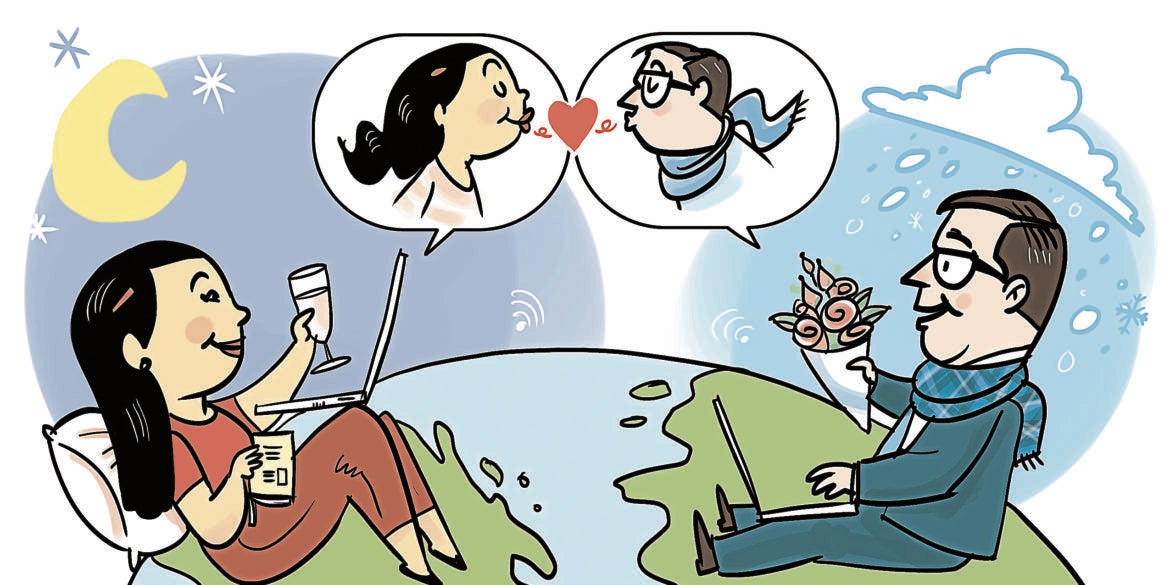 We have spent more time apart than together, and we wanted to change that—then the pandemic hit us

“I don’t believe in Valentine’s Day,” Martin said, rather dismissively, a week before Feb. 14.

“But you sent me flowers last year!” I said. Well, I also don’t believe in long-distance relationships (LDRs), yet here we are on a requisite video call.

We met in Gothenburg, Sweden, almost four years ago during my monthlong Scandinavian sojourn, a cold and expensive but super worth it trip, since who knows when we can travel for fun again?

Before Martin Karlsson and I became long-distance lovers, we were long-distance friends. I was pining over a Swedish DJ I met in Stockholm, and I would talk to Martin during the wee hours, since my sadness required an audience while my Filipino friends were asleep. He was my “night shift” sounding board, and we kept in touch since. Martin came to Manila in 2019 and we made our relationship official.

Ours is a slow-cooked, acquired-taste kind of romance.

A heartbroken friend once asked me the secret to finding love, and for me it’s two words: Tinder Gold.

There was a gnawing anxiety to being single in my mid-30s, laughing at memes, while my former classmates are already on their second marriages and sending their kids to high school. I didn’t really vibe with my domestic dates, so I outsourced.

Being a Southeast Asian girl on a holiday in Northern Europe meant being consistently “random checked” by airport security and swabbed for explosives, but my Tinder matches made up for that hassle. Being “exotic” was a plus, and I admit I got lucky. There are a lot of jerks and scammers on dating apps, just like in real life.

Perhaps Martin’s pragmatic view of a day dedicated to love is grounded in our cultural and personal differences. He’s a straightforward lawyer and an introvert geek. I have been in media, which involves events and interactions. While my 20s had been a big hangover, Martin collected “models,” which are actually Medieval Warhammer figures, not lingerie angels.

We have spent more time apart than together, and we wanted to change that—but then the pandemic hit us. Communication is literally all we have.

Waiting out the lockdown alone in my apartment was scary, and my routine calls with Martin kept me afloat. We somehow have the same work schedule despite the time difference, and he would patiently listen to my woes, saving me from making a mess on socials.

Nothing is too sad, kinky or silly.  He is my safe space (“Do you still call them Swedish meatballs or just meatballs?” “When you give me a foot rub, does that count as a Swedish massage?”), and I am his (“Why is there Christmas decor before Halloween?” “There’s rice and spaghetti in fast food?”). By now, he has learned a few Filipino words such as merienda and chika.

He is more supportive than my best sports bra, but he does not coddle. Being with a practical lover means approaching things directly, almost in a businesslike manner. If we want something changed or done, we tell it as it is. We negotiate. There are no hints or silent treatment and you can’t be pabebe.

That might be the reason Martin and I hardly argue. He only gets upset with my tardiness and the final seasons of “Game of Thrones.”

But there are stuff that annoy me, like when he asked why I needed a visa, or when I realized that he pays less for utilities. He also told me that Swedish health care applies as well to immigrants, covers mental issues and maternity, and sets no cap on sick days. Their government provides a stipend to students and the jobless till they find work. Swedish parental leave is a generous 480 days per child, and it doesn’t matter if the kid is adopted.

Empathy and art are taught in school—which is free all the way to university. I call his way of life “perpetual perks.” Maybe these privileges are also why being a Swedish resident is not as easy as marrying someone who is a citizen—in fact, it doesn’t matter if couples are married as long as stringent requirements are met.

Despite my awful internet, Martin and I manage to go on virtual dates. On my recent birthday, I told him I found it odd that some greetings pinned the “happy” on being with a partner. It’s nice to be with someone, of course, but I am always for self-sustainability and celebrating the joy and survival of a person as an independent individual. Our partnership works because we respect each other’s moods and quirks. Love, I have learned, doesn’t have to be stressful.

Sweden never locked down; meanwhile, I am still quarantined in the Philippines, spending another Valentine’s Day away from Martin. So I asked him, if he doesn’t believe in Valentine’s, why did he send me surprise roses the last time?

“Because I believe in you!,” he said. “And you like Valentine’s. Do you have any Valentine wishes?”

“I just want us to be together,” I said. “And maybe an Apple Watch, or an air fryer.”