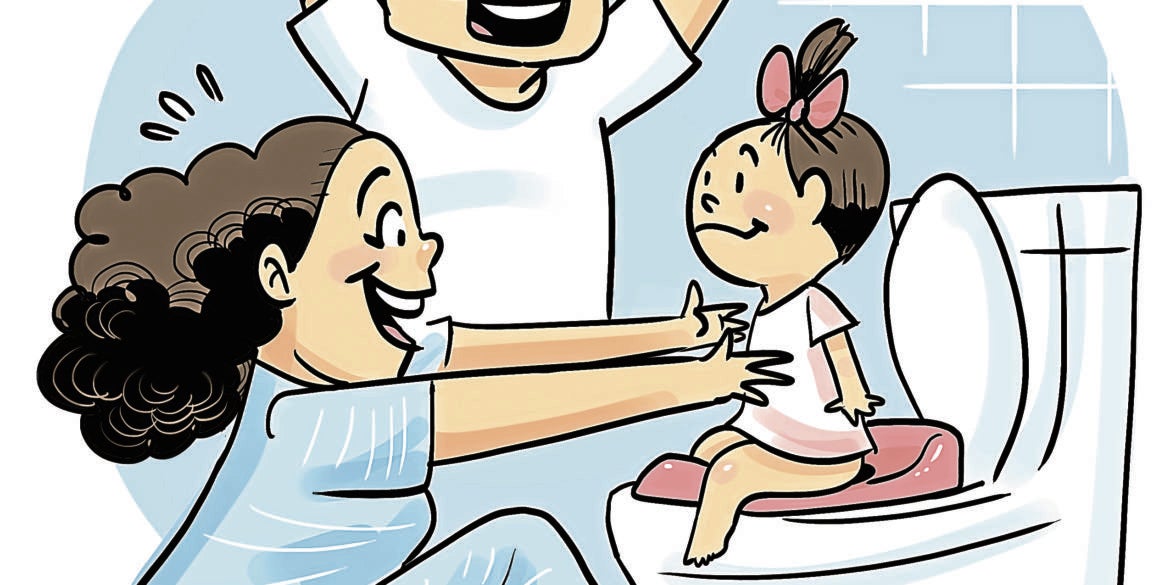 Because I was squeamish, I trained my daughter to sit on the toilet at five months. It was easier than I imagined

I hate dealing with my daughter’s poop. This is why I had her potty-trained for number two at 6 months.

Our society dictates that it’s the woman’s job to change diapers. This is reflected in the lack of changing tables in men’s restrooms and family rooms in public establishments. This was our frustration whenever we had to go out with our baby. Diaper-changing was automatically Mommy’s duty.

I’ve done it countless times, though my husband agreed to be in charge of the diaper changing, to help ease me of the burden of breastfeeding.

As a cloth diapering family, we also strictly follow the flushing of body wastes into the toilet instead of the trashcan. Thus, it was inescapable to deal with poop.

Because I was squeamish, I trained my daughter to sit on the toilet at five months. It was easier than I imagined. Even babies’ bodies follow a routine. The first thing we noticed was that she could sleep all through the night at 4-5 months. She would wake at 6 a.m. and poop five minutes or so after waking up.

When she did this for two weeks straight, we decided to use the potty trainer that could be placed atop an adult toilet. I would wait for her to wake up, remove her diapers and make her sit on the toilet. I would sit on the floor holding her on her waist so she could sit properly.

I remember my tita would hum “uh-uuuuhhhh” when she was potty-training my cousins.

This is why I talked to my daughter and repeated the words “poop” over and over again. When she successfully did her business, my husband would excitedly congratulate her.

“Good job, for pooping! Such a good girl. You are the best!”

It was not beyond us to jump with happiness and clap our hands, too. When you have a baby, you celebrate every milestone like she graduated with honors from college.

Can say it, can’t control it

This worked on our end because our verbally advanced daughter would say “poop” when she felt the urge. It was up to us to rush her to the nearest restroom as soon as she says it. While babies can tell you what’s coming, they’re unlikely to control their bowels for long.

As an alternative, babies can be taught the sign language for poop. The baby sign language for it is forming two fists and stacking them on top of each other. The thumb in the bottom is placed inside the upper fist. Then you pull the lower fist downward with the thumb still extended.

I think my daughter also found that doing it in the toilet is more comfortable than doing it in the diaper. Cleaning is easier with a bidet. This was why we didn’t have to deal with soiled diapers for long.

For pee, we followed the baby-led approach. We were not in a hurry to fully potty train her because urine is not as visually disgusting. When we noticed that her diaper would stay dry for longer than three hours, we started making her wear cloth training pants.

Training pants catch the pee but are not as comfortable as diapers. They’re built that way to teach the child that it is better to go in the bathroom. Two months before her second birthday, my daughter no longer needed diapers. Even her backup diaper at night stayed dry overnight.

Now, teaching her how to wash her bottom is something we are working on.