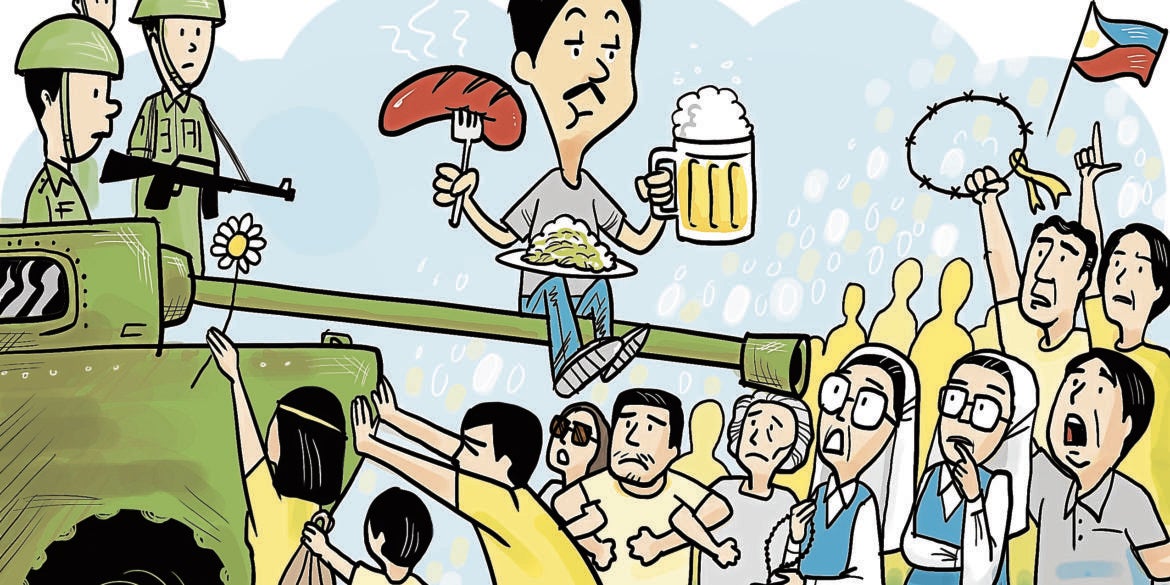 A boomer’s notes on Edsa

A revolution is not supposed to be a dinner party, but then Edsa 1986 was not a revolution. It took us a while to figure that out

Is it weird that, when I think of the Edsa anniversary at all—which is not very often—it makes me think of bratwurst mit senf und sauerkraut?

Everyone who was there has their own private takeaway from the events of February 1986, and this just happens to be mine.

Thirty-five years later, my memories of those early days have started to fade, but the phantom taste of pork sausage with mustard and a side of sauerkraut (with bacon!) remains vivid.

I was 29 years old, working freelance (though temporarily unemployed might have been a more accurate description, given the dire economic situation at the time).

I went out for my usual early Sunday morning bike ride, only to find White Plains Avenue eerily deserted, even for that time of morning. I turned right on Edsa—still no cars. It was when I got to the Camp Aguinaldo gate and I saw the sandbags and behind them soldiers, that I realized that something was going on.

When I got home, my wife told me the news: The uprising had begun.

That afternoon, we joined the people who had begun gathering along the stretch of Edsa from Ortigas to Santolan. Ground zero was the stretch of road in between Camps Aguinaldo and Crame, where the rebel forces were encamped.

Not far past the corner of Santolan, there used to be an Austrian deli called Treffpunkt Jedermann.

After an hour or two at the “sit-in” on Edsa, we took a stroll there for an early supper.

While our fellow middle-class suburbanites prayed the rosary and waited for the loyalist tanks to arrive, we chowed down on gulaschuppe, schüblig and Wiener schnitzel with German potato salad, washed down with beer.

Then, bellies full and happily buzzed, we went home to listen to Radio Veritas until we fell asleep.

We did the same thing the following day. After the people managed to actually stop the loyalist tanks from advancing in a dramatic standoff, we celebrated the victory with another German feast.

The next day, news of Marcos’ flight to Hawaii broke. I had been looking forward to trying Treffpunkt Jedermann’s cordon bleu that night, and was slightly miffed that there was now no reason to go.

But hey, at least Da Apo was gone.

That was the extent of my participation, more or less, in Edsa 1986.

A revolution is not supposed to be a dinner party, but then Edsa 1986 was not a revolution. It took us a while to figure that out.

My other lasting Edsa memory happened a few days later, after Corazon Aquino had already been installed in Malacañang.

The University of the Philippines (UP) had organized a cocktail party for the men of the hour, i.e., the “RAMboys” that had initiated the coup d’etat that had sparked the popular uprising, represented by then Col. Gregorio “Gringo” Honasan, and some of the political prisoners recently ordered freed by President Aquino, including communist party chair Jose Ma. Sison.

If memory serves, the cocktails were held at the Vargas Museum lobby. As I recall, the fruit punch was liberally spiked with lambanog. Post-Edsa euphoria was still in full swing.

A photo op, it seemed, had been arranged where erstwhile sworn enemies Honasan and Sison were expected to share a warm abrazos (or, at the very least, shake hands) to symbolize the national reconciliation that the new government was keen on promoting.

The climactic moment coincided with an a cappella group composed of young UP students in jeans and T-shirts breaking into “Onward Christian Soldiers,” which along with “Bayan Ko” and “Mambo Magsaysay” had become one of the unofficial hymns of Edsa.

My recollection is fuzzy as to the actual sequence of events, but I seem to recall Honasan and Sison eyeing each other warily, as everyone in the room waited for the expected handshake when, out of the blue, a loud shout:

It was Salvador “Bading” Carlos, notoriously eccentric Philosophy professor and UP Diliman fixture, who had been liberally helping himself to the spiked punch, doing the shouting.

He continued to do so while being escorted out of the room, as the a cappella group gamely continued with their song.

No one could figure out if it was the awkward Honasan-Sison photo op, or the words of the old Christian hymn, that he thought was “bullshit.”

Maybe it was the whole idea of “Edsa” itself that he was calling out.

(Carlos died of a heart attack in 1998, reportedly while awaiting trial on a rape charge brought by one of his students, so I guess we’ll never find out.)

In any case, the euphoria didn’t last.

A month before the first Edsa anniversary, 13 farmers calling for land reform were gunned down by plainclothes police in what became known as “the Mendiola massacre.”

It was a rude awakening from the dream of Edsa, and it wouldn’t be the last. Eight months later, student leader Lean Alejandro was assassinated.

In the meantime, the government weathered several right-wing coup attempts, the worst of which led to more than 50 people killed.

On the bright side, freedom of the press had been restored, the newspapers shuttered by the martial law regime reopened, and I landed a job at one of them, allowing me a vantage point from which to observe as the dream of Edsa dwindled away into the formulaic cheese of the annual “disco sa kalye.”

And now, 35 years later, it often feels like we’ve slipped back to where we started.

What’s the point in all this, all you “woke” Gen Zers might ask?