Iza Calzado on finale of 'Ang sa Iyo ay Akin' on TV5: It's 'access to what we had before' | Inquirer Lifestyle ❮ ❯ 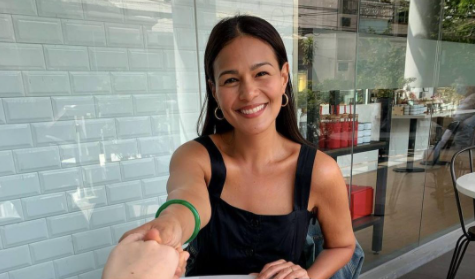 Iza Calzado on finale of ‘Ang sa Iyo ay Akin’ on TV5: It’s ‘access to what we had before’

Although the show is now on its last two weeks, Calzado still feels elated that the show is given a new boost alongside other ABS-CBN shows like “FPJ’s Ang Probinsyano,” “Walang Hanggang Paalam” and “Pinoy Big Brother: Connect.”

“It’s not about me, it’s about the show itself being granted, beyond just our shows; the shows of ABS-CBN being granted access to what we had before,” she said during the online press conference on March 5 for the show’s finale week.

The government denied ABS-CBN its franchise last year, forcing the network to have its programs shown in digital platforms, until they were given the chance to air on free TV by Zoe Broadcasting Network Inc. through its rebranded A2Z channel 11.

Calzado stressed the importance of the show’s airing via TV5, while touching on the government’s denial of franchise for the network.

“Bakit ba natin ginagawa ito? Para magsilbi. Anong klaseng serbisyo ‘yon? (Why are we doing this? To serve. What kind of service is that?),” she asked. “When you are robbed of something, that is taken away from you, the minute it’s given back to you, you treasure it.”

For her, though the show cannot be aired on ABS-CBN, the development is already a big deal.

(Maybe I was just so surprised because I did not see it coming. And who would have thought that in our last two weeks, more people will be able to watch our show?)

Calzado also shared that despite the franchise denial, people still found ways to catch the show.

“At malaking bagay ‘yun (And that is really a big deal). I have friends telling me na they’re watching the show in New York, different parts of the world. Ang dami naming naabot (We have reached a lot of people). Paano pa kaya kung (What more if) if we had a franchise?” she added.

“Ang sa Iyo ay Akin” was created by Julie Anne Benitez and Dindo C. Perez, and airs Mondays to Fridays at 8:40 PM on A2Z channel, and starting today at TV5. Digital TV box users can scan and look for A2Z channel in Metro Manila and in some parts of Cavite, Laguna, Quezon, Rizal, Bataan, Batangas, Bulacan, and Pampanga. Viewers can continue to follow the show on the Kapamilya Channel on cable and satellite TV. JB