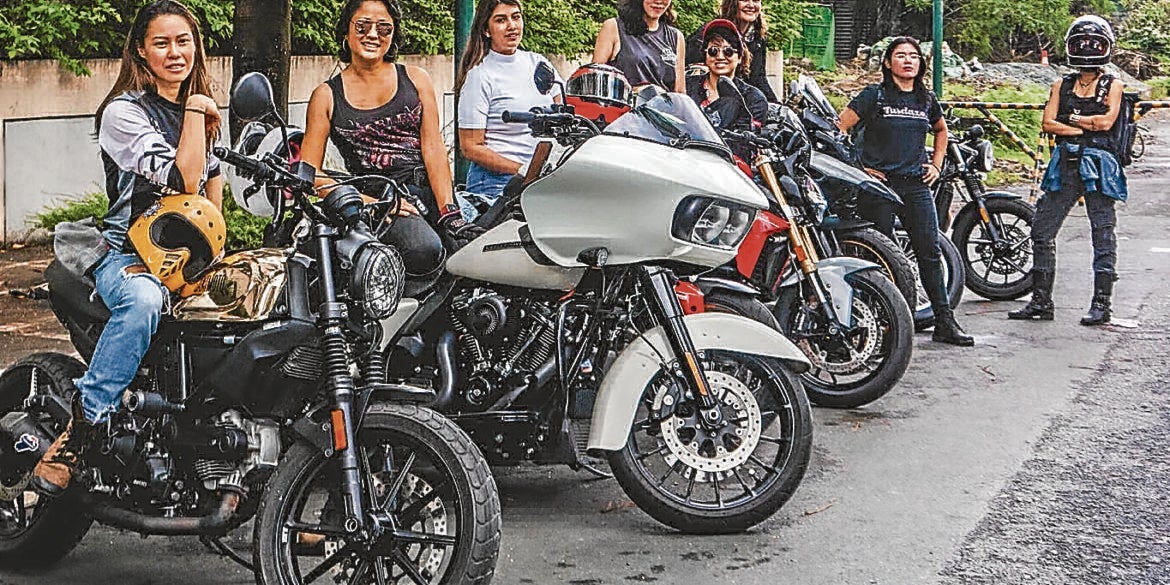 The Litas Manila: To hell with back-riding.

No ‘back warmers’: More Filipinas hitting the road on two wheels

The sisterhood has grown, encouraged and enabled by other women confidently handling bigger-displacement motorcycles

Ever since Marianne Faithfull squeezed herself into a skin-tight black leather catsuit and hit the road on a Harley Davidson Electra Glide in the 1968 film “Naked Under Leather,” “The Girl on a Motorcycle”—which also happens to be the film’s alternative title—has been an iconic, if transgressive, image.

Motorcycles have always represented freedom of movement and freedom from conformity and social constraints. When Marlon Brando is asked what he is rebelling against in the 1953 film “The Wild One,” the movie that sealed the motorcycle’s rebel image, he asks, “What have you got?”

Until fairly recently, however, men have claimed this freedom largely for themselves.

The few women who have dared to take up motorcycling have been outliers: lonely pioneers forging on ahead against the odds, such as Elspeth Beard, the British architect who rode her BMW R60 around the world in the early 1980s.

All that is changing.

In the Philippines, due to our never-ending transport nightmare (first traffic, now a pandemic), the sight of a female rider going about her daily business on a scooter or underbone no longer merits a second glance.

A woman on a big bike, on the other hand, riding confidently, for her own pleasure—still turns heads.

Leisure riding—as opposed to purely utilitarian commuting/errand running—was until quite recently an exclusively male domain. When they are allowed into this world at all, women are invariably relegated to riding pillion. (The condescending term for a lady pillion is “back warmer,” and we won’t repeat the slang term for the back seat.)

Increasingly, however, Filipinas are saying, “Sc–w that!”

Alone, or in women-only motorcycle clubs such as The Litas Manila and Honda Rebelles, they are taking over the handlebars and hitting the highways in growing numbers.

“I think social media has a lot to do with it,” says Gaki Azurin, better known to the 64,500-plus subscribers who follow her YouTube vlog as “GakiMoto.”

Seeing other women confidently handling bigger-displacement motorcycles has a salutary effect on would-be female motorcyclists, she says. It boosts their confidence, encourages and enables them.

There are more role models for women now, she adds. She mentions female celebrities who ride, such as Yassi Pressman and Iya Villania.

A lot of women also get into motorcycles because of husbands or boyfriends who ride, she says. Eventually they figure out that riding is a lot more fun than back-riding.

Azurin’s own journey is illustrative.

“I always wanted to have a motorcycle, ever since I was little,” she told Lifestyle in 2016. At that time she was riding a KTM Duke 200, shuttling between three gigs: as a personal trainer, drummer for indie rockers Flying Ipis and “GakiMoto,” her start-up vlog on YouTube.

Her initial vlogs were humorous commentary on life on Philippine roads, encounters with traffic enforcers, reckless motorists cutting into her lane.

As her vlog began to gain more followers, however, Azurin has become something of an influencer herself.

“Now I get a lot of support from the dealers,” she says. “They invite me to a lot of events.”

She’s also traded up a few times: Her current ride is a sweet BMW F900R. “It’s a fantastic bike,” she enthuses.

She admits, however, that occasionally, keeping the vlog up starts to feel too much like work. Those days, she says, she leaves the camera at home.

“I want to go back to just enjoying the ride,” she says. She’s not a lone rider anymore, either.

In 2017, with two other riders, Azurin started the Manila chapter of The Litas, which is a global community of female motorcycle riders. By the time they formalized The Litas Manila, a handful of other riders had signed up.

Most of them felt excluded from the heavily testosterone-fueled fellowship of men’s motorcycle clubs.

“Women like to take care of each other. Men like to measure dicks. So, pabilisan ‘yan. It’s like a maternal instinct that we possess. It’s a sisterhood. I don’t think we’ve ever told another girl, ‘O bilisan mo.’ We always say, ‘Go at your own pace, I’ll ride beside you.’”

Fast-forward to 2021: The sisterhood of the traveling riding pants has grown, such that The Litas Manila can usually count on a dozen or so for their regular group rides.

The phenomenon is not limited to Manila, either. Last year, a Davao chapter of The Litas was formed, and other women’s motorcycle clubs, such as Honda Rebelles, have emerged.

This has not gone unnoticed within the motorcycle industry, which has begun to tailor some of its marketing for female riders. A recent video for the new Husqvarna models, for instance, included The Litas’ Fernandez in its roster of “influencers,” along with Sam YG, Jay Taruc, Drew Arellano and Raimund Marasigan.

All of this seems to point to more female motorcyclists in the “new normal.” Deal with it. —CONTRIBUTED