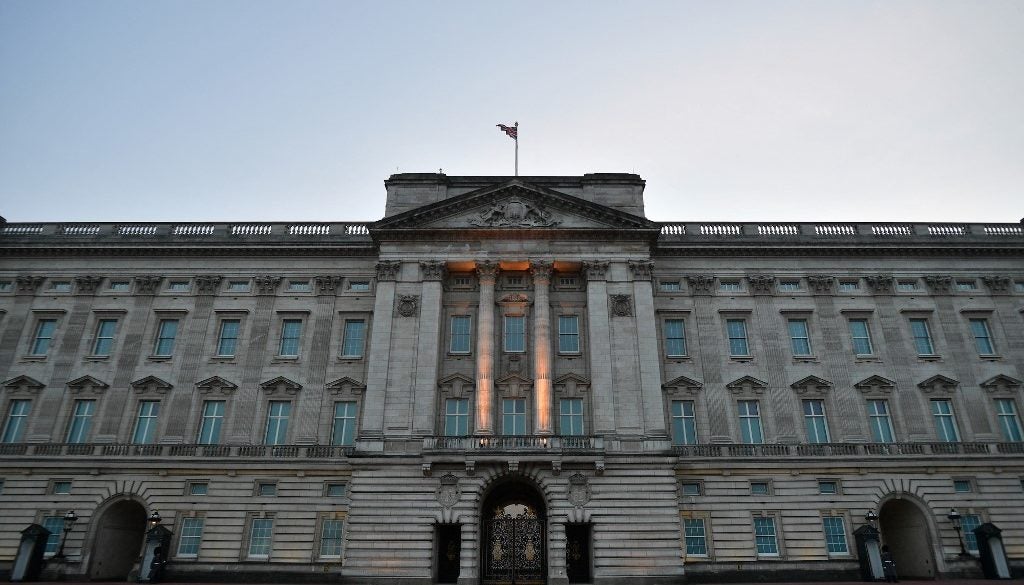 Buckingham Palace, the official residence of Britain's Queen Elizabeth II, is pictured in London at dusk on March 9, 2021. - Queen Elizabeth II is saddened by the challenges faced by her grandson Prince Harry and his wife Meghan, and takes their allegations of racism in the royal family seriously, Buckingham Palace said on March 9, 2021. "The whole family is saddened to learn the full extent of how challenging the last few years have been for Harry and Meghan. The issues raised, particularly that of race, are concerning," the palace said in a statement released on the queen's behalf. (Photo by JUSTIN TALLIS / AFP)

LONDON — The British monarchy’s immediate survival is assured, despite Prince Harry and his wife Meghan’s claims of racism, experts say, but cultural rifts exposed by the row could signal trouble ahead.

The revelations are a “soft-power disaster for Britain” that raise questions over whether the monarchy “can, or should, survive at all without the Queen at its head,” according to The Times’ diplomatic correspondent, Catherine Philp.

But polling at home suggests the couple’s explosive interview with US chat show host Oprah Winfrey has so far had little impact on the popularity of the 1,000-year-old institution.

Around a third of people told YouGov that their sympathies lie mostly with the royal family, while only 22 percent said they had more sympathy for Harry and Meghan — a four point rise since the interview was aired in Britain on Monday.

“This is certainly a crisis for the family, but that’s the royal family as a soap opera. It’s not a crisis for the institution of the monarchy,” said Robert Hazell, professor of government and the constitution at University College London.

“It would only become a crisis for the institution if opinion polls began to show that it had significantly reduced support for the monarchy,” he told AFP.

Queen Elizabeth II, who has been on the throne since 1952 and is now 94, remains hugely popular, with a 79-percent approval rating that politicians can only dream of.

An Ipsos Mori poll this week also indicated that only 17 percent of people believed the country would be better off without a monarchy.

But the family is reeling after a year in which Harry and Meghan quit and questions swirled about Prince Andrew, the queen’s second oldest son.

He caused anger by giving a disastrous television interview defending his relationship with the convicted US sex offender Jeffrey Epstein, and denying claims that he had sex with a 17-year-old girl trafficked by the disgraced financier.

A closer look at the polling also reveals a much less favorable opinion of the queen’s oldest son and heir Prince Charles, 72, and a sharp contrast in the attitudes between younger and older generations.

“Charles is the named member of the royal family who perhaps emerges worst from the (Harry and Meghan) interview, potentially a far greater problem for the monarchy than the characterization of an anonymized, uncaring ‘Firm’ that Harry suggested even the Queen was at the mercy of.

“The generational divisions also bode ill for Britain’s image overseas, with the under-40s far more supportive of Harry and Meghan’s version of events than their elders.”

The charges of racism against an unnamed senior royal particularly resonate with Britain’s younger generation, which has grown up in an increasingly diverse country.

Only 29 percent of the 18-34-year-olds polled by Ipsos Mori said Britain would be worse off if the monarchy was abolished.

“When the Queen dies, the difference that Prince Charles faces is that he will be a very elderly monarch. He will be nothing like the young Queen Elizabeth in 1952,” said Hazell.

“It is quite likely the tabloid press will run opinion polls saying, do you want Prince Charles as king or do you want that young and attractive Prince William?

“I think that will be difficult for the monarchy.”

But he added that younger people had historically tended towards republicanism, before becoming more sympathetic as they grew older.

While republicans sense an opportunity as the queen’s long reign draws to a close, they still face daunting obstacles in bringing down an institution that has weathered centuries of scandal, intrigue and plots, and is an integral part of British cultural life.

“They would have to change the constitution,” said Hazell.

“Although this isn’t written… all commentators have accepted that such a significant change would require a referendum.”

Britain has endured five torrid years of division and constitutional wrangling since deciding to leave the European Union in a 2016 referendum.

Neither of the main political parties has shown any enthusiasm for another seismic vote.

And even if Charles proves unpopular, “that’s not a threat to the monarchy as an institution, it’s a threat to Charles as king,” added Hazell, with the more popular Prince William, his eldest son, 39, waiting in the wings.