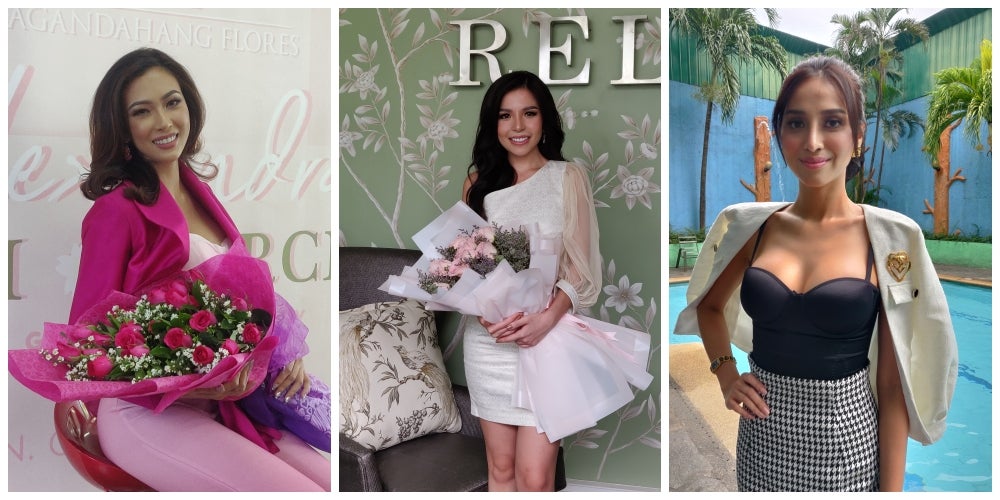 MANILA, Philippines —Three aspirants in the 2020/2021 Binibining Pilipinas pageant are already familiar with the beauty contest circuit, as they have already set foot in the national arena before.

Vianca Louise Marcelo, Alexandra Faith Garcia, and Meiji Cruz are staging their pageant comeback, this time promising to be stronger, and better than in their respective first forays on the national beauty contest scene.

The three ladies are entrants of the beauty pageant training camp “Kagandahang Flores,” which has produced many national and international titleholders, including Bb. Pilipinas alumnae Precious Lara Quigaman and Bea Rose Santiago who both took home the Miss International crown, and the first Filipino Miss Intercontinental winner Karen Gallman.

Marcelo, 26, already has a string of titles under her belt. She was Miss Silka Philippines in 2011, and bagged the Reyna ng Bulacan crown in 2014, paving the way for her entry to the 2015 Reyna ng Aliwan where she finished third.

In 2015, she took part in the Miss World Philippines pageant where she received the Best in Talent award and finished in the semifinals.

“I blacked out in the question-and-answer round. And that left me traumatized,” Marcelo confessed, saying she had decided never to join pageants again.

But Kagandahang Flores head Rodgil Flores, her family, and friends, did not give up on Marcelo. After earning a degree in Hotel and Restaurant Institutional Management at the De La Salle-College of Saint Benilde, Marcelo found herself empowered, and better than before.

Garcia, meanwhile, first joined Bb. Pilipinas in 2016. Since then, she has participated in triathlons and has advocated a healthy lifestyle.

She has also become an active campaigner for One Kidney Transplant Philippines and was tapped by the Department of Agriculture to promote food security, and to spread awareness on the rabbit meat industry.

“It took me long to have the strength to join Bb. Pilipinas again, because I wanted to focus on sports,” Garcia shared.

But the longest gap is that of Cruz, who was last seen in the 2012 Bb. Pilipinas pageant, which produced Miss Universe first runner-up Janine Tugonon.

Since then, Cruz has been busy with school, finishing multiple degrees in Mass Communication, Psychology, and Guidance and Counselling at Saint Scholastica’s College.

She said her school taught her to be “socially aware, and to speak up on social issues and politics.”

Cruz has also been advocating on women empowerment and gender equality, and for the welfare of the marginalized sectors of our society.

In 2019, she finally made the decision to give pageants another shot, and started training for the 2020 pageant. She hopes to use the platform to spread more awareness on the causes she believes in.

But the pageant was postponed because of the COVID-19 pandemic. It was only in January when the Bb. Pilipinas Charities Inc. (BPCI) announced the contest’s resumption, and set a coronation date on April 17.

The pageant will crown the Philippines’ representatives to the Miss International, Miss Intercontinental, Miss Globe, and Miss Grand International pageants.