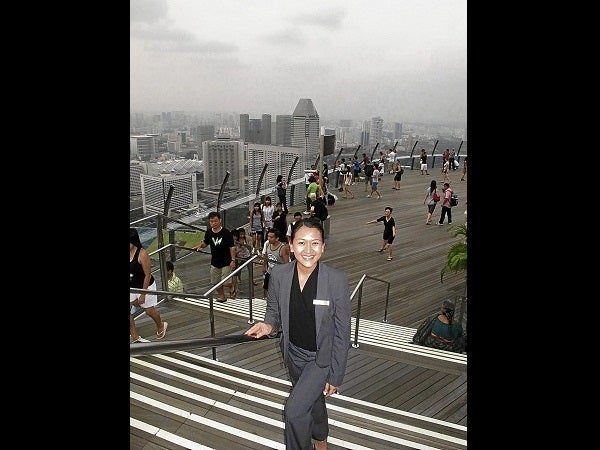 When in Marina Bay Sands, look for Ella

It makes us proud when a fellow countryman makes a mark on foreign soil. I know we can name so many at this point, but this time I will introduce to you someone who, from my point of view, has so much power to wield yet has remained humble.

I met Ella around five years ago when I was doing a lecture on photography in Singapore. I was billeted at the same hotel where she was working. We became friends instantly because we shared so many similar stories and experiences; we kept in touch even when I was back in Manila.

I lost contact with her eventually because I changed phones, and so did she. But thank God for social networks; we soon reconnected again. When I found myself some R&R time in Singapore, I posted a tweet that I was in the country. Instantly, my phone rang with a local number I did not recognize.

It was Ella. She wanted me to visit her at the Marina Bay Sands. I asked what was she doing over there since I faintly remembered she was with another hotel on Orchard Road. She simply asked me to get my butt to Marina Bay Sands the next day so she could tell me the juicy details.

I arrived at the Marina Bay Sands and was greeted by the sight of the enormous atrium lobby and three giant lanterns that adorned the interior. The lobby was packed like the Grand Central Station. Ella appeared out of nowhere, explaining that it was the Chinese New Year, hence the crush of vacationers. She pulled out an access card that looked like any other ordinary access card, but somehow I felt it hum with power.

“Follow me,” she said. A private elevator opened for us, “Only special VIPs use this to avoid the crowd,” she told me. Next thing I knew, I was on the rooftop of Tower One, and she was offering me coffee or champagne.

“At 10 in the morning?” “Why not?” she replied with a grin. She then escorted me through the Sky on 57 restaurant, past another door which revealed a breathtaking view of the bay. What a way to start the morning—champagne, the view and the life of the rich and famous.

That’s just a glimpse of Ella’s glitzy life in Singapore. It did not come easy, since she has family left behind in Manila (she’s originally from Bacolod). Ella has made it to where only a few Filipinos have tread. Recently, she was awarded the Excellent Service Award 2011 by the Singapore Hotel Association, a highly prestigious award that recognizes individuals who have delivered outstanding service in the hospitality industry.

And if I’m not mistaken, this is the third time she has received this award since 2009!

Ella continued to give us the VIP tour of Marina Bay Sands. She didn’t tour us like any other guide, but more like a friend excitedly sharing the things she knew. You could see it in her eyes and hear it in her voice. She was genuinely proud of the things she was showing us.

From our outdoor lounge, she pointed out the enormous Louie Vitton flagship store, the new ArtScience Museum, and the all the neighboring landmarks. The Marina Bay Sands is itself a new landmark, now used along with the Merlion in all the country’s tourist programs.

We crossed the three towers of the hotel via the famous infinity pool, to end up on the other side where the public observation deck was situated. Only guests of the hotel have access to the pool. The security is so strict that despite Ella being with us, we were checked. I like that in a hotel. Makes me feel safe.

She then took us to the Banyan Tree Spa, where the cheapest treatment cost some S$240. It’s supposed to be the best spa in the world. Using the private elevator again, she gave us access to a private part of the casino to show off the most expensive Swarovski chandelier in the world! And this sits above the casino floor. I doubt if the people gambling ever notices this, unless it rains crystal on them.

We left the casino and found the theater housing the musical “Wicked.” I am definitely coming back to watch this. Then, onwards to a mall directly connected to the hotel and the casino. Talk about self-contained and self-sufficient. You don’t even have to leave the hotel for anything. The mall is so amazing, housing almost everything you want—if you’re a shopaholic like me.

And did I mention food? Ella has connections to the best restaurants in the place. She knows people in the right places if you can’t get a table in your favorite restaurant. I must remember to fast when I see her again. Not just food, but also pastries and chocolates—she knows where to get the best of them. I wonder where she puts all the calories when she eats such food. Maybe she has a fast metabolism, maybe it’s all the walking from floor to floor or tower to tower. But let me tell you, she is fit.

Ella is a find that you want to share and boast about. That’s why I never hesitate to introduce her to my friends. Now she rubs elbow and are friends with Bobby Garcia, KC Conception, Karylle and Maria Ressa, just to name a few. And yes, she has assisted international guests, heads of state and celebrities, among them Katy Perry, Lady Gaga and Justin Bieber.

So, will you look for her in Marina Bay Sands and ask for a special tour? You can try. With the amount of work and the responsibilities she has, I think we all need to make an appointment next time. But at the end of the day, I am proud that I met Ella, not because of the connections and the privileges that come with her work, but because she makes me proud of her—a fellow Filipino whose great success shows that, with hard work, achieving one’s dreams is possible.