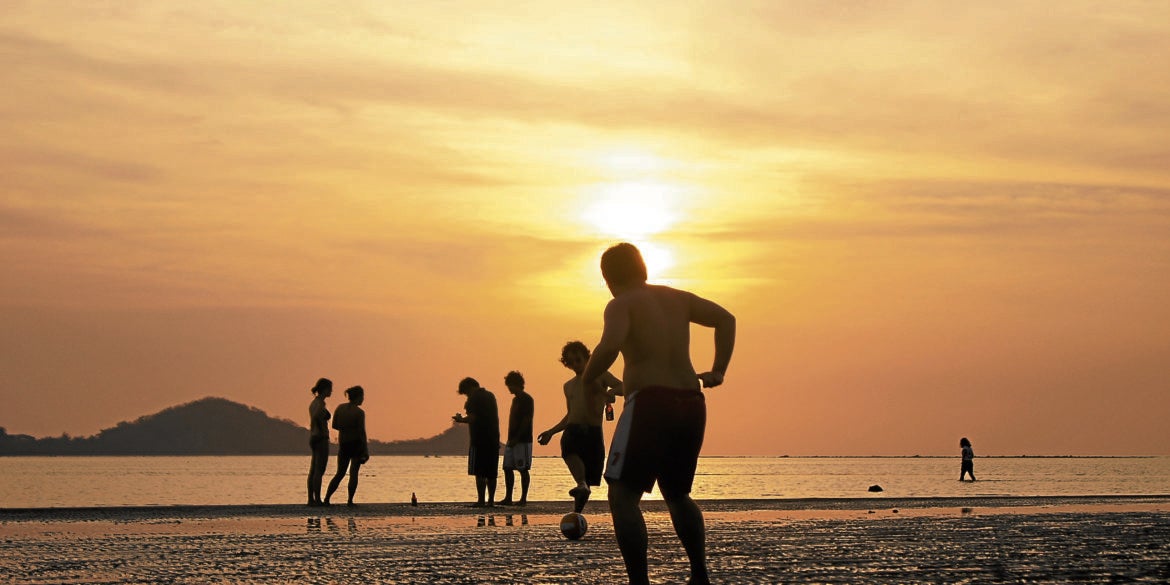 “As adults, we dropped the ‘sand,’ but retained the ‘bar,’ as we dragged along bottles of San Mig Light while we hunkered down on the sandbars.”

We were city kids, but we liked saying that we grew up by the beach . . . Those days are etched deeply in my memory

The setting sun was performing its daily recital. It was a spectacular, glowing ball, glorious as it danced its finale, and then faded out slowly, into the depths of the ocean that stood before us.

“Bye, sun,” Tita Tricia boomed in her usual larger-than-life manner. A chorus of tiny voices echoed her, “Bye, sun!” The sky yawned, and breathed out rosy hues onto our faces, casting baby shadows on the sand that grew bigger and darker.

Our little fingers grasped at the earth, fistfuls of sand falling back through. We turned to catch the bonfire being lit, and watch its embers grow until they glowed, as if they’d fallen from the sun before it went into hiding. It was a typical night in Matuod beach in Lian, Batangas. I must have been around 7 or 8 years old.

We were city kids, but we liked saying that we grew up by the beach. In truth, we never spent more than several days there each summer, with a second trip back later in the year if we were lucky. But those days are etched deeply in my memory.

Several of our parents’ friends had rest houses along a private strip of beach, and each trip was planned so that all the kids could enjoy the sun, sand and sea, and the parents could get drunk and relive their youth.

There were so many of us that we fancied the idyllic cove our own little neighborhood, with families distributed among the three or so houses. It became our playground for the handful of days and nights we spent there—fleeting in length, but absolutely lasting in impact.

Yearly, the passage of time and arrival of a much-awaited schoolchild’s summer came to be measured by the marking of the calendar: x days left until our annual Matuod trip.

The anticipation began weeks before we were scheduled for a trip. Mommy would go over our summer gear, and check if there was anything we needed to replace or buy. Then she would stock up on potato chips, soda and other very unhealthy options for growing children. I would pack my little duffel bag days in advance, heady with excitement for the out-of- town trip. I would wake up before the rest of the world, ready to zoom into the van.

My earliest memories involve staying in a big house right smack in the middle of the cove. If you were standing in the ocean and looking toward the shore, you would first spot white plastic lounge chairs, perhaps a canoe or two, maybe a jet ski, on the property. Then your eyes would come to rest on a row of coconut trees, their giant fronds clasping each other to form a gate up in the air, the tip of the house peeking out, as if to catch a glimpse of the sea.

It was an exceptionally large house, and I believed it could sleep a hundred. It was open, with barely any screens installed, except in the dining room, kitchen, and the five or so real bedrooms on the second floor. But otherwise, the sea breeze wafted through the outdoor dining area, to the beach volleyball setup, and into the open shutters and doors to swirl through the house.

The second floor was, with the exception of the real bedrooms, just basically one giant balcony, with beds crammed into every possible space. Hence, my childhood belief that the house could sleep a hundred. All the kids slept out on the balcony, under mosquito nets, except for me and my siblings. We were never allowed. We had to sleep in our assigned family bedroom, under our mother’s watchful, overprotective eyes.

The moment the sun came out in the mornings, we were in the water in a flash. We would spend all day making our fingers and toes pruny, with breaks to toast ourselves to a crisp building sandcastles. But when we were feeling really brave, we ventured out to the “Red Bear.”

The Red Bear was nothing more than a point in the water where the incoming waves became bigger. In truth, they were hardly over 2 feet, but compared to the foamy ripples that washed ashore, these were gigantic. I don’t even remember how its name came to be. Perhaps 6-year-old Joseton had dreamed it up one afternoon. When we were feeling brave, usually at noon, our 3-to-4-foot childhood selves slogged through the saltwater to get to the Red Bear. Our heads and shoulders still popped out above the water, and our hair would only get wet if we went under a wave.

The sea was a wondrous place. For me, it meant an hour or so without my mother breathing down my neck. Years ago, we found all manner of sea creatures not too far out from shore. There were the white “ghost crabs” scuttling about on the sand, which we would try to catch with our bare hands by literally pouncing down on the ground. The “army crabs” were lavender and orange, covering the sandbars like ants on a lollipop. But an audience with them required an early morning wake-up call. The jellyfish were plenty, and although they terrified us with their stings, we managed to get close enough to observe that they came in a rainbow of colors.

One late afternoon, as we were traipsing around in the sandbars, we even came across a jellyfish the size of a dinner plate on the sand. It was covered in white polka dots, a sight to behold. But the most incredible discovery we stumbled upon came when we were half-submerged in the sea once. We were talking and laughing rowdily, the way children do, when one of us noticed that the carcass of a tiny seahorse had floated into our circle. Eyes widened, fingers poked. However, I don’t think any of us truly understood what a truly rare sight it was.

If we caught a lot by casting our eyes downward, raising them to survey our surroundings took our breath away as well.

Matuod was a precious alcove of serenity, with waters so calm and subdued that our parents even let the babies frolic about. Hills and mountains jutted out behind the houses and trees, jaw-dropping exclamation points from Mother Nature. The golden hour of each afternoon was magical: the sun’s warmth draped itself over the mountains and the tops of the palm trees, making the brown sand glow. The light sprinkled glitter on the sea, I thought, and made the blue twinkle as it extended out to the skies.

The best place to be during golden hour was on Matuod’s sandbars. You could take a 360-degree turn while on it to take in all the natural splendor: the mountains tracing the outline of one side, peppered green by foliage and dotted with homes, and a big canopy of blue on the other, sky and sea coming together to make you wonder where one ended and the other began.

As young children, we would put on our floaters and salbabidas, and “swim” the 2 to 3 feet depth of warm water to reach the sandbars in the middle of the cove. They became the venue for agawan base, without any real bases, as well as aimless habulan and rolling around.

As we grew, there were football matches and impromptu martial arts sparring, as well as the hushed secret conversations of adolescence. And eventually, as adults, we dropped the “sand,” but retained the “bar,” as we dragged along bottles of San Mig Light while we hunkered down on the sandbars. Beers in hand, we would watch the sun set, feeling large, having grown so much since and having watched the same sunset countless times, and simultaneously, so tiny, in the face of Mother Nature showing off.

Unfortunately, the big house burned down one year, during the rainy season. I learned about it through a tearful phone call from one of the other kids, Samantha or Sam. Her family eventually bought the lot where the big house once stood, keeping the land, as us kids liked to joke, “within the family.” For several years, we would stay in the other houses during visits. The rebuilding of the big house was gradual, but we continued to troop to Matuod almost annually.

We were enamored by the place as children, but the older we got, the more deeply we fell in love with it. Once, in my mid 20s, I was standing on a sandbar during the golden hour, a beer in my hand, my sister Trixie on one side, and Sam on the other. We were watching the younger kids carry on with a football match. I took a deep breath of the salty air, took in the beauty of the landscape, and openly declared, “This is my favorite place on earth.”

I meant every word. —CONTRIBUTED INQ