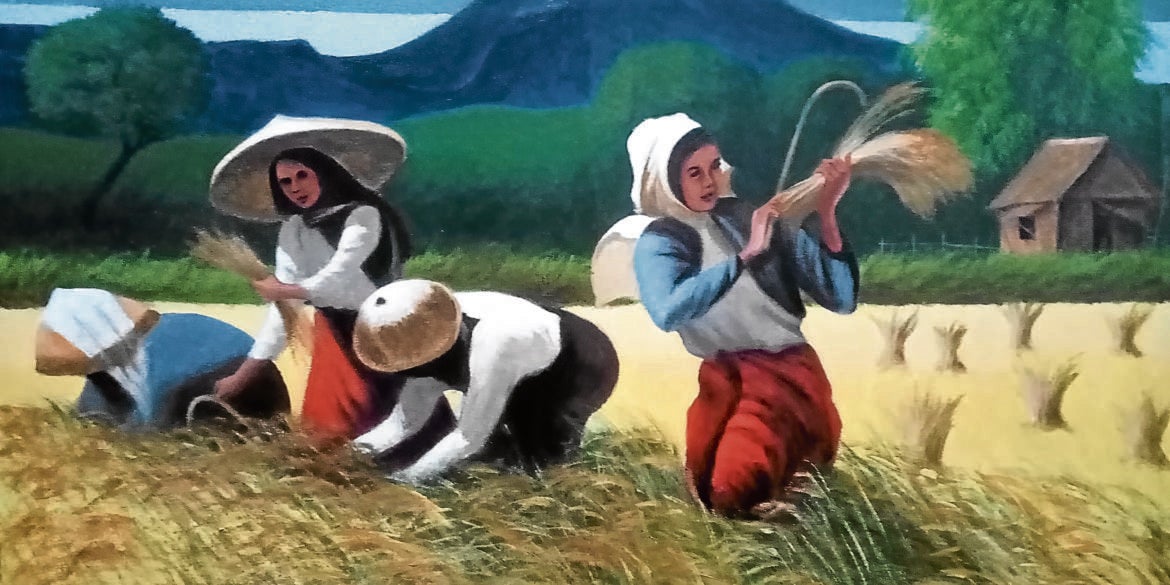 ‘Davao Contemporary Art,’ until April 25, features 80 works from 42 artists across genres and mediums

DAVAO CITY—Even without COVID-19, an artist’s life has always been a life on lockdown, quips Brando Cedeño, the Davao sculptor whose works were among those featured in “Davao Contemporary Art,” the newly opened exhibit here by Dabawenyo Artists Federation Inc. (Dafi)

“Before COVID-19, I was already working 10 to 12 hours a day, and would only go out for a meeting or coffee with friends,” he said. “Except for this creeping fear of getting the virus, life under COVID-19 has not really changed that much for me.”

Cedeño has been among the sculptors most in demand in Davao, recently winning a commissioned work for a Datu Bago monument about to be put up in the city. For most of last year, as the pandemic raged and the government placed the entire country under lockdown, he was doing commissioned works.

But just like other commissioned artists, he often feels torn between doing the works someone else wanted him to do and the works he wanted to do, himself. “Commissioned works have a way of draining you of energy, so, to recharge myself, I do the works that I want on the side,” he said.

His impressionistic stonecast on a rock slate, “Woman,” inspired by Fernando Amorsolo’s “Lavandera,” is among the works that had energized him in between long stretches of his other works.

It is among the 80 artworks by 42 artists featured in the Davao exhibit, which runs until April 25 at SM Lanang Premiere.

Dafi described the exhibit as a showcase of artworks by living artists specializing in different genres and media, reflecting the psyche of the moment.

Organized only in 2019 with 15 artist groups as members, Dafi has already mounted three virtual exhibits during the pandemic before embarking on this first physical exhibit. “Art speaks volumes despite being confined within a frame,” said Vic Secuya, the curator of the show.

“Artworks exhibited physically during these trying times—when so many protocols had to be followed, money for most people is limited to essentials, movement of people is controlled—makes an artist feel important and recognized,” said Amado Santos Munda Jr., known here fondly as “Dinky,” cofounder Tabula Rasa Art Group, one of the artist groups that compose Dafi.

“We are grateful to the community, thus, the mission to do more artworks persists no matter how difficult it is,” Munda said, referring to the shortage of art materials during the pandemic and the government’s order barring seniors from going out.

Among the paintings on display, Munda’s “Flamenco Dancer” (24 inches by 60 inches, acrylic on canvas) was inspired by a concert done by star pupils and teachers of a flamenco school by the banks of Triana River in Seville, Spain, which he visited in 2018.

This year, in the midst of the pandemic, he finished the painting “Lady in Red,” (24 inches by 60 inches, acrylic on canvas) inspired by the song of that title by Chris de Burgh.

Before the pandemic, this former finance executive of Intel in California and retired general manager of Pearl Farm Resort here, had traveled extensively around the United States, Asia and Europe, and had visited all the major museums and galleries around the world.

Now, amid difficulties, he realized the advantage of the pandemic to his art. “People with excess money can’t travel so they buy what makes them happy, and mostly, artworks like paintings, sculptures are easily sold,” said Munda, adding that artists had sold more paintings this time than in the pre-COVID-19 exhibitions.

The gloom of the lockdown found symbolist artist Ega Carreon scribbling poetry. “It’s so depressing that it inspired me to write a poem,” he confided.

But his works “Usbong” (Sprout) (16 inches by 40 inches, acrylic) and “After the Storm” (32 inches by 33.6 inches) can almost be perceived as poetry on canvas, a telltale influence of his interaction with poets and artists in Vermont Studio Center in Vermont, United States, where he won a two-month residency in 2000 and where he went again in 2016 after he won the alumni merit award for artist residency.

“Most of my works have spiritual content,” he said, referring to the imaginative flower in his work, “Usbong.” “As an artist, I’m in a stage [where I’m] seeking spiritual growth and this has been translated into my paintings,” he said.

He started “Usbong” in 2018 but considered it as a new work because of the new changes that he put in. He also liked to address the metaphor of his other work on display, “After the Storm”: “We are like leaves, we only stay here for a particular season,” he said.

Carreon has also exhibited his works in Berlin, Barcelona, Washington, New Jersey and New York City. He was finalist of the Can Serrat International Artist Residency in El Bruc, Barcelona, Spain, in 2014, aside from the Mindanao Art Awards in 2010 and the Philippine Arts Award in 1998 and 1999.

His travel and interaction with other artists widened his perspective about art and particularly recalled one of the poets he met whose rendition of his own poem, “was so hypnotic, it allows your imagination to travel,” he said. “That’s what I want to achieve in my painting.”