Black humor and the art of the pandemic | Inquirer Lifestyle ❮ ❯ 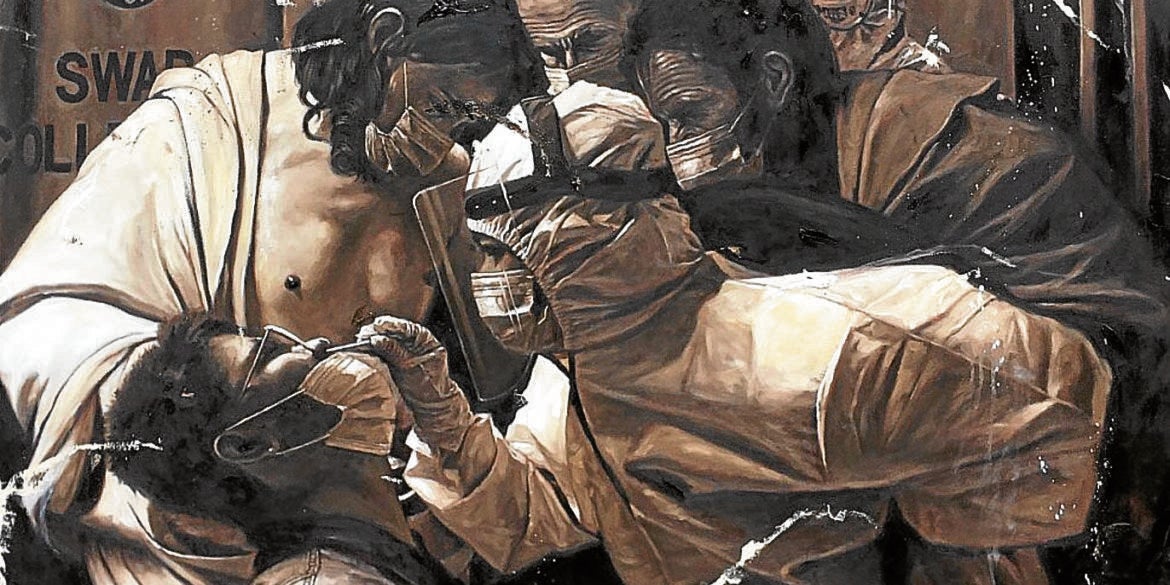 How do artists tackle the pandemic in their works?

Rather than tackle directly the gargantuan health crisis, Monnar Baldemor sticks to something closer to home: domestic stress as a result of lockdown.

In “Quarantine Sanctuary: Rekindling the Love of Home” (Artologist, Edsa Shangri-La Plaza; tel. 0286963244), she addresses her new works to viewers already harried and harassed by the work-at-home lifestyle imposed by the COVID-19 pandemic.

She seems to bid them to take a pause from the rat race of their domestic labors (in fact there’s a rat in one painting of a work-at-home woman careerist); she urges them to look around them and smell the flowers.

Her cheerfully colored works are a balm to these anxious times, and the viewers are advised to take them all in, like the vaccine doses that the nation direly needs but never seem to the forthcoming.

The same playfulness but bordering on dark humor is evinced by Mark Martinez in “Kontak Treysing” at Art Verite Gallery (Shops at Serendra, Taguig), in which the artist applies his excellent pictorial skills and his appropriative style to depict the pandemic in canvases of weather-beaten sepia monotone to devastating humorous effect.

Again the milestones of western art are appropriated by Martinez to comment on the health emergency. Vermeer’s “Girl with a Pearl Earring” is recast minus the earring, obscured as it is by a comical face mask; she’s shown holding a bottle of Green Cross rubbing alcohol. A hand in the foreground points a temperature gun at her forehead.

Ditto with the “Mona Lisa” with an even more comical face mask and holding a Casino ethyl alcohol bottle. She too gets shot by the temperature pistol: Even iconic universal figures have to subject themselves to humiliating health strictures.

Meanwhile, Grant Wood’s “American Gothic” gets a “Philippine Gothic” treatment: the two familiar figures from the American Midwest are transposed to the chaos and squalor of Metro Manila, the father holding a Lysol disinfectant spray while behind them is looming the tawdry façade of Puregold supermarket, as if to say the merry ring of commerce and consumerism continues amid the death knell of the pandemic.

But the black humor threatens to trivialize the crisis. One realizes that the art of appropriation, as in Andy Warhol’s banal appropriations, may be nothing but cynicism and a refusal to commit, to empathize. To appropriate art in a time of grave crisis may be another instance of the banality of evil.

Perhaps the most striking work here is the recasting of Caravaggio’s “The Incredulity of Saint Thomas,” in which the COVID-19 patient becomes the Christ; the scars of the crucifixion are replaced by the symptoms of the novel coronavirus that are being detected by the doubting Thomases of the medical community.

The seriousness of Caravaggio’s original work suits the seriousness of the very dire crisis. And all that Martinez has to do is to recast the old figures into contemporary ones, without cynicism, without the clever tricks of the art trade.

Raul Isidro doesn’t directly address the health crisis, but he somehow provides a healing solution to it in his exhibit, “The Natural State of Being,” at Galerie Joaquin Podium (tel. 0926-7227925).

The new series continues his explorations of the Philippines’ monumental topographic formations, an art of archaeology if there was one. Again his abstractions seek to mimic and limn the contours and configurations of nature, its rich patterns, and its colorful light and shadows.

In his previous exhibits of landscapes and topography, he made references to Greek cosmology, especially that of the pre-Socratic philosopher Empedocles, which sought to identify the material principle in an orderly universe: Is it aqua (water), aer (air), ignis (fire) or terra (earth)?

Now he links his Philippine landscapes not only to classic cosmology but also to ontology—nothing less than “The Natural State of Being.” He links nature to nothing less than a universal ecosystem that is nothing less than humanity’s cosmology. Only by maintaining the balance and connection of all this, he seems to say, could one attain healing and well-being.

More than pinpointing which is the more principal of the elements, Isidro seems to delight in their interaction. Rather than depict the minerals and elements as inanimate, he shows them living, breathing, with a vitality that throbs in living color. Again and again, Isidro the master abstractionist shows the ever-renewing power of abstraction, spiritual connection and universal communion. —CONTRIBUTED INQ