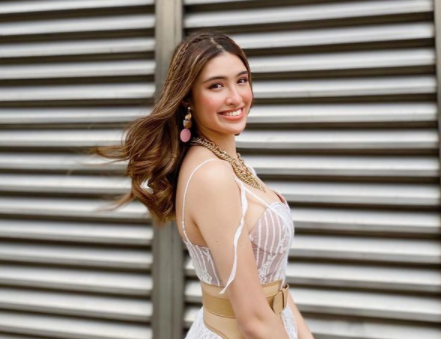 Sam Cruz, daughter of actors Sunshine Cruz and Cesar Montano, thought it “surreal” when she found out that she had an offer to join Squad Plus composed of Angela Ken, KD Estrada and Anji Salvacion.

“It was very surreal when I found out po. My mom said, ‘Sam do you want to join? They’re asking me if you want to join Squad Plus.’ I was like, ‘Oh, is this real? Okay, sure,’” she revealed during the online press conference for the launch of the group on Monday, April 19.

There are several reasons why Cruz is excited over her inclusion in the group of singers. One is because she’d be able to actually work while being a part-time student.

“I just want to meet a lot of new people, have new experiences and learn a lot of things while doing this. Until now, I’m so grateful for it,” she said.

Working and at the same time studying is easier for Cruz even during the pandemic because classes are conducted online.

“It is easier to balance both work and school. What I do is I schedule it properly po. I take note of what time my classes start and what time I have work to really balance it,” she shared. Pero kung sabay po ang (But if it is simultaneous) work and school, I just take time to make up for what I miss.”

On the issue of her being a child of celebrities, not to mention that the Cruz clan is known to produce stellar singers, she finds having a popular surname as both an advantage and disadvantage.

“It is an advantage because I get to be in a lot of amazing projects and have like a headstart. I feel like it could also be a disadvantage because everyone will be having their eyes on you and they might compare me po to my parents. And I have two other siblings. They might also compare me to them,” said the aspiring young singer. “I just have to know how to deal with it po.”

Cruz was also asked how she deals with bashers, something that comes with the territory of being a celebrity.

“For the bashers who tend to judge me and my sisters, I just use it as something to motivate me to be even better, to be my own self,” she answered.

On her free time, Cruz bakes and cooks. It is something that her family appreciates as they even tell her what dishes to cook.

Cruz has also performed in “ASAP Natin ‘To” and appeared in the iWantTFC original series “Unloving U.” JB