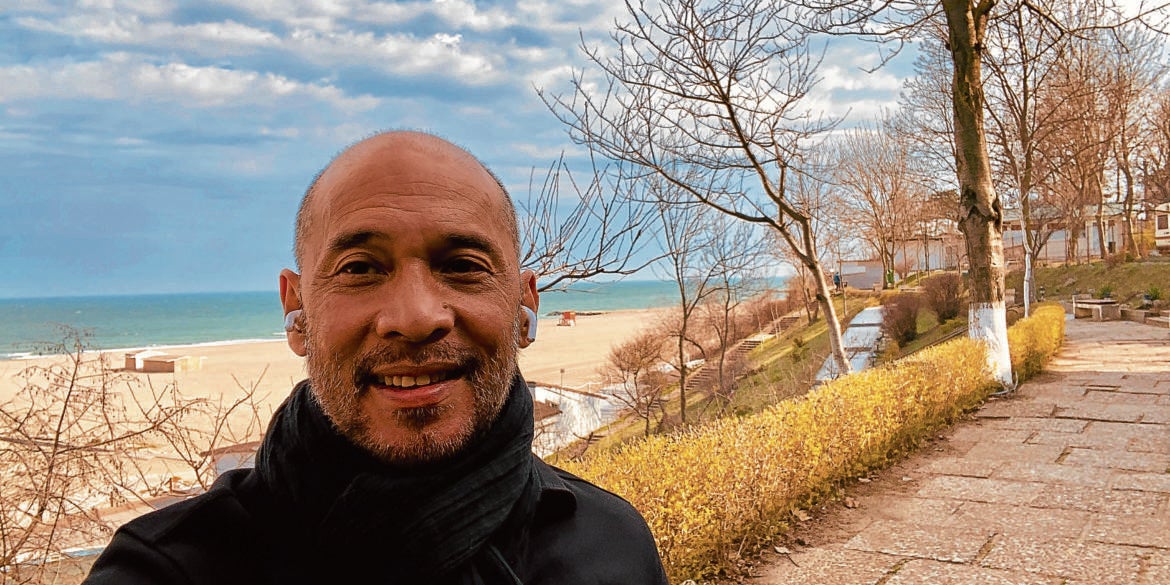 Bart Guingona against the Black Sea in Romania: His baking operations are on pause until he finishes filming in June.

‘I miss the discipline of directing and acting. In baking, you use the same discipline and creativity’

Over a video call, actor-director Bart Guingona sat by the window of his room overlooking the Black Sea in Constanţa, the port city of Romania, where he was filming “To the North,” a movie about a religious Filipino seaman who encounters a Romanian stowaway on a ship. Guingona plays a significant role as a Filipino sailor. In 2017, Romanian writer-director Mihai Minkan had seen one of Guingona’s movies in an international festival and broached the film project. However, the project was delayed for a few years.

During the general community quarantine, Guingona was able to do two teleseryes, produced in a bubble environment. When the Romanian production was ready to take off, he left on March 21 for location shooting.

“The theater may be closed now, but I’ve been lucky. Suddenly, my acting career got resurrected,” he said.

While he’s working abroad till June, his baking “operation” remains suspended. On his return, he’ll be back in the kitchen, packing keto desserts in boxes with stickers “Baked by Bart.”

Like many people during the long lockdown, Guingona turned to baking to bide his time. “I’ve always liked sweets but I’m wary of sugar. It stays in your belly,” he said with a chuckle.

He favored a ketogenic diet, the low-carb, high-fat and high-protein program which puts the body in a state where it has less carbohydrates and burns the stored fat for energy.

Since he was a subscriber to the “Ketoserts” YouTube channel, he started exploring recipes and tweaking them, particularly the proportion of natural sugar substitutes.

Guingona’s first attempt was a strawberry cheesecake which he found unexciting. He then experimented with chocolate glaçage (mirror glaze) as a topping. “Chocolate and strawberries are great complements. Instead of the usual graham cracker crust, I substituted with almond flour, cocoa, butter and salt to make it ketogenic,” he said. The final product looked like a pink cloud sandwiched between two chocolate layers.

Like most people who turned to baking to soothe their anxiety, Guingona found the process therapeutic yet exacting. “It kept me from going crazy. The mise en place (gathering of ingredients and utensils) has to be organized. You can’t put the eggs before the (keto-friendly) flour. It’s very disciplined. I likewise miss the discipline of directing and acting. In baking, you use the same discipline and creativity,” he explained. The flops were offered to his neighbors. “I explain to them that it’s an experiment. ‘Tell me how it tastes, not how it looks.’”

Guingona had no plans of selling his keto desserts. His reputation as an actor got people curious about his baking skills. His first order was a strawberry cheesecake which turned soggy when the customer received it. Politely, the friend said, “It’s good except that it became an ice cream when it arrived here.” He had since been freezing the cheesecakes before sending them out.

The chocolate coconut bounties, coconut wrapped in dark chocolate, were easy to transport. Last Christmas season, Guingona was swamped with orders. “I’d wake up and see this list. Oh my god! I have to bake strawberry shortcake, cheesecake and a bunch of candies! It was too hard to work by myself,” he said.

A box of butterscotch kisses, marshmallows covered with caramel, was the most requested. “You start the day cooking the caramel, coating each confection and wrapping them individually. I nearly swore off this recipe last Christmas,” he said.

He finally created a system and told customers that the keto desserts would be delivered on certain days. People have been teasing him and calling him, “Hey, it’s Bart the Baker.”

Guingona’s favorite recipe is the strawberry shortcake, vanilla-fragrant, buttery and spongy layers shrouded with a thick cloud of creamy icing and giant strawberries. He is also proud of the apple membrillo (fruit paste) tart which has the balance of crispness, subtle sweetness and tartness.

The actor said he may have lost an audience in the theater, but he gained Instagram followers—and customers. “People were still messaging me for orders before I left. I answered, ‘Until I get back in June.’”

For the coconut filling:

½ c granulated xylitol (erythritol is good, too, but has a stronger aftertaste)

½ c sugar-free chocolate (I used 85-percent Malagos dark chocolate ordered online. You can go more or less bitter depending on your taste.)

For the coconut filling:

Line an 8” x 8” baking pan with baking paper. Make sure to cut the baking paper long enough to overhang two sides of the pan.Put cream in a small pot over low heat.

When it starts to gently bubble, add sweetener (granulated xylitol or erythritol).

Once the mixture is bubbling gently and sweetener and salt are dissolved, pour it over the bowl of desiccated coconut. Mix it thoroughly.

Empty the bowl’s contents onto the baking paper-lined pan. Flatten evenly throughout pan.

Refrigerate, or better yet, freeze until hard enough to cut into even bars (16 bars or 32 small squares)

For the chocolate coating:

Crack the chocolate into shards into a bowl.

When sweetener has melted, pour over cracked chocolate and stir until chocolate has fully integrated with the cream.

Lay a large piece of parchment or baking paper on a tray.

Cut the frozen coconut into rectangles or squares.

Using two forks, gently dip each piece of coconut into the chocolate and lay in a row over the parchment paper. (You need to work quickly because the warm chocolate will melt the coconut bars.)

Refrigerate the tray for an hour or more.

The bounties are ready once the chocolate coating has set.—CONTRIBUTED INQ