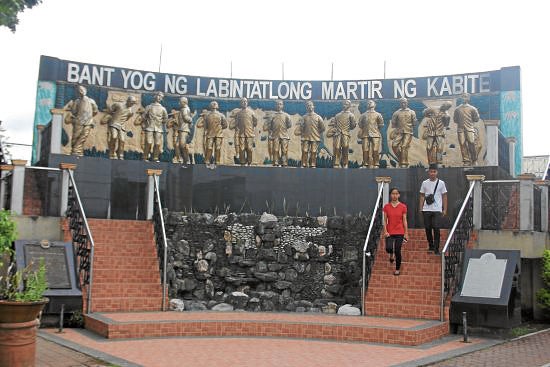 Monument to the 13 martyrs of Cavite

Cavite City’s heroes, artists and Our Lady of Solitude

In August 1896, tension was rife in the capital of Manila and in Cavite province. Meeting with other Katipuneros, Aguinaldo unveiled a plan to attack the Spanish arsenal in Fort San Felipe, Cavite City, then the provincial capital, with the help of Severino Lapidario, warden of the provincial jail. The signal was to be fireworks from the warehouse owned by Maximo Inocencio, a wealthy businessman.

Aguinaldo was in touch with Bonifacio, whose forces attacked the Spanish powder magazine in San Juan on Aug. 30; the following day, the Spanish authorities declared martial law in Manila and seven surrounding provinces. By that time, the plot in Cavite City had been exposed, by a dressmaker at that, and Lapidario and two others—Luis Aguado and Alfonso de Ocampo—were arrested.

Dozens of prominent Cavite men were also rounded up and incarcerated, although some were later released. Under torture, De Ocampo revealed the names of his 12 other companions. On Sept. 11, the 13, following a four-hour trial, were found guilty of treason and sentenced to death. They were executed by musketry the following day in Plaza de las Armas outside Fort San Felipe.

The 13 martyrs are Aguado (a Chinese mestizo said to be the richest man in Cavite), Eugenio Cabezas (goldsmith and owner of a jewelry-watch repair shop), Feliciano Cabuco (born to a wealthy family, worked in a hospital), Agapito Conchu (schoolteacher), De Ocampo (a Spanish mestizo, assistant provincial jail warden), Maximo Gregorio (chief clerk of the Commissary of War), Inocencio (a wealthy businessman), Jose Lallana (a tailor whose shop was used by the Katipunan as a meeting place), Lapidario (warden of the provincial jail), Victoriano Luciano III (a pharmacist recognized for his formulas of rare perfumes and lotions), Francisco Osorio (scion of a wealthy family), Hugo Perez (a physician) and Antonio San Agustin (another scion of a wealthy family).

San Agustin was an uncle of my mother, Estrella San Agustin de Guerrero, from Cavite City.

A monument to the 13 heroes was erected in San Roque, Cavite City, in 1906. In their honor, the new provincial capital city was named Trece Martires in 1954. And in 2004, a new monument to them was unveiled in the city in 2004.

Among those earlier rounded up for involvement in the Cavite conspiracy was music teacher and composer Julian Felipe, who would gain fame for his “Marcha Nacional Filipina,” which would later be the national anthem. He was incarcerated for nine months in Fort San Felipe.

Felipe was born in Cavite City on Jan. 28, 1861. He studied in a public school in the town (now a city) and later in Binondo, Manila. He learned how to play the piano and organ, and became the organist of St. Peter’s Parish Church and was soon composing songs. These included “Reina de Cavite,” a tribute to Our Lady of Porta Vaga.

Upon his release, Felipe joined the forces of Aguinaldo, and composed patriotic songs, which heightened revolutionary fervor among the troops.

His moment of glory came when Aguinaldo asked him to compose a hymn for the declaration of Philippine independence on June 12, 1898, in Kawit. Felipe responded with “Marcha Nacional Filipina,” later known as “Lupang Hinirang,” which became the national anthem in 1938.

Felipe lived a long and productive life, and received many honors. He died on Oct. 2, 1944, in Sampaloc, Manila. A bust of the composer-hero stands near San Sebastian College-Recoletos de Cavite, Cavite City.

Of the city’s prominent artists in music and other art forms, Fr. Virgilio S. Mendoza, parish priest and local historian, has observed: “We have five opera singers, composers, poets, painters, historians, heroes, instrumentalists, like Antonio Maigue and many more.”

Include here Conchu, one of the martyrs, who was also a musician, photographer, painter and lithographer. He was originally from Binondo, Manila, but moved to Cavite, Cavite.

Flutist Maigue, a product of the University of the Phillipines College of Music, honed his talent for one year in Paris under the tutelage of the master Jean Pierre Rampal, and won high honors in National Conservatory of Paris.

Returning to the Philippines in the 1980s, he soon embarked on a successful series of concerts in Manila and outreach areas. He has performed flute concertos often with Philippine Philharmonic Orchestra, a resident company of the Cultural Center of the Philippines (CCP).

With the Outreach Program of the CCP, Maigue has held concerts from north to south, from Isabela province to Zamboanga City, and in key Visayan cities. He has performed in Malaysia, Beijing, Japan, New York and the United Kingdom. Credits include performing under the baton of the late, great conductor Leonard Bernstein and being lead flutist in the Philippine and Malaysian concerts of tenor Luciano Pavarotti, no less.

Since earlier times in Catholic Philippines, Maria Santissima, La Virgen de la Soledad or Our Lady of Solitude, has had a cult following in the settlement that would become Cavite town and then city. The original image was carved by Spanish sculptor Gaspar Becerra during the 16th century and presented to Our Lady of Victory convent in Madrid; it was meant to commemorate the Blessed Mother’s solitude during Holy Saturday.

Soon this form of Marian devotion spread to other parts of Spain, Portugal, Mexico and the Philippines, particularly in Cavite City and Nueva Ecija province. After 500 years, Our Lady of Solitude remains the patroness of Cavite City, and until the pandemic struck there were annual feasts in her honor.

“Five Hundred Years the flower and fruit,” to paraphrase the poet Nick Joaquin when he wrote about another city, his beloved Manila. —CONTRIBUTED