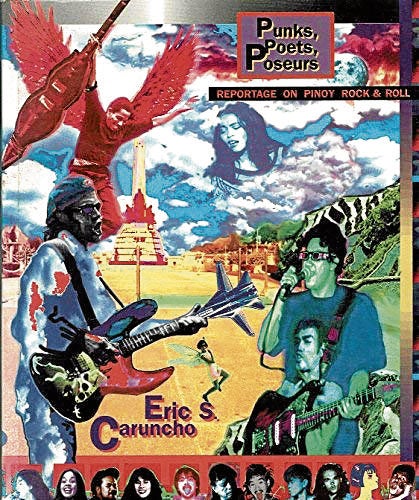 Reportage on the less-traveled pathways of Pinoy culture

As our rock ’n’ rolla culture chronicler retires from full-time journalism, he looks back at what a long, strange journey it’s been

I call them my “How did I get here?” moments, after the line in the Talking Heads song—those odd moments of mild cognitive dissonance when you catch yourself in the midst of the daily grind and ask yourself: “Why am I doing this?”

In this case it was in Boracay in the mid-’90s.

I was covering some kind of half-assed arts festival, with the highlight being BenCab (several years away from becoming National Artist) judging a painting contest.

Also on the bill was pre-Radioactive Sago Lourd de Veyra reading his beat poetry to a prerecorded bebop accompaniment, and for some unfathomable reason, the actor Jao Mapa, of “Gwapings” semifame.

A press junket, in short.

The “headliner”—a third-string “alternative” rock band called Bad Days for Mary—were doing their sound check on a makeshift stage. The female-fronted band aspired to some kind of Color It Red pop-rock appeal, but they still had some ways to go. Short on originals, they padded their set with new wave covers such as The Flirts’ “Jukebox (Don’t Put Another Dime).”

This kind of set the frankly depressing tone for the whole event. Anywhere else but Boracay, and you wouldn’t be caught dead in it.Anyway, Bad Days for Mary was mid-sound check on the cheap, rental sound system when a gaggle of locals set up across from them, sitting cross-legged on the sand with an acoustic guitar, and defiantly launched into an earnest, deadly serious, in fact, rendition of Rainbow’s “Temple of the King.”

Here, in capsule, was the great Philippine urban-rural cultural gulf itself, or so I thought.

Now, how to write about it?

That had been my basic modus operandi since joining the Sunday Inquirer Magazine as a staff writer in 1991: Find some obscure corner where a new and exciting wrinkle in the ever-evolving stew that was Pinoy culture was fermenting, and expound upon it in print.

I had sort of stumbled upon this methodology when I embarked, somewhat belatedly, on a journalism career after the press reopened post-Edsa 1986.

Most newspapers are divided into “hard” and “soft” sections.

The “hard” side consisted of news on current events, politics, business and the economy, natural and man-made disasters, crime, corruption, death and all the other calamities of daily life. You can now add “plague” to that list.

In short, stuff you needed to know about.

The “soft” side consisted of entertainment, lifestyle, arts and culture: the glamorous lives of celebrities and your social betters, music and fashion, show business and high society, fashion and food trends and, in small doses, the ponderous intellectual output of various deep thinkers and the artistic avant-garde.

Stuff you may not need to, but wanted to know about anyway.

Serious journalists, usually from the “hard” sections, tended to look at “soft” stories as remedial boilerplate: necessary to calm you down, cheer you up and keep you from plunging into the depths of despair after reading the chronicle of human greed, ineptitude and sheer folly that is more often than not what makes up the news.

Those of us who worked the “soft” side, however, knew that what we wrote about was, at the end of the day, the stuff that people actually cared about: the clothes, culinary preferences, choices in entertainment, edification, personal habits and daily practices that combined into their individual personal styles of living—i.e., lifestyle.

In addition, given our consumer desire-driven economy, the “soft” sections also drew a large chunk of a newspaper’s advertising revenue.

I was always a “differently abled” reporter.

Although I graduated with a journalism degree, it was during the “crony press” era, when media was strictly controlled by the martial law regime.

I took a detour through various government and semigovernment agencies, and as a result never went through the apprenticeship as a beat reporter that most journalists start their careers with.

My first newspaper job was as a staff writer for the “features” section of one of the newspapers that had reopened after Edsa 1986. The job entailed generating the usual human interest stories, personality profiles, goings-on in the art and culture world, as well as a more in-depth treatment of newsmakers than the more rigorous standards of the news section usually allowed.

Thanks to a short but illuminating stint as a contributor to Jingle magazine, however, I already had a more idiosyncratic view of what constituted “arts and culture” than what the official doyens of culture and the arts gave their imprimatur to.Going by the dictionary definition, culture was either “

1. the arts and other manifestations of human intellectual achievement regarded collectively, or 2. the customs, arts, social institutions and achievements of a particular nation, people, or other social group.”

What was more relevant, I asked—“Turandot” at the Cultural Center of the Philippines or Cocojam playing reggae at a hole-in-the-wall dive bar called Mayric’s in España?

Both seemed equally valid, except what most people considered “culture” was basically dead, while the other kind of “culture” was alive and just exploding in pockets everywhere.

One of my first features was an in-depth look into the festering hardcore punk subculture that was still going strong in certain enclaves in Manila and suburbs, years after the rest of the world had moved on to postpunk.

This was about as far from the mainstream as one could be in 1987, but after 14 years of repression under martial law, Pinoy culture was blossoming in new and unexpected ways, and there was room for even the likes of George Imbecile and the Idiots, the Dead Ends and the Philippine Violators.

The story gained even more traction the following year when hardcore punks were equated with Satanists by certain suggestible members of the clergy. It picked up steam in the tabloids, and predictably politicians got into the act demanding congressional investigations into such questionable phenomena as “backward masking.”

At the same time, the dividing line between “high” and “low” culture was being eroded away with the advent of postmodernist ideas in the local art scene.

There was also a changing of the guard, as the former activists and bohemians of the baby boom generation aged out, giving way to subsequent generations of movers and shakers, from the Yuppies, to the Gen Xers, to millennials and beyond, each transition marked by corresponding cultural shifts.

Exciting times, to be sure.

The trick, from my standpoint as a feature writer, was to be able to provide detail, context and a sense of the larger societal implications beyond the usual “trend” piece.

For instance, it seemed a moment of epochal significance to me when activists started dancing in the streets to the reggae-influenced riddims of Buklod’s “Tumindig Ka.” In my day, rock and roll was considered “bourgeois” and an artifact of Western imperialism. Folk music was the only form considered suitable for patriotic message songs of resistance and revolt.

Clearly, times had changed as the progressive movement began to intersect with the underground rock scene, resulting in such compilations of new protest music as “Dear Cory” and “Karapatang Pantao” in the late 1980s-early 1990s.

A lot of the seismic shifts in the culture seemed to be happening in the music scene, such as the emergence of music that sought to incorporate indigenous Filipino musical forms and instruments, such as Kontra-Gapi, Joey Ayala, Grace Nono and their successors.

The left-field popularity of the Eraserheads opened up a breach for rock bands that had until then languished in the underground. Within a few years, they had toppled the so-called “show bands” that had ruled the roost until then, and become the mainstream.

There seemed no better time to compile my rock reportage to that point, the result of which was “Punks, Poets, Poseurs: Reportage on Pinoy Rock & Roll” (Anvil Press, 1996), as far as I know the first book-length survey of the local music scene.

With rock gone mainstream, a new underground emerged centering around the new, constantly mutating electronic dance music: techno, house, trance, drum-’n’-bass. Even in the absence of actual clubs, a “club culture” emerged, MDMA became a popular party favor, and rival cliques Groove Nation and the Brady Bunch vied for superiority like the Jets and the Sharks in “West Side Story.”

All of this merited scrupulous coverage by the resident oddball, and it was all I could do to keep up.

The primacy of the internet and social media, eclipsing “traditional” media such as print as the primary means of information sharing, has posed a challenge. For one, the kind of reportage I used to do—digging up new and evolving microtrends, such as body art, fixed-gear cycling, the rise of custom motorcycle culture, is now being done routinely by blogs, vlogs and individual social media pages almost instantaneously.

At the end of the day, however, it still boils down to words and pictures: Old-school reporters such as myself still have a trick or two up our sleeves, and the long-form article remains the medium of choice for expounding on What It All Means.

In a surprising turn, visual arts have regained the kind of status once claimed by alternative rock. As art prices skyrocketed to unheard-of heights, fueled by well-heeled collectors and art speculators, visual artists have become the new rock stars.

Strangely enough, the current crop of art stars, among them Elmer Borlongan, Manuel Ocampo and Romeo Lee, have roots that go back to the early days of the punk scene.

What goes around, comes around.

See you down the road.