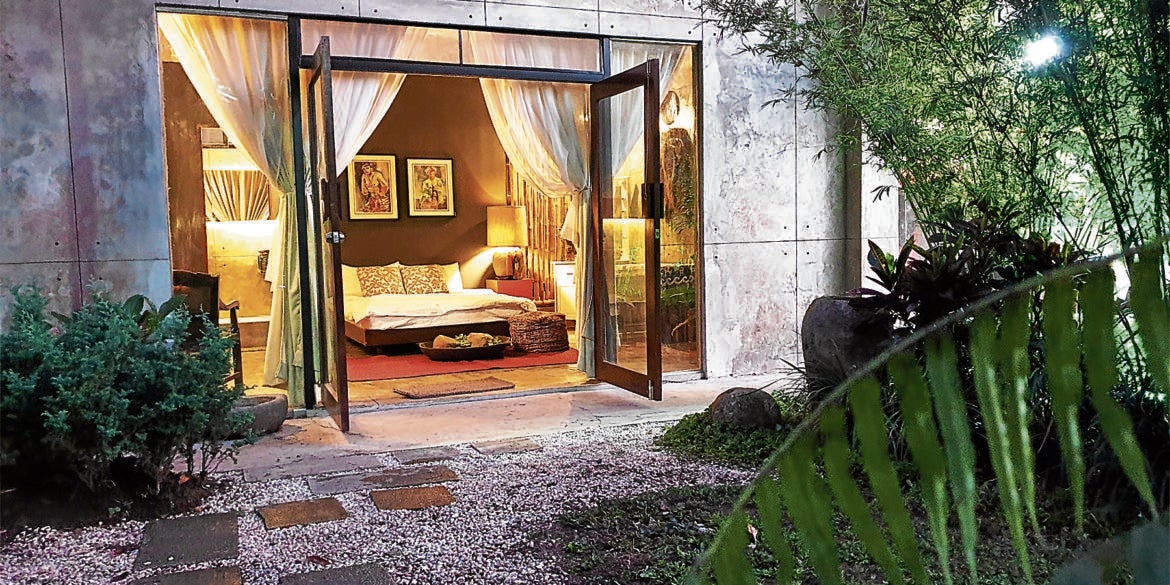 The rough finishes on the facade are part of the aesthetics of “wabi-sabi,” or beauty in imperfection.

It not only counteracts the damaging effects of construction on the environment, but actually provides a positive impact

Weary of the decaying city life, architect and environment planner Ronnie Yumang and his family moved to an idyllic place in Alfonso, Cavite. In 2019, they acquired a 2-hectare forested area in Barangay Sulsugin, which had an abandoned poultry storage and barracks.

Yumang is a proponent of regenerative architecture, which not only counteracts the damaging effects of construction on the environment, but actually provides a positive impact on the place. A regenerative design construct with materials that offset carbon, uses the site to create a home ground for species and restores the lost diversity of plants and animals.

The architect named the place Maka Forest Villas, with the vision of building a community whose lifestyle is intertwined with the ecosystem. Maka is an ancient Tagalog word for “a place where good spirits live” or “heaven on earth.”

“It is a haven for both man and other species thriving on ecocentric living that will start healing our relationship with nature,” he said.

Yumang planted endangered native trees, such as the katmon, pili and other hardwoods, and nurtured the existing trees and plants. Bird watchers could enjoy the sighting of blue collared kingfishers and the yellow orioles that eat the native berries or encircle the dadap (Indian coral tree). At night, the cooing native owls and the swirling fireflies enchant the place.

The abundant clay on the site has become the main material for the mud pond, earthen cooker and building blocks for the dining room flooring. Yumang mixed the white clay with termite mound soil and some cement binder for the pond. Eventually, it drew dragonflies and damselflies.

The 1,000-square-meter poultry structure was repurposed into three adjoining villas for the family, visitors and a common area. “The disturbance on the soil is minimized,” he said.

Three bed-and-breakfast rooms with their own bathrooms are connected to a lanai. “The guest rooms are attached to pocket gardens for a meditative atmosphere. We wanted to offer a tranquil area where visitors can reconnect with themselves. They hear the songs of the birds, the trickle of water and the rustle of the leaves. You won’t find those in hotels,” explained Yumang.

The open-air dining area is protected by folding bamboo shades during rainy weather.

The architect eschewed conventional building materials, such as concrete, gravel and sand, which are nonrenewable resources. Alternatively, woods from the forest and architectural salvages from ancestral homes were used. The abundant clay was the main ingredient for the earthen flooring in some parts of the house.

“It is better to use materials from the site that regenerate instead of those that are quarried,” he said.

The original raw concrete finishes of the facade and the sidings were maintained. Instead of painting the walls, lines were etched to add visual interest. The flaws and uneven surface of the colonnade were exposed and became part of the aesthetics.

“When it rains, washed-out paint will drip into the soil. I keep in the nutrients in the soil by leaving the surfaces untouched,” he said.

In the bathrooms, a wooden deck in the shower area, pebbles from the creek and bamboo partitions lend natural charm with a rough edge. The accent piece is a Corten steel lavatory recycled from Yumang’s other projects. Corten is a brand of steel that is made to look weathered.

Except for the dining area, the original concrete flooring was preserved and polished. Tanlak (narrow native bamboo) blinds became rustic window ceiling treatments. Bamboo from the site was made into partitions and decorative statements. Paint was only used to accent one wall in all the bedrooms. The place is comfortably furnished with family heirlooms, paintings and mementos from travels, such as the vakul, the palm-fiber headgear from Batanes. The antipolo dining table, left with craggy edges, sits on upcycled steel bars.

“In a regenerative house, you can have more space to grow food. Less processed and quarried materials mean lesser habitat destruction,” said Yumang.

Maka’s old poultry farm structures were remodeled on a low budget but in a creative way that espouses beauty in imperfection. The result is a comfortable house with a revenue-generating section.

“Maka has to earn to sustain our advocacy of spreading the wisdom of regenerative thinking,” he said. —CONTRIBUTED