This mom went to school with her kids — literally | Inquirer Lifestyle ❮ ❯ 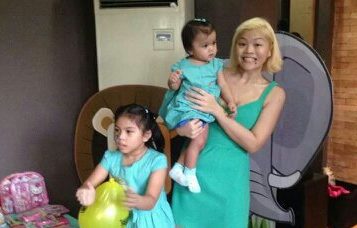 This mom went to school with her kids — literally

Back when in-person classes were still a thing, a common routine among parents was to wake up early every morning to bring their kids to school before getting started with work or tasks at hand. This was true in the case of mother Xylena Rivera, except that unlike other mothers, she also went to school along with her children.

Xylena, at age 28, went back to school 11 years after dropping out because she became pregnant with her eldest daughter in 2005.

She was a 17-year-old Communication Arts student in a Quezon City school for girls, a transferee from a university in Manila, with her passion for dancing taking precedence over her education back then.

“Hindi ko trip, eh,” Xylena narrated to this reporter. “It wasn’t my choice to study there. So parang ako, ‘I don’t care.’ So parang di ako nagpapapasok.”

“Ever since I was young, I was always passionate with dancing, so I pursued that,” she recalled.

Through her passion, she met her first daughter’s father, and said it wasn’t long before she became pregnant with her first child.

Her parents, who had marital problems of their own, had mixed reactions to her pregnancy.

Her father was “happy and at the same time disappointed,” while mother “couldn’t say much” since she was way younger than Rivera when she had her.

“I had to stop (school). I mean, it’s not like I really stopped school because to begin with, when I was transferred, I wasn’t honestly going to school na rin naman. I was only spending my hours during the day training in dance studios,” she said.

Xylena, then just 18, gave birth to her first daughter in 2006. She would latter admit that she wasn’t quite ready for what motherhood entailed, leaving her mother and yaya to care for her daughter.

(Basically, I still had the mindset of a youth, so I didn’t know anything but have a good time and dance.)

Xylena and her partner eventually split up five years after the birth of their daughter.

In 2013, she gave birth again to another baby girl whose father was a man she met in Baguio after a little excursion she took following her previous break-up. The relationship did not last long either, but by that time Rivera said she was also “emotionally stable” to the point that she “didn’t need a man.”

Her second pregnancy became a wake-up call for her to shape up as a mother, Xylena said, as she began being more responsible with her children’s needs.

“To be honest, parang naging wake-up call sa’kin ‘yung pagkakaroon ng pangalawa. I guess it came with the maturity rin,” she said, adding: “Naisip ko na I have to get a lot of my crap together, so inalagaan ko hands-on, as in ako ‘yung naghuhugas ng bote, pawisan lagi, takbo dito, takbo don, asikaso sa panganay.”

(To be honest, having a second child became a wake-up call to me. I guess it came with maturity. I thought I had to get a lot of my crap together so I became hands-on. I cleaned the feeding bottles, get sweaty rushing from one place to another, took care of my eldest.)

At this point, the yearning for learning took hold of her. She knew she had to go back to school to be able to fully support her daughters. She had the yearning to become a better version of herself for them.

The plan wasn’t that simple, she further realized. Not with 11 idle years after dropping out of college.

On top of her mothering duties to two growing kids, Rivera persevered to prepare her school documents to pave the way for her return to schooling. In 2016, with a 10 year old gradeschooler, and a three-year-old preschooler in tow, she finally summoned the nerve to go back to school — the same institution she had turned her back on 11 years ago, the same school her daughters were attending. All of a sudden, she was the same college girl, only with a different perspective.

“When I was younger, education was nothing but a burden. But when I got older, I really wanted to go (back to school), it’s simply because I wanted to learn new things,” she surmised.

Her family supported her decision. Thankfully, her father agreed to assist her financially. She also shelved her initial decision to live in a dorm and leave the children to the care of her father, who was separated from her mother.

(Every day we would go to school together, and then wait for each other to go home.)

This set-up, she believed, brought them closer together as a family.

“Mas nagkaroon kami ng dynamic na they can laugh with me even if I am their mom,” she said. “I think na-develop lalo ‘yung friendship factor, because para sa’kin it’s an important thing whether nanay-daughter, may friendship pa rin dapat lagi. That’s one thing I value.”

(We established a dynamic where they can laugh with me even if I am their mom. I think the friendship factor developed, because for me it is an important thing for mothers and daughters. It’s always friendship. That’s one thing I value.)

Xylena cherished her little close-nit family — sharing relationship issues with her eldest, even details about the kids’ respective fathers.

“Transparent ako,” she said about the kids’ fathers. “Kapag may questions sila separately (about their fathers), I definitely answer both of them, minsan ako nage-engage.”

(I am transparent. When they have questions (about their fathers), I answer them, at times I begin the conversation about it.)

In 2020, Xylena graduated with a diploma in Psychology, but the graduation took place only virtually with the outbreak of the COVID-19 pandemic and subsequent imposition of government restrictions.

“Sobrang devastating,” she said of the situation. “Because my main reason why I wanted to go back to school and to graduate is to make my kids proud.”

Xylena, now 33, is still navigating her relationship with her daughters, now aged, 14 and 7, but said she wants to have a close relation with them as she had not had that with her own mother.

(I want them to remember that I am not just their mother. If they want a playmate, I can be their playmate. If they want someone to chat with, I can talk to them.)

With a wisdom borne of her own struggles and failures, she acknowledged that finishing her education was a “rare” opportunity given to her. She was grateful to her father for giving her the push and the financial backing that she needed to restart, but ultimately, this college dropout’s innate desire to inspire her children made her want to get back on track where she left off before she became a mother.