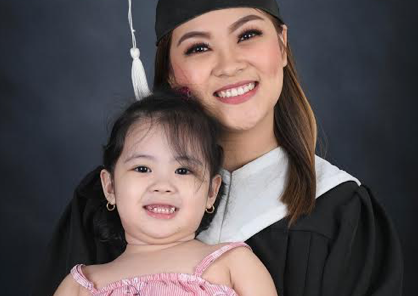 Rose and her daughter Potchay during her graduation.

Rose May Pimentel was just a typical student at a state university, except that apart from her school bag, she would also be seen lugging around a baby girl and another bag containing a pack of diapers and feeding bottles. She was a regular sight negotiating the stairs at the LRT-Pureza Station then snaking her way to school in Sta. Mesa, Manila.

This had been her typical commute, after giving birth to daughter Louisse at 18. “I would bring her with me to school because no one was available to take care of her,” she said.

Rose and her baby, who she nicknamed “Potchay,” were a prominent fixture in the classroom at her college where she took up a degree in Journalism. Her child would sit beside her during classes, tending to the needs of the infant while attempting to focus on lectures.

“She would always sit in my lap while I’m taking notes,” she recalled.

“She would always sit in my lap while I’m taking notes,” she recalled.

Her uneasy pregnancy apparently would only serve as a prelude to her difficult, sometimes exhausting task ahead. She wanted to finish school, but at the same time, she wanted to take care of her daughter.

“I had to deal with morning sickness, attend doctor’s appointments, and all the other issues that come along with pregnancy — all while carrying a full [academic] load,” she said.

There was also a pressure for her to finish school, to be the first in her family to earn a college degree.

“When I found out [about my pregnancy], it was not great. At first, I was like ‘what I am I going to do now?’ I felt kind of hopeless. I was scared I would be judged a lot, and I was scared to tell my father,” she said. “I wasn’t sure if I could still achieve my dreams. I don’t know if I could still go to school. But my father said I should.”

So went to school, she did, even if it meant commuting in the cramped LRT with her daughter and taking that long walk to the university.

There were also times when the sweltering heat in the classroom and boredom would prove to be too much for the child.

“Sometimes, she wants to go home early because she’s tired and the room is hot,” she recalled. “One time when I was doing a presentation in class, I left her on my seat, then asked my classmate to look out for her. But she wanted to be with me so she went to the front of the class. She was there the whole time I was reporting.”

Tears, lack of sleep, and endless hours of studying dotted her months of pregnancy. “I had to manage late nights of studying on top of my parenting duties,” she lamented. On this last, she acknowledged the help of her partner and father of her baby.

“We take turns in taking care of our child. When I have classes and he’s free, he takes care of the child, and vice versa.”

Despite challenges, she finally got a Journalism degree in September last year.

“I wanted to make my daughter proud and I wanted to set an example for her. I had to finish school for her,” Rose said.

Aside from her partner, she said this milestone would not be possible if it were not for the help of her partner and the people around her.

“There are a few people around me that have helped make me from a teen mom to a college graduate possible, thanks to my supportive partner, family, friends, professors and classmates,” she said.

Right after graduation, Rose worked nights as a call center agent at home during the pandemic, while being a full time mom to her now four-year-old daughter.

(When she is troublesome, I would mute the call to reprimand her, while listening to the customer.)

After her night shift, she would sometimes still have to take care of her daughter before going to sleep.

“I’ve once read that teenage pregnancy is the process of ‘babies raising babies,’” she said, noting all the struggles she had been through while studying and mothering at the same time. But looking at her baby’s milestone made her proud and made all struggles worthwhile.

“Being a teenage mother is a very rigorous task. It’s one of the hardest yet most rewarding jobs there is,” she claimed.

“Being a teenage mother is a very rigorous task. It’s one of the hardest yet most rewarding jobs there is,” she claimed.

This would be Rose’s mantra whenever she is feeling the dumps. She said that other mothers similarly situation could learn from her experience.

“I was on the verge of breaking down because I was having a hard time. But I knew I have to fight and sacrifice for her,” she said.

She also encouraged teen moms to seek help from friends and family.

“It’s okay to admit you don’t know something and ask questions or get help,” she said. “There’s no reason to do it all on your own.”

She also reminded teenage mothers to put themselves and their children first before anything else.

Lastly, she encouraged teen moms to never stop dreaming. After all, just because a teen got knocked up doesn’t mean it’s the end of their dreams.

“Start working towards your dreams and don’t be afraid to fall. Don’t let your current situation determine your future circumstances,” she said. “It may seem impossible now but it will be all worth it.”