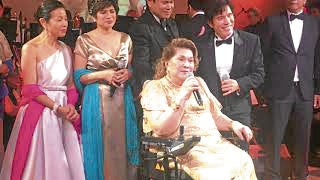 At the launch of Celia Diaz Laurel’s previous book, “The Colors of My Life.” FILE PHOTO

Actress Celia Diaz Laurel, wife of the late Vice President Doy Laurel, mother of musical star Cocoy Laurel and long a mainstay of Repertory Philippines (Rep), is turning 93 on May 29. And she is celebrating the milestone in style, by launching a new book, “My Lives Behind the Proscenium.”

The foreword is by Rep colleague Joy Virata, who wrote that “she never seemed to be flustered no matter that she was doing 10 things at the same time for Rep … and could keep calm in the often stormy atmosphere of a theater company with a stormy leader.”

In her biography “My Life in Theater,” the late actress-director Naty Crame Rogers recalled that during their student days at the University of the Philippines (UP) “Celia Diaz [was] being squired around by Doy Laurel.”

They were married in 1950, and in 1952 they left for their Master’s degree in Yale University. But we are getting ahead of our story.

Celia Diaz (later Laurel) was born in Talisay, Negros Occidental, in 1928, youngest of six children born to Anselmo Sison Diaz (of A.S Diaz Electric Co.) and Concepcion Gonzalez Franco. When Celia was 5, the family moved to Manila, and the child was enrolled at Assumption Convent, then in Ermita, Manila.

A low wall separated the elite girl’s school from the Jesuit-run Ateneo de Manila. Decades later, during one of our reunions, my classmates would recall that, when they were playing basketball, the ball would sometimes sail over the wall and land in the flower bed of the neighboring school, to the great annoyance of the nuns.

It was at Assumption that the world of theater first beckoned to little Celia. She enjoyed the veladas, the elaborate musical programs given by the “old girls” or the school alumnae, although she did not understand these as the language was English, and she spoke only Hiligaynon and Spanish.

The next important chapter in her life came at UP, when playwright-director Wilfrido Ma. Guerrero (later a National Artist) asked the 19-year-old Celia (who was actually enrolled in Fine Arts) to play Tia Consuelo in his play “Forever.” The actress who was to play the role had backed out, and it was going to be staged the following day!

This meant that she had to memorize long lines and morph into a 60-year-old woman in 24 hours. Diaz was appalled, but Guerrero was desperate. If she didn’t agree to play the role, he would have to cancel the play. And so the neophyte actress gave in, and what do you know—she actually triumphed in the role. This and other important parts in Guerrero plays paved the way for a plum role in Federico Garcia Lorca’s “The House of Bernarda Alba,” a 1950 production of Manila Community Players headed by Doña Trining Legarda.

Lorca’s tragic play is about an all-woman household headed by a tyrannical widow with four repressed daughters. The inexperienced Diaz was to play the willful daughter Adela who, in a key scene, had just come from a barn where she had a tryst with the betrothed of one of her sisters. So during rehearsals, she went through the scene and was stopped cold by the director, Sonia Rifkin, who had directed the play in Los Angeles.

“Show us that you have just come from the barn,” Rifkin demanded. So our heroine went backstage and placed some straw on her petticoat. When she emerged, peals of laughter from cast and crew greeted her. But the director was not amused. “Show her what happens in a barn,” she demanded of the cast. Nobody dared, and the rehearsals ended that day in an impasse.

Luckily, the following day young Diaz, with a brother, saw the movie “Blood and Sand,” with Rita Hayworth playing a sexy temptress with fiery eyes, bosom thrust, tempting lips and swinging hips. So that became the young stage actress’ role model. And this time, the director was pleased and the rehearsals proceeded smoothly.

The production’s problems were not over, however. The Spanish rector of the University of Santo Tomas (UST) declared the play “immoral” and refused permission to stage the play in UST’s Conservatory of Music hall. There was even talk that the play was banned by the Spanish minister because Lorca, who had been assassinated by Generalissimo Franco partisans, supported the violently anti-Catholic Republicans during the Spanish Civil War. The Spanish minister hotly denied this.

Legarda, the play’s producer, then appealed to President Elpidio Quirino, who ordered a command performance of the play in Malacañang Palace, which was well covered by the press. And this led to “The House of Bernarda” finally being staged at UST Auditorium, to a packed house.

“It was a huge success,” raved Laurel in her book. “It was a glittering milestone in my life, my grand debut behind the proscenium.”

We travel through the years and Io, the time machine lands in 1968, as our protagonist, now Mrs. Laurel, joins Rep. She talks briefly to someone who she thought was a crew member, as the person was “in shorts and T-shirt and with cropped curly hair.” A few minutes later she learned that it was Bibot Amador, the Rep cofounder and director.

Soon she became exposed to the famous disciplinary style of Amador, with its ranting and raving. At one time she asked the director to stop this shouting, this terrorizing of her actors. To her surprise, Amador agreed. And she kept quiet for several weeks until she couldn’t stand it anymore and started shouting and raving again; and Io, the performance of the actors improved.

Along with the bellowing and cursing, however, came a more introspective way of directing: “She never imposed her acting or interpretation of a role. Rather, she watched intently what you created during rehearsals. She watched keenly not only with an eye of a critic, but also that of an audience expecting to be entertained. She drew from your wealth of emotions what was needed to make the role you are playing alive and believable.”

Amador directed Laurel in 47 out of the 52 plays she did for the Rep. Her last play was “The Cemetery Club” in 1992, after which she retired from acting but stayed on at Rep as a production and costume designer. This was a task she was well equipped to handle, as she had been a Fine Arts student at UP.

What are the insights gained and lessons to impart in her long and productive life? Through her family the veteran actress sent this reply, in effect the golden rule she lives by: “To put to good use the talents that you are given and also to look at the beautiful things in life.”

Her book ends with a paean to heavenly guidance: “I believe that in every production design and costume created, and in every role played as an actress, I had the Master Director leading me on and blessing my works. To Him I offered them all, as I would in every role played behind the proscenium.” —CONTRIBUTED INQ