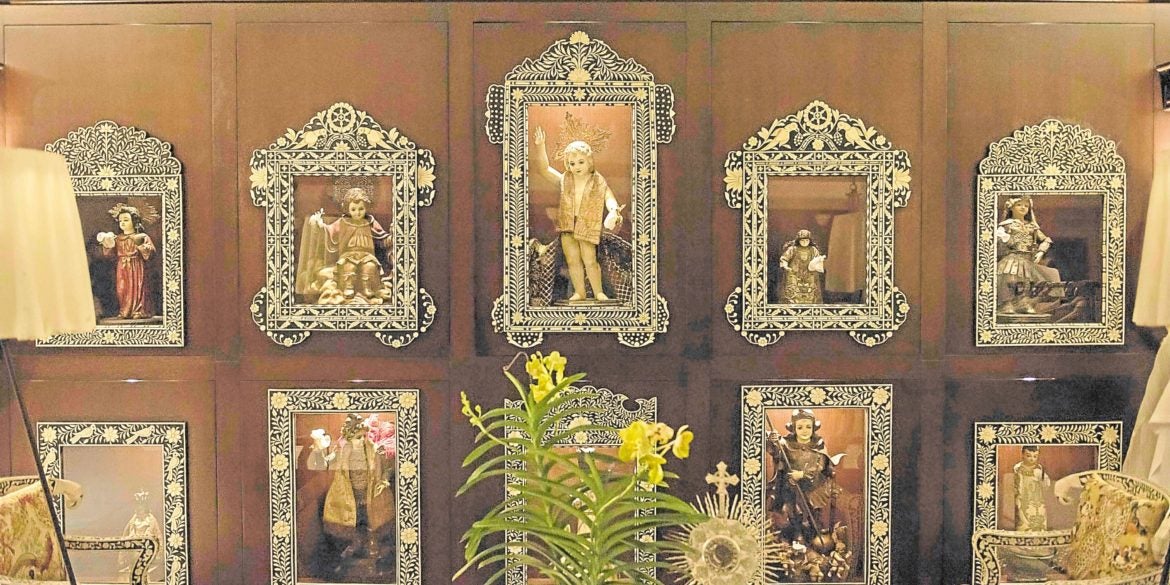 The niche, an African hardwood wall with alcoves for the Holy Infant, framed with cattle and ox bones

Envoys Amelia “Mellie” Ablaza and her husband Luis Jr. pose for a Facebook post in their living room in front of a curved glass table, atop which a monstrance solemnly stands.

A vessel for the Eucharistic host, the monstrance is traditionally seen only on special church occasions. This one—made of silver, with exquisite rays—was used in religious processions. The Ablazas’ designer son, Luis Romero Ablaza III—Junjun to friends—has proudly made it a statement piece alongside intricately carved silver candlesticks.

The Ablaza collection of religious art is impressive for its size. It has taken three homes to display the pieces, and many are still in storage. The most important ones, which include travel mementos, are in the Ablaza residence in Makati. The heirlooms are in Quezon City. The near life-size statues paraded in major processions before the pandemic are stored in the family estate in Cavite.

Mellie recalls that when the Makati home was being built, she envisioned it as a house for the santos. The residence currently shelters a wide variety—from ivory heads of the Holy Family set on a Lalique table in the foyer and the Sto. Niño in a velvet robe on the stairwell to paintings and other pieces of sculpture in a second-floor gallery, reliefs lining the corridors and an antique altar in a prayer room.

The collection reveals not only the Ablazas’ enthusiasm for collecting, but also the mother-and-son dynamic. Mellie and Junjun were inclined to go on unplanned shopping expeditions during their travels pre-COVID.

When a supplier presented an item of interest—an icon, or a religious accessory—mother and son invariably consulted each other, although then as now, Mellie and Junjun had distinct motivations for collecting. While each piece is an expression of faith for Mellie, Junjun sees it as either memorabilia or decorative art. Neither one is the research-driven type; they are both fueled by pure passion.

The part of the current collection that we are seeing today consists of pieces that range in character and style from crude folk art and tourist kitsch to the finely crafted and classic. These contrasts generate visual excitement. The santos are like puppets brought to life in Junjun’s hands through his magical arrangements.

On the second floor, formality is suggested by the orderly display of the 10 iterations of the Sto. Niño. Each one is individually set in a niche and elaborately framed in carved cattle bones with ox bone inlay made in India.

Against a wall of African wenge hardwood, each niche heightens the uniqueness of the icon inside. One Sto. Niño is clad in a robe with silver filigree, another is dressed like a centurion, and yet another is dressed in hammered brass “softened” by an ostrich feather on his back.

Then there is the one wearing a pure gold crown and holding a golden orb. Possibly the most valuable are the solid ivory icons, one of which is named Sto. Niño dela Familia Ablaza.

Junjun says the oldest is five feet tall, wearing a halo of rays, draped around the waist and holding a gold chalice. Housed in Cavite, this was a staple in past processions.

Another wall is devoted to paintings of the Blessed Virgin purchased in a souvenir shop at the Peru airport in the 1990s. Junjun recalls that his mother and his sister Czarina each wore one of those paintings sewn onto their gowns during the Philippine Centennial Parade in 1998.

Rare carvings are displayed alongside travel souvenirs, such as Russian folk art of saints and French tapestries of the Madonna and Child. Among the unusual finds are religious tapestries from Myanmar. Some years ago, Mellie, who is honorary consul of Guatemala (Luis Jr. is honorary consul of Zambia), was invited by the Myanmar ambassador’s wife to join a cultural trip. The Filipino contingent came upon an artisan community that made special embroidery with religious subjects. She bought several, fascinated that a Buddhist country could produce Christian-inspired crafts.

Czarina’s bedroom has become a repository of treasures as well, such as 13 vignettes of Christ, from the holy family to the Agony in the Garden. The artworks are encrusted with minuscule precious stones.

Another hallway is lined with reliefs and woodcarvings of the Sto. Niño and the Blessed Virgin, which Junjun purchased in a shop in Boracay.

His personal favorite is a Mother and Child relief made from exotic hardwood. He doesn’t know its origin, but says he was drawn to it by the fine handwork and the peaceful vibe that it exudes.

The prayer room can overwhelm any visitor with the cornucopia of santos and candleholders meticulously clustered on tables and in strategic corners for a tasteful overall composition.

Naturally, the focal point is the antique silver altar with a carved tabernacle from Sariaya, Quezon, and an antique crucifix.

If the Ablaza house were a gallery, Mellie would be the patron and Junjun, the curator.

The designer cultivated his taste for religious art from his mother. He accompanied her to antique shops and flea markets where he couldn’t help noticing that she made purchases instinctively.

He started collecting on his own when he moved to a condo unit in Greenhills in the late ’80s. “I had altar fronts, life-size statues of St. Joseph and Our Lady of Fatima, and Sto. Niños,” he recalls. “My home looked like a chapel.”

Only a few months ago, he and his mother acquired a 4-inch, 18-karat gold crown for one of the Sto. Niños.

Mellie likewise gave her collection of gold crosses, which Junjun, who studied at Gemological Institute of America, has made into fashionable ear curves, earrings, necklaces and bracelets.

Mellie has an heirloom santo collection that reflects her roots. She grew up in a devotional environment with her prayerful mother and grandmother, who would implore the santos’ miraculous intervention, certain that God would listen.

The more a religious artwork’s vibe resonates with her, Mellie says, the more she finds it attractive. “The visual is secondary; it’s the energy that touches my heart. I pray a lot—that’s why I am disposed to collecting religious icons and paintings.”

Like her mother and grandmother before her, she has faith in the powers of the saints and religious objects as the fruit of their connection with God. “I feel they are always with me, guiding me by pointing out what’s right and wrong,” she says.

Mellie is fascinated by the Sto. Niño statues most of all. She feels that each one evokes its own quality or power. One of her earliest personal acquisitions in the early ’70s was a pure ivory Sto. Niño, which captivated her for the way it radiated purity.

Both Sto. Niño devotees, she and her husband were hermano and hermana mayores of the Congregacion del Nombre Santissimo del Niño Jesus processions for 30 consecutive years. They had their own carroza built for that big event held in January.

Mellie cites the statue of Our Lady of the Miraculous Medal—also known as Our Lady of Graces—as another of her favorites as it dominates the prayer room. The recorded feast day of this delineation of the Blessed Virgin is Nov. 27, Mellie’s birthday. On Nov. 27, 1830, Mary is said to have appeared for the second time to a French convent novice, now St. Catherine Laboure, showing her a medal that would “shower abundant graces on anyone who wears it with confidence.”

More recently, a study that famously linked religiousness to happiness concluded that individuals who are actively engaged in religious practices are more content and optimistic than others, and more likely to find purpose in life.

Even in this pandemic, while they’ve put a halt on acquisitions, the Ablazas’ religious art collection continues to be meticulously cared for.

Melllie says gazing at her Sto. Niños makes her look younger than her 80 years. “Their faces are the reason that I smile a lot and remain unburdened.” —CONTRIBUTED INQ