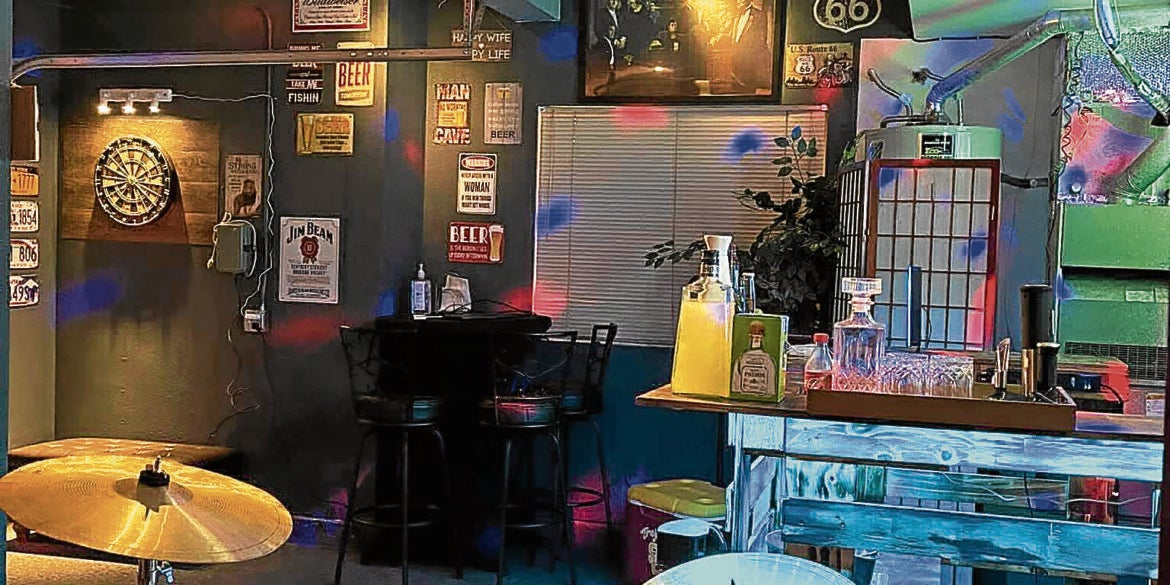 Whether it’s music or games, Jaycee Yap Borja’s space has them covered.

Why guys need a man cave

Their reasons vary but the goal is the same

Filipino men have their own definition of what a man cave is.

Traditionally, it is an area of the house where a guy can keep his prized possessions away from his family. It’s a spot where the so-called toys for the big boys are proudly displayed and shared with his friends. Ideally, it’s supposed to be big enough to host his friends to watch sporting events.

But for most Filipino families, boundaries like these are nonexistent. Man caves still feature what the man of the house treasures the most, but it is often shared with loved ones at home, and by choice.

That can be said of Jaycee Yap Borja who converted their garage into what he calls a family man cave. It has a bar made of a wooden pallet, leather couch, drum set, dining area, dart boards and the quintessential television for videoke.

“It’s not that I need a man cave, it’s more that I want one,” Borja said. “I see my man cave as an achievement as it is one of my DIY projects around the house.”

Borja painted the walls himself, built the bar and hung the decorations. Because he did the work, he saved on labor and only spent for the materials. He spends time in his space every day, to drink coffee in the morning and to unwind after work.

Patrick Tantoco Villavicencio also created a space for himself, but it’s the antithesis of the typical dark man cave. It’s bright, airy and his constant companions are all living things. His version of a man cave is a greenhouse.

It protects his most precious astrophytum plants. Villavicencio said that he even has a legitimate Miracle Kabuto, an astrophytum prized for its rarity because it cannot easily be reproduced. He takes pride in them so much that he started a Facebook page dedicated to his plants. His moniker is Astropinoy.

“I collected knives, lighters, guitars in the past but these plants are different,” he said.

“As I always say, buy a million-peso car and the moment it leaves the showroom, its value will drastically go down by 75 percent. But buy plants and their value will increase in years. These plants have been my priceless possessions through the years. They have been perfect stress relievers, especially in this pandemic. I feel God’s love from them especially as they grow and mature.”

Villavicencio said that the greenhouse is a recent addition to the backyard. He used to care for his plants in the laundry area.

“I made it my motivation to reward myself with plants at least once a week after doing laundry. Sinisipag din ako maglaba,” he said. It was when his collection grew that he saw the need to have their own space. He spends two to four hours every day in the greenhouse to check on his plants.

Paul Chung made it his business to build man caves. His company Sound and Vision Home Entertainment has been fulfilling men’s wildest dreams since 1991.

“Man caves usually feature three or more hobbies of guys,” Chung said. The most requested features are home theaters with a sound system that will satisfy the most fastidious audiophile, gaming (personal computer and console), bar, billiards and golf simulators, gym and a spot for their toy collection.”

Chung’s own man cave has an impressive home theater setup with a bar, gaming console and a display cabinet for his toy collection. He said any spare area would do. Planning the space is what makes the difference.

“Man caves need to have all your hobbies inside the room,” he said. “Since my man cave has a gym and theater, I don’t need to go out to watch a movie anymore.”Action figure collection

Romeo Lanzarrote wanted a space filled with all the things that he loves. “But I didn’t want it to look like a garage of some sort, so I made sure there’s ample space. I had my room built with a loft and then had my sister, Sharlene Lanzarrote, do the magic with the bedroom design and collection area in one,” he said.

His retreat includes high-end statues and action figures of his favorite superhero and video game characters. He has a gaming rig with themed board games that he can play with his family and friends. The loft also displays his book collection.

His space relaxes him, he said. His most prized possession? “It’s a tie between my Superman statue and my Hulkbuster. People often pitch in the age-old debate of Marvel vs DC, but as a fan of both, I’d say there’s a common ground in loving the two franchises as a collector. This is because not all characters from both lines are present in the toy and statue lines I collect so I’m happy to have any that I can add.”

The reasons for building these men’s man caves may differ, but their goal is the same: They serve as stress relievers to their owners.