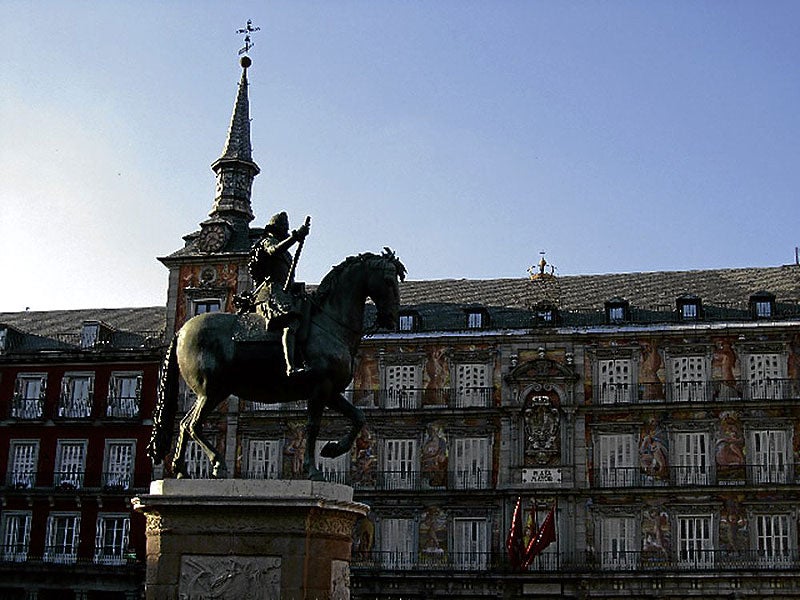 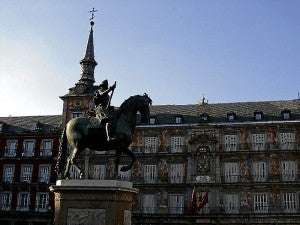 It was a coincidence that our trip to Spain was set just in time for us to be back when the celebration of José Rizal’s upcoming 150th birth anniversary was taking shape.  It became such an opportune time to have traced his historical footsteps in Madrid. Thanks to my husband, Robbie, who decided to join the 2011 Madrid Marathon.

In Madrid, we were fortunate to have a taste of the life of a Madrileño, being hosted by my El Escorial-based cousin-in-law, Gina Cariño, and her family. El Escorial is just an hour-long bus ride from Madrid.

At breakfast on our first day, Gina handed a printout of the places Rizal visited and experienced in the city.

We planned to tour on our own and grabbed the chance to retrace our national hero’s path. With its efficient subway and commute system, one can walk Madrid which is known as the “great walking city.”

The bus ride didn’t seem so long, marked with beautiful sights.  Gina would point out relevant places such as the Universidad de Madrid where Rizal studied, historical museums, beautiful parks, the best restaurants and other landmarks Rizal frequented.

After meeting up with our friend, Alfonso, for some wine and tapas that included the unforgettable Blood Morcilla in Los Bocadillos, off we excitedly went to explore the city.

Our first stop was the Plaza Mayor, a grand arcaded square in the center of Madrid, which is very popular with tourists and locals. It’s a   symmetrical rectangular square with uniform architecture, similar to other plazas in Europe. 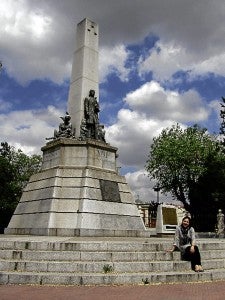 Much of the history of Madrid and Spain is tied to this 17th-century plaza. It has a festive atmosphere, with a free concert, a colorful street art, a coin and stamp show, and residents and tourists taking afternoon strolls.

Plaza Mayor is surrounded by restaurants with al fresco tables. Take a seat in one and a waiter will come from one of the restos, menu in hand, ready to serve your choice of tapas and sangria.

On historic narrow cobblestone streets around Plaza Mayor, we searched key places identified with Rizal. With city maps, we spotted Calle de Atocha, where the La Solidaridad was published.  The newspaper, founded in 1889, was the voice of the Filipino community in Spain in the struggle for recognition by the Spanish government.  It is also said that Rizal frequented the vicinity to monitor the printing of his essays, the most famous of which became “La Indolencia de los Filipinos.”

(My rough Spanish translation: “The Philippine national hero Dr. José Rizal and his compatriots would meet in this place to plan their collaborative efforts in favor of reforms and civil liberties in the Philippines.”)

Little did we know that the marker was right beside Viva Madrid, another place famous for its beautiful murals of azulejos or glazed tiles, where Rizal used to take his meals with wine.  It was also the favorite place of Graciano Lopez Jaena, where he would enjoy his usual copa de vino while admiring beautiful women passing by. No wonder he had the reputation of being “a man of the world and of wine.”  Sometimes they needed to unwind to jumpstart their writing and meet deadlines for the issues of La Solidaridad.

Also frequented by the Filipino Propaganda Movement of 1882 was Los Gabrieles along Calle Echagaray.  In one of Rizal’s letters to his sisters, he described two murals made of ceramic tiles displayed in its halls.  This particular letter was  published by the Comision Nacional del Centenario Rizal in 1961.

Along the same street, we got to the famous Hotel Ingles, where the Filipino community in Madrid marked or celebrated its most important events.

On June 25, 1884, Pedro Paterno hosted a banquet in honor of Juan Luna and Felix Resurrecion Hidalgo at the hotel’s Restaurante Ingles for their having won first and third prizes, respectively, at the internationally acclaimed Exposicion de Bellas Artes de Madrid. Luna’s winning entry was the “Spoliarium” while Hidalgo’s, the “Virgenes Cristianas.”

It is on this occasion that Paterno asked Rizal to propose a toast to their victory.  From research, I learned that Rizal had not eaten that whole day since he had no money and this was actually written in code in his diary, which was later translated by Miguel Unamuno, a Spanish intellectual of the “Generacion del 98,” upon the request of Wencheslao Retana.

As translated by Leon Ma. Guerrero, Rizal’s toast was also “for those who have helped them in the arduous paths of art, for the youth of the Philippines, for the sacred hope of his country, and that Mother Spain, solicitous and ever mindful of the good of her provinces, may put into effect the reforms that she has long planned.”

The next day, all the leading dailies commented on the speech of the young Filipino gentleman named José Rizal. But it did not take long for the accolade to reach the Spanish authorities, as well as the friars in the Philippines. So while admiring the well-preserved interiors of the Hotel Ingles, I wondered, was our national hero aware of what could happen next?

The place retains its 19th-century ambience and has a prominent marker written in Spanish, commemorating the historic banquet where Rizal and company lauded Luna and Hidalgo.

Aside from the Luna-Hidalgo banquet, the Filipino community would sometimes hold its cenas in the hotel to celebrate the New Year.  Even today, Hotel Ingles is where the Filipino community marks important events, including the centennial celebration of the  Revolution and the First Republic, attended by then President Fidel Ramos.

The second day of our Madrid tour was especially memorable.  Right after accompanying my husband to pick up his running pack in Casa de Campo for the much-awaited Madrid Marathon, we,  with my mother-in-law and daughter Sabine, took the cab and headed to the corner of Calle Santander going to Avenida de Filipinas—a street intersection where the replica of the José Rizal’s monument in Luneta Park stands. The landmark shows Rizal  in a European coat,  a book  in hand. Unlike in the Luneta Park monument which portrays our hero looking sideways, in this Madrid statue, he stares right upfront.

The monument was erected and inaugurated in 1996 to mark the centennial of Rizal’s birth. Engraved in brass is Rizal’s “Mi Ultimo Adios” and its Tagalog translation, “Huling Paalam.”

We then walked between the Guzman el Bueno and Canal stations, where the Islas Filipinas Metro subway station is located.

Since the Madrid Marathon fell on the third day of our trip, our Basque cousin-in-law, Juancho, drove my husband to the starting line in Paseo de Recoletos as early as 8 a.m. The rest of us followed to further explore the city, and later on cheer at the finish line.

On the way, just east of the city center, we passed by a beautiful spot partially laid out in a formal French style—the Parque del Buen Retiro or Retiro Park, which in many writings is said to be  Rizal’s favorite park and haunt. Retiro stands for retreat, and it is the same historical landmark that inspired Rizal to name his place of exile in Dapitan, Zamboanga del Norte as “Mi Retiro.”

The palace was built in 1632 by King Philip IV as a retreat place for the royal family. At that time, the park was well outside the city walls, but now Madrid has completely enclosed the Parque del Buen Retiro.

Said to be the most popular park in Madrid, it has its main entrance near the Alcala Gate, at the Plaza de la Independence.

This was also the site of the Exposición de Filipinas of 1887 where Philippine artifacts, art works and botanical specimens were exhibited.  According to our El Escorial-based relatives, it can get crowded during weekends when many Madrilenian families go for a stroll, with street musicians, sidewalk painters, fortune tellers, jugglers and street performers livening up the place.

Not far from the Retiro Park is the Museo Nacional del Prado or Prado Museum, where Rizal must have chanced upon the 1525 “Noli Me Tangere” painting by Antonio Allegu Llamado Corregio, who lived from 1493 to 1534. The painting shows an angel refusing to be touched by a mortal. In 1887, Rizal wrote the novel “Noli Me Tangere,” which would be the literary beacon of generations of Filipinos to come.

One of the most visited attractions in Madrid, the Prado Museum, summons the attention of lovers of great art from all over the world. It houses the world’s finest collection of Spanish art, with extensive examples of works by El Greco, Velazquez, Goya, and Murillo. And because the collection is so vast, only about one-seventh of the museum’s entire permanent holdings are displayed at a single time.

From all the insightful walking and my husband’s 42-km run, we needed a hearty lunch  so we headed to Casa Santoña where a good friend of Juancho joined us. In Calle de Núñez de Balboa, this is where I have, by far, tasted the best anchovies and Tocino del Cielo!

It was late afternoon and while everyone headed back to El Escorial to call it a day, Juancho took me and Robbie to the Atocha Train Station to get tickets for our Portugal trip and be familiar with the train lines and gates.  This station is also said to be where Rizal arrived in 1882, then named Estación de Mediodía.

Later, Robbie and I took the bus to satisfy the foodies in us at Plaza San Miguel where we visited the famous San Miguel Market or ‘Mercado de San Miguel.’

Located in a remarkable turn-of-the-20th-century building, San Miguel Market has striking ornamental detail achieved with the use of paint and wrought iron.  The place was packed with locals and tourists and offered anything you can ever think of—from oysters, fish, cheese, sweets, breads, panetones, wine, sushi, fruits, to juices, smoothies. The place was filled with fresh produce, pasta, meat, even cookbooks and plants.

There are also cafés and mini-restaurants offering specialty food, from tapas to                         international cuisine. I was particularly amazed with the caviar pie that sold for 3 Euros each, the variety of paella, macarons in different flavors and colors, the truffles, wine!  It’s a totally amazing food destination and it made for one of my most memorable dining spots on our entire trip.

In the vicinity of San Miguel Market, we traced the address where Rizal lived upon his arrival from Paris for his summer vacation.  He changed his residence from 34 Barquillo St. to 7 San Miguel.  This fact was indicated in a letter that Rizal sent  his parents on Sept. 11, 1883, and there he paid 4 ptas. a day, excluding the cost of kerosene which he had to buy separately  to have light.

Before the door with the number 7 address, I took a photo of Robbie.

Rizal’s long stay in Madrid included years of writing and lobbying for our country’s freedom, and to be able to retrace his footsteps, experiencing century-old hotels and cafes where the hero’s compatriots once gathered, gave me a genuine sense of pride and patriotism.

And as we celebrate the 150th birth anniversary of José Rizal, I hope that sharing my story may rekindle the fire of Pinoy pride and encourage others to look deeper into his world-changing ideas.