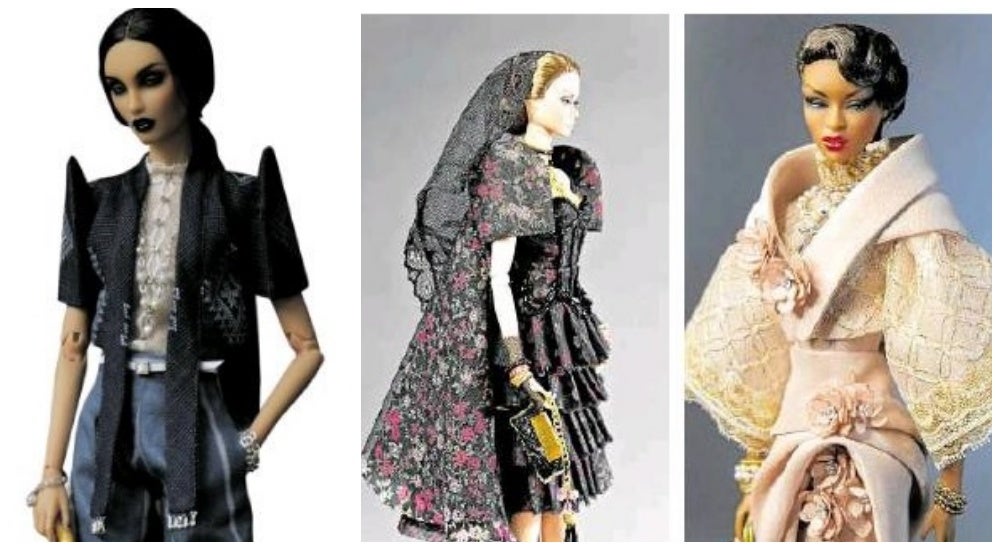 Beyond Barbie: A closer look at doll-scale couture

Cholo Ayuyao has always been interested in the creative side of fashion. For well over a decade, he busied himself crafting costume jewelry, putting the different and separate components together to create eye-catching pieces.

He became known in the design community in Pampanga, where he is based, for his attention to detail, so clients came knocking.

“I would do subcontractor work for the designers here. I was tapped to handle the finishing touches for the gowns they designed. In a way, I would do the designers’ ‘dirty’ work. They were the ones in front while my staff and I were in the background,” Ayuyao told Lifestyle.

It was also around this time that he “adopted” a troubled friend who introduced Ayuyao to his fascination with dolls.

“Since my work revolved around accessories and finishings, I experimented by making clothes for the 16-inch-tall dolls. I posted images on Flickr—Facebook wasn’t as popular then and Instagram hadn’t been invented—and was surprised at the interest shown by international collectors,” he said.

They contacted him asking if he was willing to do commissioned work. The interest in his work was flattering, to say the least, and Ayuyao began to envision his childhood dream of designing clothes becoming a reality.

He didn’t stop accepting finishing jobs, though, because he had a staff of 10 that depended on him for their livelihoods. Doing the finishing for gowns continues to be his main line of work—with just two of his original workers left—but now he had something to indulge in, a passion on which to unleash his creativity.

The years he had spent focusing on details and tracing designs with glass beads and sequins prepared him for doll-scale design. On his Instagram (@cholodollcouturephilippines), Ayuyao posts images of his works in progress and his glamazon-like dolls in dresses that showcase his keen eye for detail. He makes the sets and backgrounds himself, poses the dolls in all their finery, and photographs them.

He could easily monetize the interest in his creations, but Ayuyao makes it a point to compartmentalize.

“I never thought of [doll design] as a business because when I do something with passion, I make it a point to delineate. I don’t design dresses for the dolls with the intention to sell—that’s probably why I’m poor,” he said.

Despite this, his work has been noticed and was even featured in the two editions of TernoCon held in 2018 and 2020.

Ayuyao basically creates for the sake of creating. He is grateful to have this passion during the pandemic, when his mental health is fragile and his anxiety is at a high level.

“I want to focus my energy on creating. I consider myself lucky because when I wake up in the morning feeling anxious, I just force myself to work, work, work.”

Although Ayuyao can craft a killer evening gown, his experiments on the terno are notable for his attempts to make it more wearable. Reverse designing

Doll-scale designing is different from designing for humans because one has to look at the available fabric choices before coming up with a design. He describes it as a form of “reverse designing.”

Fortunately, Ayuyao has many of the components at his fingertips: the glass beads and sequins, tiny bows and miniature zippers. His favorite item, and the one he often reaches for when designing, is skin-tone tulle.

“Based on my body of work, I’ve used this type of tulle the most because you can do so much with it. Tulle can be used as the base for a dress or in multiple layers for volume. You can treat it in so many ways,” he said.

He realized after chatting with Windell Madis, a former TernoCon contestant, that all those who had been part of the terno competition were chosen for a reason.

He uses his Instagram to “seed ideas” to his 42,000 followers to help them realize how the terno can be worn in contemporary ways. A recent post shows a sporty model in an open terno top worn with the ease of a varsity jacket, and paired with slightly flared pants with athletic stripes running down the length of the legs.

“We were bestowed a mission to slowly ease the terno back into the streets, because that’s what the terno is—it’s not just formal wear. It’s a Filipino garment that was and can be worn again regularly,” Ayuyao said. INQ