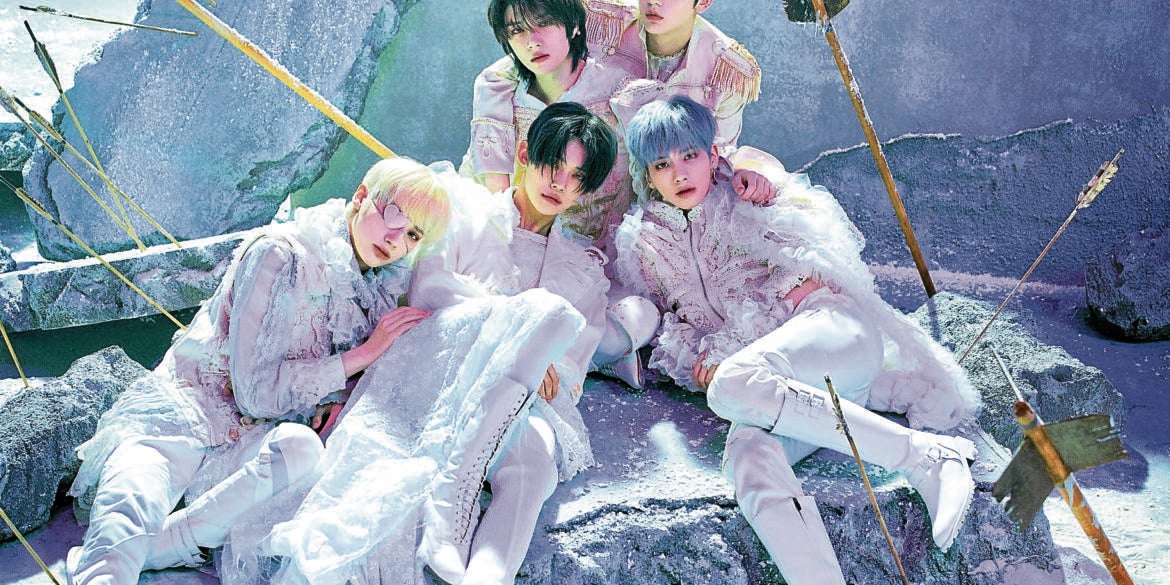 TOMORROW X TOGETHER, known as K-pop’s fourth-generation leaders, released their second studio album “The Chaos Chapter: Freeze” on May 31. The boys debuted No. 1 on several global album sale charts, while also marking their highest chart placement on the US Billboard 200 at No. 5. —PHOTOS FROM BIGHIT MUSIC

TXT longs for connection in ‘The Chaos Chapter: Freeze’

Since their 2019 debut, TOMORROW X TOGETHER’s (TXT) ever-expanding narrative has always delved into the punishing realities of life. The boys have since made their mark as storytellers, weaving a whimsical world of adolescence with their debut trilogy “The Dream Chapter (TDC).”

But for a group that has heavily banked on the promise of Tomorrow, what happens when it suddenly ceases to exist? In a world wrecked by a global pandemic, Soobin, Yeonjun, Beomgyu, Taehyun and Hueningkai manage to meet the moment with their latest offering, “The Chaos Chapter: Freeze.”

“Freeze,” released on May 31, is TXT’s second full-length album. Crafted around the idea of a boy suspended in the middle of the onslaught of the world, “Freeze” is an anguish-filled longing for connection in the bleak landscape of isolation.

“I don’t know who loves me …” sings Taehyun in “Anti-Romantic,” which opens the turbulent eight-track album. With heartsick vocals, the boys are hesitant, carefully confessing their cynical thoughts on romance in a slow burning ballad that is as gentle as it is heartbreaking.

“0X1=LOVESONG (I Know I Love You)” on the other hand, swells in your chest, a pop-rock triumph about a hungry search for salvation. It sets TXT in the grim reality of youth, over churning guitars and doomsday drums, so lush and intense as they wail about the end-all be-all that is love.

“You can say that adolescence is a hole universally present in the lives of everyone,” reads the opening salvo of the track’s music video. “0X1=LOVESONG,” mines this gritty nostalgia, trying to fill that void with an almost cataclysmic love. Featuring the voices of rising soloist Seori with lyrics cowritten by BTS’ RM, it is exactly the kind of unique track you’d expect from a group hailed as fourth-generation leaders of the K-pop industry.

Their first all-English single “Magic” cuts through all this angst with a sugary rush of energy. With the makings of a classic pop track, the boys excitedly ask an imaginary crowd, “Clap your hands, if you’ve got a broken heart, just take a chance.”

In contrast, TXT are unnervingly blasé in “Ice Cream,” a sickeningly sweet tune shrouded in deviousness: “I feel like I’m the only one that’s been robbed / It’s unfair / So everything shall be doomed.” The sudden sonic twist is almost as sinister as its lyrics, where they come to terms with the consequences of their “slightly mean wish,” when everyone ends up trapped in the confines of their rooms.

Soobin, who contributed to the lyrics, somehow connects with the track’s pessimism and blatant pettiness. “To be honest, we all sometimes have these sorts of wrong thoughts, like, ‘Why am I the only one ruining things?’” he says in an interview with Weverse Magazine.

“What if I had been that PUMA” is TXT’s more playful take on their previous song “PUMA” (2020). Yeonjun, Beomgyu and Taehyun, who worked on the lyrics, take inspiration from “Balance Game,” something they love to play with their fans where they have to choose between A or B. The track places the boys in the shoes of the puma faced with a choice: to find freedom away from its cage or to stay trapped?

So what happens then when you’re left with no choice but to spend the golden days of youth cornered into your home? In the funky “No Rules,” TXT lets their pandemic anxiety catch up to them. The lyrics unfold like a typical quarantine diary: “Is it a.m. or p.m. right now? / I’m confused because of all the broken patterns.” The track unravels like a loose thread, slowly coming apart at the seams as they start to confront the afterimage of a world changed forever by the pandemic (“Even if the limits are lifted, I feel insane”).

“Dear Sputnik” is a throttling rock track, helmed by Hueningkai, who makes his debut as a producer. “While I made it, I imagined putting on a concert, running around with the other members and having a ton of fun with MOA (TXT’s fandom’s name),” he says.

The slow descent into madness culminates in the hyperpop masterpiece “Frost,” where they team up with singer-songwriter Ashnikko. There’s nothing more clear-cut than the line “losing my mind” to describe this album’s back and forth.

TXT has always immersed us into their own universe, drawing themselves as unforgettable protagonists as they explore the trials and tribulations of growing up. “Freeze” breathes this uncertainty, every song a flipped idea of the next. Where “Magic” is unapologetically guileless, “Ice Cream” is deceptively cunning.

It marks the end of TDC, where TXT found sanctuary in a romanticized space of youth and friendship, relating rose-colored stories of everyday teens in intricate imagery. In “The Chaos Chapter (TCC),” they invite their listeners to an unbridled collection of transient musings, off-kilter and still trying to find the right balance as they come face to face with adulthood.

While their previous release “Minisode: Blue Hour” (2020) is a glossier acceptance of a summer lost in a pandemic, “Freeze,” an official part of TCC, inspires to do the exact opposite. It’s an unburdening, an eruption of every little frustration cultivated in the trappings of quarantine. Masked in hyperpop beats and rock stylings, the record is a clever confrontation of growing pains amid crisis.

“Freeze” debuted at No. 5 on the US Billboard 200, with a total of 43,000 album units in its first week. This marks the group’s highest and longest US chart placement yet, also boasting a No. 1 in the Top Album Sales chart. “0X1=LOVESONG” also earned TXT their first entry into the Billboard Global 200 Singles chart.

“Our members have always been young and innocent, but I think that youthfulness really added a kind of healthy robustness to this album,” says Soobin. “All five of us helped write a lot of it and the songs and dances are all in our favorite styles so we put a ton of effort into practicing,” he adds.

The boys all have credits in the album, with each member heavily involved in composing and songwriting. “Freeze” bleeds TXT in every way imaginable, with each member’s heart tangible in every lyric and beat. It’s Soobin’s coming of age, Yeonjun’s growing genius, Beomgyu’s vulnerability, Taehyun’s perseverance and Hueningkai’s optimism, all in one record.

The boys are young, fearless and unbound, eager to explore what the years ahead have in store for them. There’s nothing more formidable than an artist who knows exactly what their purpose is, and TXT are comfortable in their talents, effortlessly evolving into protean musicians with every release.