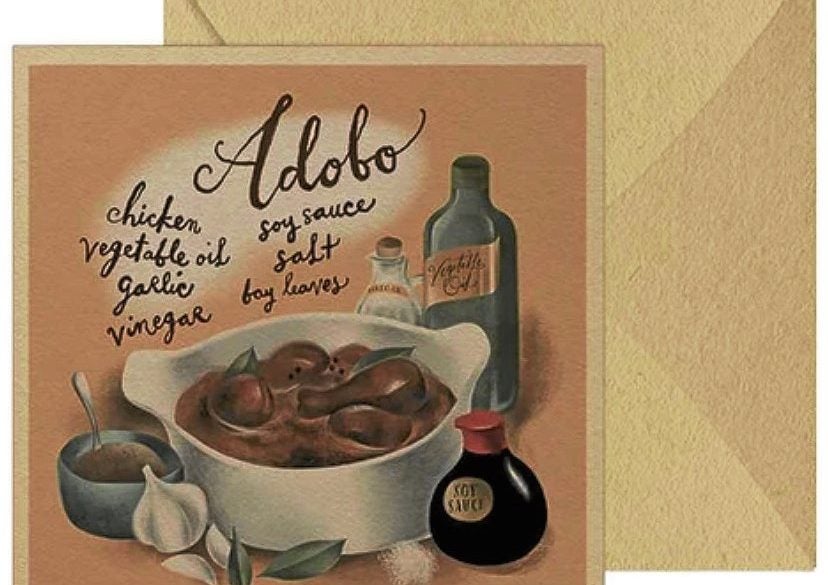 This newspaper ran an adobo column for years without running out of recipes. And that’s the beauty of our unofficial national dish

In the house I grew up in, my grandma made two kinds of adobo, none of which had soy sauce. The first one, my favorite, is her crispy adobo—deep-fried pieces of liempo drizzled with a sauce made of vinegar, laurel, garlic and black peppercorns. It is best eaten hot from the stove, when the skin is still crunchy and the meat hasn’t been made soggy by the sauce.

She calls the other one adobong puti—chicken in a sauce that’s also made with vinegar, garlic, black pepper and laurel. But the chicken isn’t fried to a crisp. It simmers in its sauce until the meat is tender and flavorful.

My grandma, now 93, doesn’t spend time in the kitchen anymore—it is Melinda, her trusted cook since I was in high school, who carries on her adobo traditions.

My other grandma makes the more popular version of adobo—that beautiful mix of soy sauce and vinegar, garlic and laurel, that we all know and love. It changes: Sometimes it’s just pork, sometimes it’s a mix of pork and chicken. What doesn’t change is how she always makes a ton of it—enough to feed her household and ours, my uncle’s and sometimes even her friends’.

I used to say that maybe my grandma makes her adobo in that magic porridge pot from the fairy tale because it’s like it never runs out. And that’s a good thing. Because her adobo just keeps tasting better and better, days after it’s cooked. When I want a comforting meal, there’s nothing like piping-hot rice topped with her adobo sauce and the little bits of meat left at the bottom of the pan.

A friend’s family cook adds hard-boiled eggs to her adobo, making it the perfect heavy, protein-rich food for our camping trips.

Another friend’s mom adds quail eggs to her adobo and it’s absolutely delicious.

I write this next part with shame. Back when I was living with my Persian boyfriend (well, ex now), it was he, and not the Filipino in the relationship, who would cook adobo in our tiny apartment. His version was spicy, heavy on the vinegar and had the addition of marble potatoes. When I brought home Iranian saffron from Little Persia in Los Angeles, he made saffron adobo with three kinds of meat.

But why am I talking about adobo? Because earlier this week, it was announced that the Bureau of Philippine Standards under the Department of Trade and Industry (DTI) had formed a technical committee that would create a national standard for Filipino dishes, the first of which is adobo.

The news was met with backlash, with many posts on social media saying the same thing: Leave adobo alone.

@Punongbayan_ wrote: “Ask 10 households about their adobo recipes and you will get 10 answers . . . ”

It’s true. This newspaper ran an adobo column for years without running out of recipes. Heck, even TGIFriday’s serves adobo here. And that’s the beauty of our unofficial national dish—everyone has their own version and every version has its own story.

There was so much negative buzz online about the standardization of adobo that Trade Secretary Mon Lopez had to make clarifications.

They’re basically trying to do what Thailand did in 2013. Their National Innovation Agency created standard recipes for tom yam goong, massamun and pad Thai so Thai food would taste the same in Thai restaurants all over the world.

So don’t worry, DTI is staying out of your mom and your lola’s kitchens.

I’d come up with a list of best places that serve adobo but I’m pretty sure you’d tell me that nothing beats the adobo they cook.

I will just quote Chris Costello’s tweet: “The best adobo is the one that’s available right now.” INQ