Martin, Pops to reunite in the US | Inquirer Lifestyle ❮ ❯ 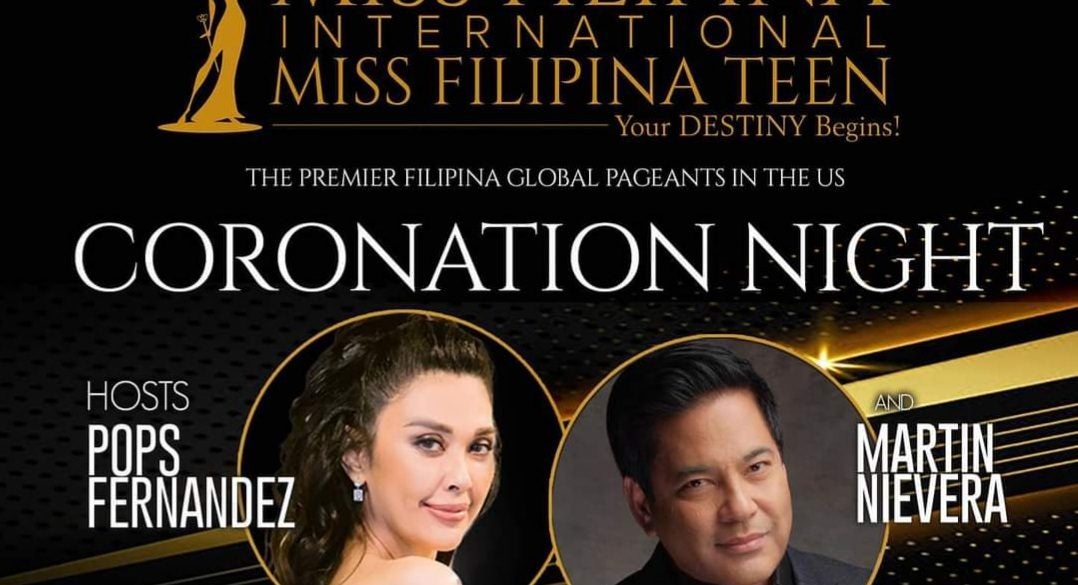 Martin, Pops to reunite in the US

MAKATI CITY, Philippines—The Philippines’ “concert king and queen” will be seen together in the United States later this month, and will once again share the stage like they did in the past.

Filipino music royalties Martin Nievera and Pops Fernandez will reprise their roles as hosts in the 2021 Miss Filipina International and Miss Filipina Teen pageants, like they did during the twin contests’ previous edition.

Organizer Mildred Deang said the presence of the musical duo, as returning hosts, is a testament to how the California-based pageant has grown since its inception eight years ago, when it was then called the “Binibining Pilipinas-USA” pageant.

The competition for Filipino-American women and overseas-based Filipinos was rebranded as “Miss Filipina International” in its fifth edition. Deang explained at a recent virtual media conference that some of the candidates had a hard time pronouncing “Binibini” and the Filipino word also became confusing for the largely American spectators who read it on the candidates’ and winners’ sashes whenever they make appearances.

Strategic Media Consultant Winston Enano also said it became a lot easier to pitch “Miss Filipina International” to US media. “There were not a lot of question what it was about,” he shared.

The pageant prides itself in being the only U.S.-based pageant supported by the Philippine Department of Tourism (DOT). Its winners become ambassadors of the Philippines, showcasing the various tourist destinations in the country.

Part of its winners’ price package includes a free trip to the Philippines, where the winners get the rare opportunity of discovering their Filipino roots without their parents and family around them, exploring the islands with their own eyes.

The candidates themselves choose a place or spot to highlight, and promote on stage. Destinations in the Philippines are also made prominent during the competition segments on stage.

The COVID-19 pandemic, and the restrictions it caused, prompted the organizers to suspend the pageants’ 2020 edition. Deang said they had already accepted some 80 applicants from around the US and different countries before the pandemic hit.

But because of the various flight and travel restrictions imposed in different countries, the twin pageants resumed with only 50 candidates—23 in the “Miss” division, and 27 in the “Teen” division.

Reyes said the organization measures the pageants’ success “on the individual candidates themselves, rather than the world at large.”

He explained: “Most times the ladies completely transform, from the time they joined until the coronation. Watching them before our eyes transform from a caterpillar into a butterfly is what we enjoy the most in producing the pageants.”

One of its former winners is current Ginebra calendar girl Christelle Abello, who traces her roots in Aklan.

After bagging the Bb. Pilipinas-USA crown in 2016, Abello flew to the Philippines to participate in the Miss World Philippines pageant, where she finished in the semifinals. Last year, she joined the Miss Universe Philippines contest and has returned to this year’s competition.

Deang said the renewed interest in discovering and promoting their Filipino roots makes the winners effective spokespersons for Philippine tourism.

“After their trip to the Philippines, they come back and talk about it with their friends, both Filipinos, and non-Filipinos,” she shared.

The pageants also enjoy wide viewership across the states via ABS-CBN’s The Filipino Channel.

This year, the contestants will take part in a preliminary show where they will showcase their national costumes and compete in swimsuits and gowns. It will be staged at the Redondo Beach Performing Arts Theater in Redondo Beach, California, on July 30, and will be hosted by 2014 Miss Earth Jamie Herrell, the second Filipino woman to win the international title.

The coronation ceremonies will be held in the same venue on July 31.